An Expert's Look into the 2014 IPO Market By Kyle Anderson

By: Money Morning
The 2014 IPO market has been busier than any year since the "Dot-Com" era of 1999 to 2001, with 94 companies holding an initial public offering through the month of April. For those unfamiliar with the inner workings of Wall Street firms, the IPO market and the IPO process can be complicated. Terms like "lock-up periods" and "offer prices" get tossed around frequently without any explanation. The post An Expert's Look into the 2014 IPO Market appeared first on Money Morning - Only the News You Can Profit From .

The 2014 IPO market has been busier than any year since the "dot-com" era of 1999-2001, with 94 companies holding an initial public offering through the month of April.

Through the first four months of the year, 138 companies have officially filed for IPOs. According to Renaissance Capital, every month in 2014 has far outpaced its average for IPO filings from the previous nine years. 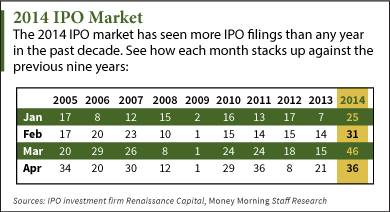 But for those unfamiliar with the inner workings of Wall Street firms, the IPO market and the IPO process can be complicated. Terms like "lock-up periods" and "offer prices" get tossed around frequently without any explanation.

Fortunately, Money Morning's Capital Wave Strategist Shah Gilani is an industry veteran and former hedge-fund manager who's had a unique look inside the IPO process.

That's why he addressed this recent reader question about investing in IPOs. Shah removed the mystery from the IPO process for retail investors and explained some of the more complicated factors... Take a look.

An Inside Look at Investing in the IPO Market

Reader Question:What is it about initial public offerings? Why do companies hold an IPO before putting their stock on the public market? How do you make sure you gain the most from IPOs? There is a lot of hype around IPOs. It makes me wonder: What are the hidden risks?

Answer from Shah Gilani: An IPO is when a business first sells shares of itself to the "public." IPOs are "priced" the night before they are launched. Basically, investment bankers discuss the market and the how they think the new shares will trade, and they usually have an expected range.

The IPO price is important because that's what the company gets for the shares it's selling. If you're the company, you'd rather get $25 than $20. After the stock is "open," shares move up and down based on investors and traders buying and selling. The company is out of the picture at that time.

However, company owners and employees and those investment bankers still own shares that were originally priced at the higher end of the scale. Eventually, they will want to sell some or all of their shares, and they will hope the price is a lot higher than $25, or they will have wished they had sold them at $25 on the opening day.

Now, the lock-up period refers to the restriction that prevents insiders - owners, CEOs, etc. - who hold stocks in the company before it goes public from selling them after it goes public, usually lasting 90 to 180 days.

But here's the thing: Because Wall Street tends to reserve the hottest issues for its "best" customers - the "ultimate insiders" of the U.S. financial markets - IPO deals can be tough for retail investors to get into right away. Is this fair? NO! But that's the game.

So what you'll want to do is to start paying attention to the stock immediately after the IPO.

There are many risks playing the IPO market. If you buy shares on the opening day, don't hang onto a losing trade. You can always sell the shares if they aren't doing what you expected. You can also buy more if they go down.

However, remember that you won't be playing the IPO game. That's a professional trader's game. That's why you want to start paying attention immediately following the IPO. For you, it should be about the company. Do you want to own shares in it or not, and what is a fair price to pay for their shares?

Do you invest in IPOs after they hit the market? Join the conversation on Twitter @moneymorning using #IPOs.

We've found a way to profit like a real estate mogul without even buying property. The formula is simple: Inflation + Real Estate = Cash in Your Pocket...

The post An Expert's Look into the 2014 IPO Market appeared first on Money Morning - Only the News You Can Profit From.