FONAR Celebrates Two Milestones: the 40th Birthday of the MRI Industry and the Impact of Joining the Russell 3000® Index 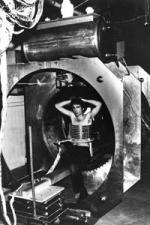 MELVILLE, N.Y., July 10, 2017 (GLOBE NEWSWIRE) -- FONAR Corporation (NASDAQ:FONR), The Inventor of MR Scanning™, celebrates the 40th  anniversary of the world’s first MRI picture, by FONAR’s founder, Raymond V. Damadian, M.D., and his team, on his human-size MRI machine, thereby birthing what has grown into a multi-billion-dollar industry. FONAR also celebrates the very positive impact of being included, as of June 26, in the Russell 3000® Indexes annual reconstitution, which has increased the Company’s membership in related index funds and ETFs (Exchange Traded Funds) to over 60, allowing mutual funds, institutions, and the investing community greater visibility of FONAR and helping to build shareholder value.

After many years of research, Dr. Damadian’s moment of truth began late on July 2, 1977 when his graduate student, Lawrence Minkoff, Ph.D., entered Indomitable.  The whole-body scan of Dr. Minkoff’s chest was completed at 4:45 A.M. on July 3, 1977.

MR scanning was proposed for the first time in the paper "Tumor Detection by Nuclear Magnetic Resonance" (Science, March 19, 1971). That paper reported that there are dramatic differences in the characteristic NMR (MRI) parameters, known as T1 and T2, between healthy and cancerous tissues, as well as between the healthy tissues themselves. It is precisely these differences that provide the exceptional anatomic contrast (pixel contrast) of the medical images generated by today's MRI scanners.

In February 1974, U.S. Patent #3,789,832 (filed March 17, 1972), “Apparatus and Method for Detecting Cancer in Tissue,” was granted. It was the world's first description of an apparatus and method for scanning the human body by MRI.  It was the first of 4,552 patents for MRI (as of 2/21/13) issued by the United States Patent Office. It introduced the T1 and T2 tissue relaxation differences reported in Science that provided the anatomic detail of the body's critical soft tissue VITAL organs (brain, kidney, heart, liver, muscle, intestine) that had been missing from medical images (x-ray images) for more than a century.  These T1 and T2 tissue relaxation differences discovered by Dr. Damadian became the foundation of nearly all of the images produced by today's MRI scanners.  The Company was successful with this patent in its litigation with General Electric that culminated in 1997 resulting in GE paying approximately $46.4 million for FONAR's cancer detection patent and an additional $82.3 million for its multi-angle oblique imaging patent.

Dr. Damadian said, “What I am most grateful for is that the MRI scanner is now found throughout the world, with over 20,000 installed world-wide and over 60 million MRI examinations being performed each year.  I am sincerely grateful for the blessing that has enabled me to help so many people.”

Timothy R. Damadian, President and CEO of FONAR said, “I remember being at an Independence Day family gathering the day my father and his team had finally achieved what they had been so diligently working on – the first MRI picture. I was just 13 years old then. I remember my family and I being very happy and proud of him, but, frankly, I had no sense whatsoever of the importance of that event. Having said that, I’m not sure there were many people, if any, back then who recognized his achievement as a medical game-changer, aside from my father, that is. He went on to build FONAR and launched an industry that has helped countless numbers of people the world over. I remain proud of him and am grateful for the opportunity to be part of his adventure.”

FONAR, The Inventor of MR Scanning™, located in Melville, NY, was incorporated in 1978 and is the first, oldest and most experienced MRI company in the industry. FONAR introduced the world's first commercial MRI in 1980, and went public in 1981. FONAR's signature product is the FONAR UPRIGHT® Multi-Position™ MRI (also known as the STAND-UP® MRI), the only whole-body MRI that performs Position™ imaging (pMRI™) and scans patients in numerous weight-bearing positions, i.e. standing, sitting, in flexion and extension, as well as in the conventional lie-down position. The FONAR UPRIGHT® MRI often detects patient problems that other MRI scanners cannot because they are lie-down and "weightless-only" scanners. The patient-friendly UPRIGHT® MRI has a near-zero claustrophobic rejection rate by patients. Regarding patient comfort, as one FONAR customer stated, "If the patient is claustrophobic in this scanner, they'll be claustrophobic in my parking lot." Approximately 85% of patients are scanned sitting while watching TV.

FONAR has new works-in-progress technology for visualizing and quantifying the flow of cerebrospinal fluid (CSF) which circulates throughout the brain and vertebral column at the rate of 32 quarts per day. This imaging and quantifying of the dynamics of this vital life-sustaining physiology of the body’s neurologic system has been made possible first by FONAR’s introduction of the MRI and now by this latest works-in-progress method for quantifying CSF flow in all the normal positions of the body, particularly in its upright flow against gravity. Patients with whiplash or other neck injuries as well as patients with childhood autism, Multiple Sclerosis, Alzheimer's disease, Amyotrophic Lateral Scherosis (Lou Gehrig's disease), Parkinson's disease and dementia are among those who FONAR believes are likely to benefit from this new understanding of CSF flow physiology.

FONAR’s substantial list of patents includes recent patents for its technology enabling full weight-bearing MRI imaging of all the gravity sensitive regions of the human anatomy, especially the brain, extremities and spine. FONAR’s UPRIGHT® Multi-Position™ MRI is the only scanner licensed under these patents.

UPRIGHT® and STAND-UP® are registered trademarks and The Inventor of MR Scanning™, Full Range of Motion™, Multi-Position™, Upright Radiology™, The Proof is in the Picture™, True Flow™, pMRI™, Spondylography™, Dynamic™, Spondylometry™, CSP™, and Landscape™, are trademarks of FONAR Corporation.

This release may include forward-looking statements from the company that may or may not materialize. Additional information on factors that could potentially affect the company's financial results may be found in the company's filings with the Securities and Exchange Commission.