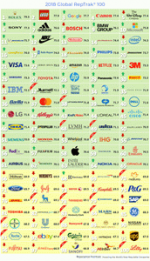 The RT100 is based on more than 230,000 individual ratings collected in the first quarter of 2018. It includes comparative rankings, demographic trends, and unique insights into the dynamics behind reputational impact. The global study shows what drives trust and identifies supportive behaviors such as intent to purchase a company’s products, willingness to invest in, or even work for, the company.

Rankings dropped for 58 percent of companies in the RT100. Aligned with the decline in reputation, garnering support among stakeholders has become more difficult for companies; expectations have risen, making it harder to earn trust, attain benefit of the doubt, create consumer loyalty and entice investors.

“The reputation bubble has burst. Companies are down by an average of 1.4 points globally, representing the first major decline since the end of the Great Recession,” said Stephen Hahn-Griffiths, Executive Partner and Chief Research Officer for Reputation Institute.

About Reputation Institute
Reputation Institute powers the world’s most reputable companies. By tracking and analyzing stakeholder perceptions, we unleash the power of reputation to enable leaders to build better companies. Our RepTrak® model analyzes the reputations of companies and is best known as the Forbes-published Global RepTrak 100. Underlying the model is the RepTrak methodology, the global gold standard for measuring reputation. Learn more at: http://www.reputationinstitute.com.

A photo accompanying this announcement is available at http://www.globenewswire.com/NewsRoom/AttachmentNg/52557402-41fb-45a8-a4da-f48cfcc18a9a

A photo accompanying this announcement is available at http://www.globenewswire.com/NewsRoom/AttachmentNg/d376eb8a-574f-4768-ac17-9c3e0191aa2f