By: Jutia Group
With Nevada gold projects taking center stage in the M&A sphere, one new gold explorer that has grabbed the attention of industry observers is moving quickly to prove up its project. Nevada is no slacker [...]

With Nevada gold projects taking center stage in the M&A sphere, one new gold explorer that has grabbed the attention of industry observers is moving quickly to prove up its project.

Nevada is no slacker when it comes to massive gold mines. Barrick Gold’s Cortez Gold Mine and Goldstrike Mine each produce over 1 million ounces of gold a year, and Newmont Mining’s Carlin Operations aren’t far behind.

Nevada gold acquisitions are rampant this year as well.

In the past year alone, Hecla Mining acquired Klondex Mines for a staggering $426 million, Alio Gold acquired Nevada-based Rye Patch in a deal valued at $128 million and Coeur Mining has just taken over Northern Empire at the cost of $90 million. Good companies with good projects are in demand.

One company with similar geology in the same geography is just getting started. 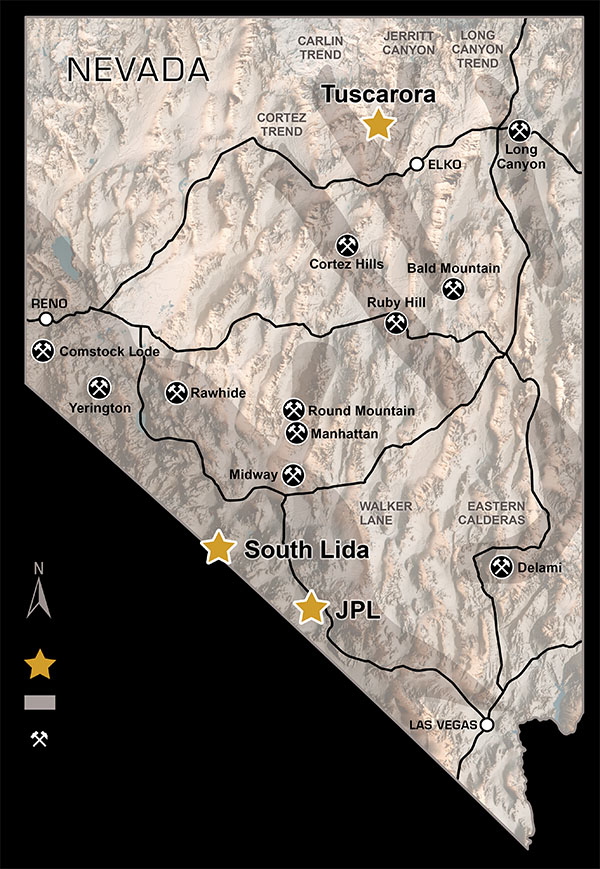 Bob Moriarty of 321 Gold noted in May that “it’s always nice to drill a home run hole with 143.5 g/t gold grade but even better when you can pick up such a project essentially for peanuts after someone else already found the vein system for you. . . We know from past results from both Newcrest and Novo that there are multiple bonanza grade veins at Tuscarora.”

This discovery propelled Novo Resources’ stock price upwards. Over the next three months following the announcement of this discovery, its stock went from CA$0.83 to a peak of CA$8.55, an increase of about 930%. The stock sits at CA$2.67 at the time of writing.

Chen Lin, the force behind the newsletter What is Chen Buying? What is Chen Selling?: “I discussed [the Tuscarora project] with Quinton Hennigh two years ago. He told me it was a project that he had an eye on for 20 years…”

Nick Hodge in Nick’s Notebook: “American Pacific was able to get the project for the bargain price of $375,000 in payments and 800,000 shares over three years.”

“Location and jurisdiction are make-or-break in mining,” Smith explained.

Tuscarora lies between major mining trends and gold projects in Nevada, with a signature quite similar to Klondex’s Fire Creek—a narrow vein of a high grade gold mineralization in the heart of the state.

The company was able to tap Eric Saderholm to be its president. Saderholm at that point was the exploration manager for the Western U.S. at Newmont Mining Corp. (NEM:NASDAQ), the second largest gold mining company in the world with a market cap of over $16 billion.

“Saderholm is known as one of Nevada’s top geological talents and an expert in his field. He joined the team as the company went public, bringing decades of discovery to production experience in both major and minor resource companies with him,” Smith told Streetwise Reports.

The Gecko Investor Group wrote on March 7 of this year that American Pacific is “probably in the world’s best place to do mining right now—Nevada.”

The property has already produced gold, with historical production of 204,000 ounces of gold and 7.5 million ounces of silver.

American Pacific Mining (USGD:CSE; USGDF:OTC) moved quickly and expanded the Tuscarora project. It increased the number of claims from 24 to 91 and the project area from 447 acres to 1,818 acres. “We know we have something special on our hands,” said Smith.

Chen Lin: American Pacific Mining “is one of the juniors to watch this summer.”

These five industry experts think that American Pacific is a good opportunity for those interested in investing in the gold sector.

1) The following companies mentioned in this article are billboard sponsors of Streetwise Reports: American Pacific Mining. Click here for important disclosures about sponsor fees. An affiliate of Streetwise Reports is conducting a digital media marketing campaign for this article on behalf of American Pacific Mining. Please click here for more information.

2) Comments and opinions expressed are those of the specific experts and not of Streetwise Reports or its officers. The information provided above is for informational purposes only and is not a recommendation to buy or sell any security.

4) From time to time, Streetwise Reports LLC and its directors, officers, employees or members of their families, as well as persons interviewed for articles and interviews on the site, may have a long or short position in securities mentioned. Directors, officers, employees or members of their immediate families are prohibited from making purchases and/or sales of those securities in the open market or otherwise from the time of the interview or the decision to write an article, until one week after the publication of the interview or article. As of the date of this article, officers and/or employees of Streetwise Reports LLC (including members of their household) own securities of American Pacific Mining, a company mentioned in this article.

Bob Moriarty: I, or members of my immediate household or family, own shares of the following companies mentioned in this article: American Pacific. American Pacific is an advertiser on 321 Gold.

Gecko Research is almost always invested in the companies we write about and thus one can assume that there is some bias within our investment ideas. Although we see ourselves as long term investors, we might buy and/or sell the stocks we write about at any time. Read full disclaimer here.

WallStreetWindow.com is owned by Timingwallstreet, Inc of which Michael Swanson is President and sole shareholder. Both Swanson and employees and associates of Timingwallstreet, Inc. may have a stock trading
position in securities which are mentioned on any of the websites or commentaries published by TimingWallStreet or any of its services and may sell or close such positions at any moment and without warning. He owns positions in the stocks and funds mentioned in this report.