Vancouver, BC - TheNewswire - July 28, 2020 - Fuse Cobalt Inc. ("the Company" or "Fuse") (TSXV:FUSE) (OTC:FUSEF) (FRA:43W3) is pleased to announce that it has successfully negotiated a reciprocal data sharing agreement with Dajin Lithium Corp.'s (TSXV: DJI) that is to be formalized in an agreement over the next couple days.

Robert Setter, Fuse President & CEO comments "Approaching Dajin about sharing data will allow both of our companies to incorporate the western area of Teels Marsh into the existing basin model. Adding our data set to the existing Dajin exploration model, will save considerable time and money when we look at the development of the lithium brine potential for the Teels Marsh property as a whole. This is a big win for Fuse shareholders as we being to work on our 100 placer claims covering 2000 acres (809 hectares) lithium property in Nevada. As we all know this area has enormous potential given that the property is located approximately 48 miles northwest of Clayton Valley and the Rockwood Lithium Mine, North America's only producing brine-based Lithium mine supporting lithium production since 1967."

The initial work will include a gravity survey at Teels Marsh (see accompanying image of suggested station locations). The goal of this gravity survey is to identify the basin architecture to the southwest of the area covered in the previous Dajin gravity survey and link up the two data sets. 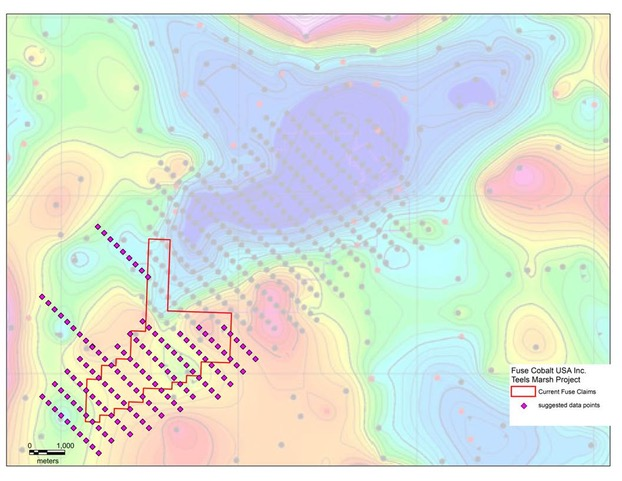 Robert Setter continues "This program west of our claim block would allow us see if there might be a potential buried sub-basin to the west which could be an area of accumulated lithium. The remaining data points to lows in the area that we would like to see how they might be interconnected on the property to advance the project as there are at least two potential sub-basins on the property. Our follow-up work program will include the use of reverse circulation holes to test for lithium bearing clays going down about 200 m which will give a good indication of the lithium content in the clay but also the content of the brine solution. After this work program is completed, we will update and amend an existing draft NI #43-101 on the property for eventual Sedar filing and publication".

Shallow auger holes and drill-holes (<60 m) show that unconsolidated basin fill deposits include clays, clastic rocks silts and sands), evaporate deposits, and volcanic ash. With the exception of clays, these rocks represent potential sources of permeability. Volcanic ash beds could host significant zones of permeability, due to the relative proximity of Teels Marsh to young volcanic centers at Mono Craters (near Mono Lake) and Long Valley, California, both located approximately 70 km to the southwest. These ash layers have proven to be the most productive brine sources in Clayton Valley (an active geothermal area).

The Bishop Tuff, which is believed to represent an important zone of permeability at Clayton Valley, (80 km to the SE of the only North American lithium brine deposit which is being mined by Rockwood Lithium Inc.) is likely present in the subsurface at Teels Marsh.

Direct evidence of an active geothermal system in the Teels Marsh area has recently been gathered by researchers at the Nevada Bureau of Mines and Geology, University of Nevada, Reno and the Desert Research Institute. This evidence comes from mapping anomalously high temperatures at a depth of only 2 meters below the basin surface: these temperatures are as high at 35C compared to background temperatures of approximately 16-18C. The temperature anomalies occur in two separate zones, both of which are adjacent to a Quaternary fault on the western margin of Teels Marsh basin. The two temperature anomalies have a combined strike length parallel to the fault of almost 4 km. A USGS geochemical survey conducted in 1976 reported lithium values as high as 850 ppm from samples taken from springs marginal to these fault structures.

In 2016, Nevada Energy Metals Inc. (TSXV: BFF) collected twenty-seven shallow auger sediment samples from the Teels Marsh West Project area. This initial sampling program was primarily a test of the sampling method to see if it could be used to collect samples beneath low sand dunes and alluvial gravel. Additional samples were collected using a powered auger to reach a maximum depth of 2.9 meters (9.5 ft.) below the surface. The holes were initially drilled with an electric auger and bottom hole samples were collected with a hand tulip style sampler. Sampling was conducted by Pediment Gold LLC of Sparks, Nevada. Samples were collected on site and transported to the ALS Global preparation facility in Elko, Nevada by the Nevada Energy Metals project geologist. Samples were analyzed by ALS using their MEMS41 multi-element package. QA/QC standards and blanks were inserted into the sample stream to assure accuracy.

Lithium values ranged from 8.9 to 104.5 ppm. The two best results (93.2 and 104.5) were obtained downstream of thermal springs on the western part of the property. A general increase in values was noted at the playa margin with lower values in the alluvial fan on the southwestern part of the property. Many of the sites on the alluvial fan did not penetrate to the maximum depth due to boulders. Sampling was supervised by Alan J. Morris CPG who serves as the project geologist and Qualified Person on the Teels Marsh West Project.

The Teels Marsh West project is adjacent to the Dajin Lithium Corp.'s (TSXV: DJI) project and comprises a land position of 3,202 hectares and 403 Placer claims. In 2018, Dajin began to move forward with construction of the engineered roads and drill pads at Teels Marsh valley in preparation for the drilling of four (4) production sized exploration wells. This area is getting a lot of attention as EV battery production builds up in Nevada and globally.

The technical content of this news release has been reviewed and approved Alan J Morris, CPG, the project geologist and Qualified Person on the Teels Marsh West Project

Fuse Cobalt Inc. is a Canadian based exploration company that trades under the symbol FUSE on the TSX Venture Exchange. The Company's focus is on exploration for high value metals required for the manufacturing of batteries.

Ontario Cobalt Properties: Fuse owns a 100% interest its Glencore Bucke Property, situated in Bucke Township, 6 km east-northeast of Cobalt, Ontario, subject to a back-in provision, production royalty and off-take agreement. The Glencore Bucke Property consists of 16.2 hectares and sits along the west boundary of Fuse's Teledyne Cobalt Project. The Company also owns a 100% interest, subject to a royalty, in the Teledyne Project which consists of 785 hectares of land and is also located near Cobalt, Ontario. The Teledyne Property adjoins the south and west boundaries of claims that hosted the Agaunico Mine, a former producer of both silver and cobalt.

Nevada Lithium Property: Fuse owns a 100% interest in 100 placer claims covering 2000 acres (809 hectares) at Teels Marsh, Nevada. The property, called Teels Marsh West is highly prospective for Lithium brines and is located approximately 48 miles northwest of Clayton Valley and the Rockwood Lithium Mine, North America's only producing brine-based Lithium mine supporting lithium production since 1967. Access to Teels Marsh is via dirt road, west of Highway 95 and northwest of Highway 360.

On Behalf of the Board of Directors