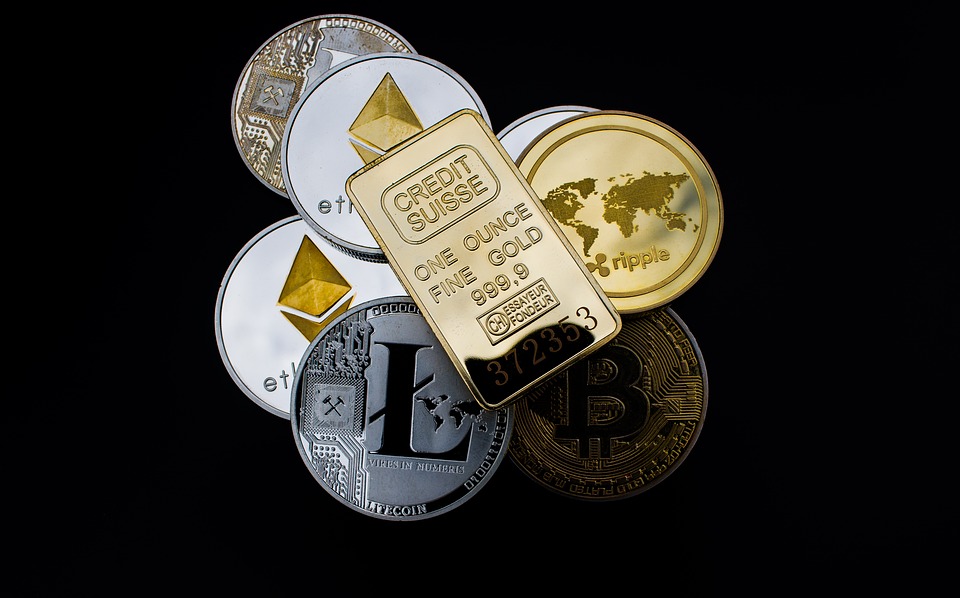 The cryptocurrency market has been trading in a volatile fashion over the weekend. Bitcoin price moved above $12k for the first time in a year, while Ethereum hit the highest levels since August 2018.

Bitcoin (BTC) price managed to gain over 4% yesterday to close above $11,800. Buoyed by a strong daily close, the buyers accelerated the rally by pushing the price action north of $12,000, before the world’s largest digital coin retreated in a spectacular fashion.

Bitcoin price dropped from $12,100 to below $10,600 in 15 minutes overnight. Given that the zone around $11,500 is the former resistance – now support – the late BTC buyers used this opportunity to get on the long side. The price action then quickly returned to above $11,000. 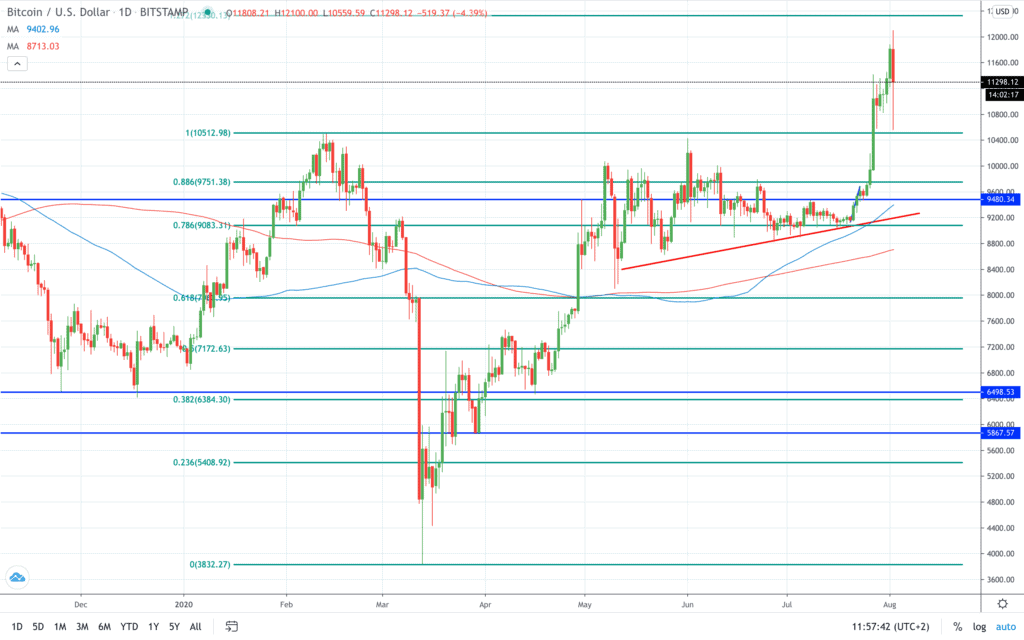 There seems to be no clear reason explaining why $1 billion worth of BTC was liquidated in such a short time. One potential justification may be that some of the bigger players used a trip above $12,000 to collect their profits.

Alternatively, this move happened over the weekend when the liquidity is thin, hence explosive moves are more likely to happen in these market conditions.

Looking forward, the bulls fell short of tagging the 161.8% Fibonacci extension line above $12,300. This has been the buyers’ target after clearing the $10,500 resistance, which will now act as a strong support line.

It’s been no secret that Ethereum (ETH) price has looked stronger than Bitcoin lately. Given that these two digital assets are closely correlated, Ethereum bulls managed to do what their BTC counterparts failed to accomplish.

One of the potential reasons for this is that retail investors are exchanging Bitcoins to Ethereums. The supply of tokenized bitcoin (BTC) grew more than 70% in July. Hence, nearly $100 million worth of Bitcoins moved to Ethereum in July. 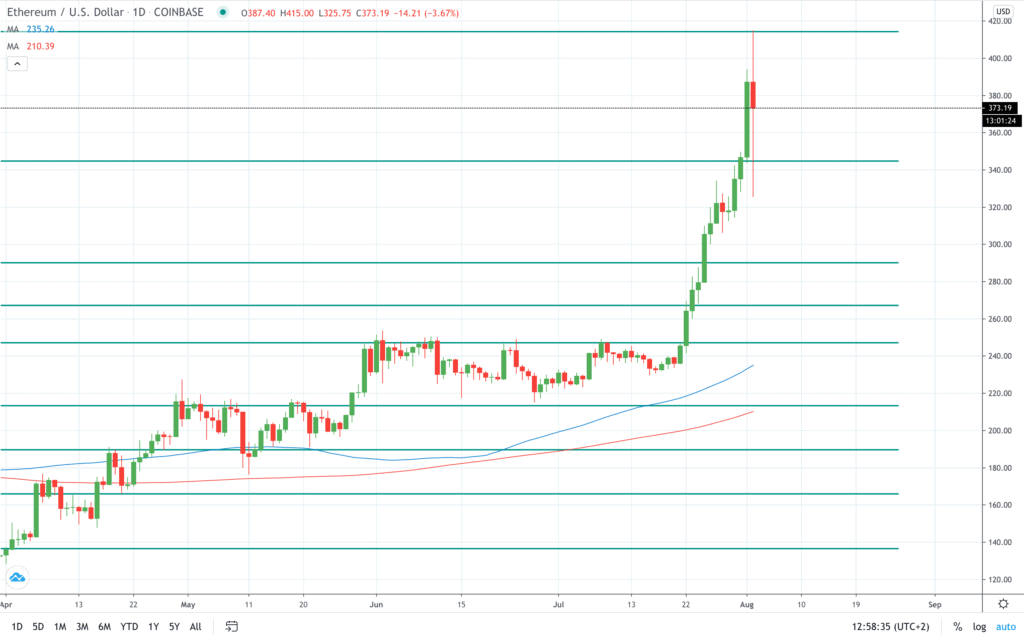 On its way higher, ETH bulls tagged the 161.8% Fibonacci extension line near $415. This signals that Ethereum is in a better form than the world’s largest digital coin by market value. The higher high also meant that Ethereum’s retreat was also of a milder nature.

Similarly, the Ethereum buyers used this retreat to $325 to buy ETH and push it higher again. The zone around $400 is also home to a strong confluence of horizontal resistance levels. Therefore, we can expect this area to be a tough nut to crack.

XRP fighting its own battle

Ripple (XRP) price has also exploded to follow Bitcoin and Ethereum higher. The bulls pushed the price action to $0.3250, which is a new 5-month high for Ripple. More importantly, the price action tagged the 100-period weekly moving average for the first time in a year. 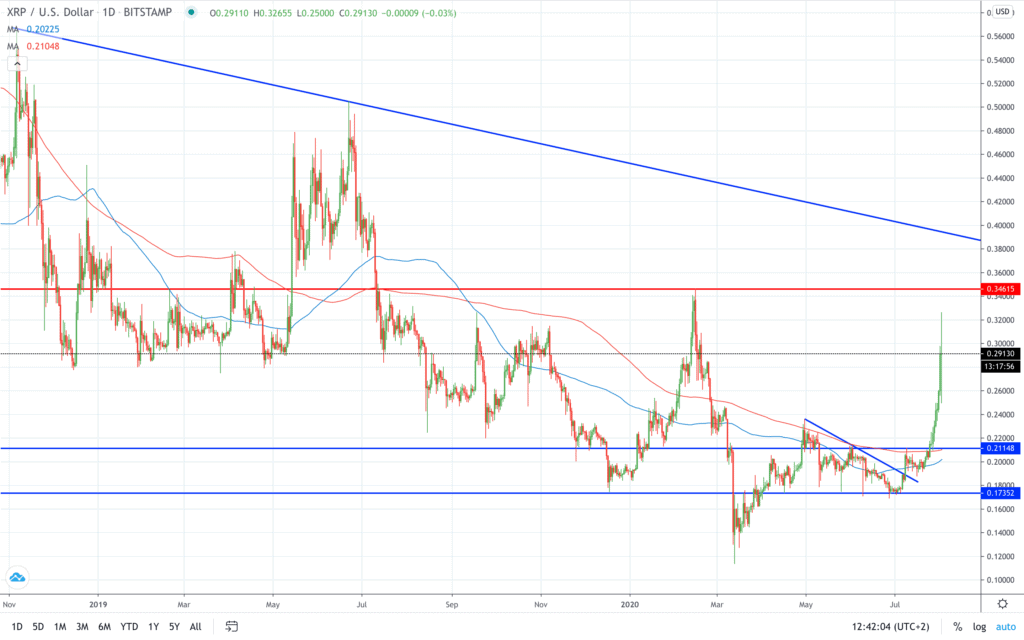 A close above this technical indicator could attract more buying interest in XRP. In this case, the bulls are likely to target a move to $0.3450 where 2020 highs are located. A long-term target for the buyers is the 2-year descending trend line that falls just below the $0.40 mark.

Bitcoin SV (BSV) price moved to print levels above $250, which is the highest price action recorded since February this year. The zone around $250 hosts two important resistance levels – the horizontal resistance and the 127.2% Fibonacci extension line. 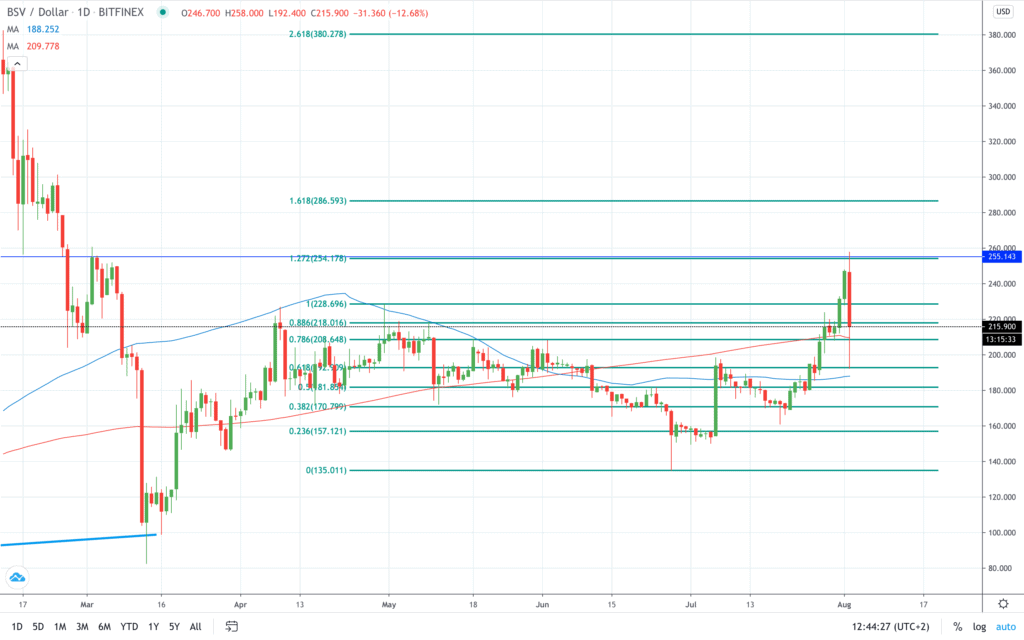 However, It looks like BSV is also the most exposed to a pullback as it currently trades over 10% lower on the day. If the bulls fail to close above the horizontal resistance/support line at $227, we may see a deeper pullback next week.

Chainlink (LINK) price resembles a classic “buy the dip” scenario. A key characteristic of strong uptrends is that investors are using every dip as an opportunity to get on the long side. After it gained more than 6.5% yesterday, the LINK investors have continued to push the price action higher to bring it closer to the record highs set last month. 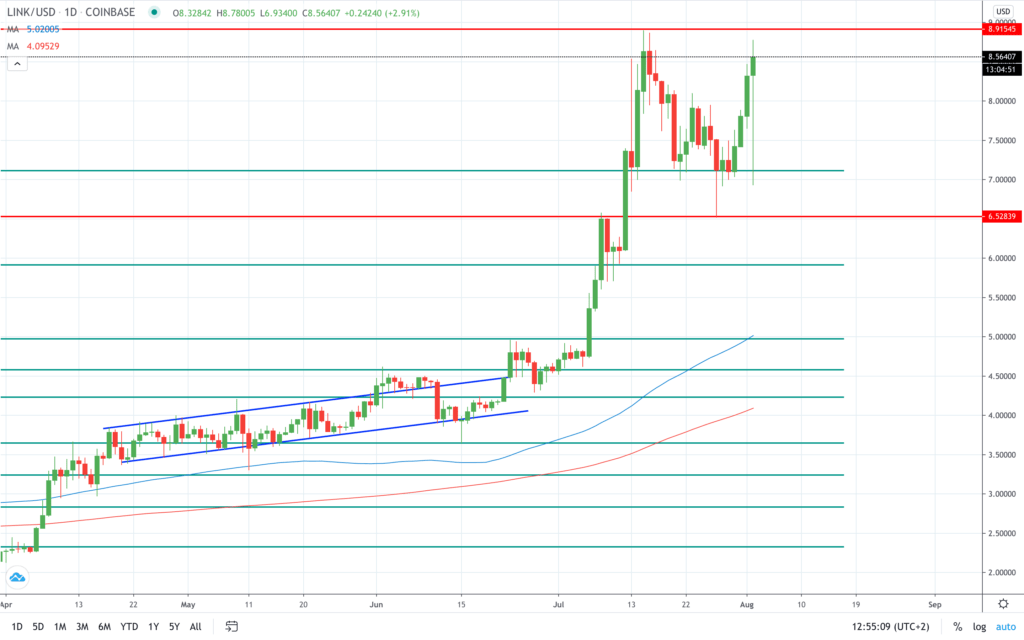