By: Penny Stocks to Buy, Picks, News and Information | PennyStocks.com - Feed
Are These Penny Stocks On Your Watch List Right Now?

We’re heading into the end of the week and, of course, penny stocks are in focus. It seems like August just started but next week is that last, full-week of the month. We are approaching, what is known as “Back To School Season” but things are a bit different this year. Due to the pandemic, many students aren’t going back to a building. They’re going back to a desk, a table, or the couch to learn at home.

But the fact of the matter is that regardless of what’s happening in the economy, the stock market metrics appear to be in line with historic trends. Case in point is that we’re in the final days of the summer and trading volumes are noticeably lower from earlier in the year.

[Read More] Are These Top Penny Stocks To Buy Now Or Avoid Like The Plague?

This is typically the case during the late summer months. But let’s break down some specifics. During the period from August 1 to August 20, the S&P SPY ETF traded more than 1.58 billion shares. This year, during the same period, that market ETF has traded 680 million shares. Now, you may be saying that August last year began on the 1st, this year it began on the 3rd. However, the same number of trading days were recorded for both years. So what does this mean for traders?

Well, it can mean a lot of things to a lot of people. But for mean, the lower liquidity just means that there needs to be a higher level of discretion when it comes to picking and choosing the stocks you’d like to trade. Lack of liquidity can present its own set of risks at the end of the day. Is it a stock picker’s market? That’s up to you to decide but in the meantime, here’s a list of penny stocks gaining attention at the end of the week.

The story surrounding Remark Holdings Inc. (MARK Stock Report) began much earlier during the pandemic. It wasn’t one of the coronavirus vaccine stocks. But it was one of the companies benefiting from plans to reopen after the pandemic began subsiding (whenever that would be). Fast-forward a few months and not only has the company reported a few key updates, but the stock has also reflected the market’s sentiment.

Ever since April 28 when the company gained media attention for its thermal imaging, MARK stock has been on the move. We’ve watched it rally as high as $3.56 and after pulling back, it seems that the company started gaining attention at the end of this week. Much of the company’s progress and source of speculation have stemmed from images and updates on Remark’s Twitter feed. While there haven’t been many formal updates, the company recently announced a deal to install its AI-powered Bio-Safety Thermal Kits to Zero Bond. It’s a members-only urban lodge and social workplace in New York City.

Remark stock was recently the center of huge speculation; both negative and positive. Obviously, by the look of the chart, the negative speculation has ruled the marketplace over the last few months. However a recent update on Thursday seems to have re-sparked some interest in Remark. On Thursday, the company not only corrected misinformation floating in the bloggosphere, it also reported that Remark withdrew its plan to raise funds through the sale of securities. This ended up triggering a bullish tone in the market but can that continue or is this another flash in the pan for MARK stock? 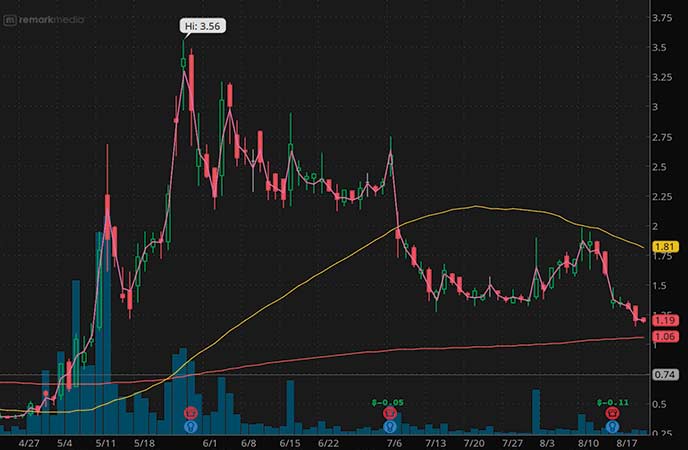 Another one of the pandemic penny stocks to watch this year was iFresh Inc. (IFMK Stock Report). The penny stock ran up huge in the first quarter but since then, the overall trend has been a downward one. That’s in spite of the fact that since the start of this week, IFMK stock has jumped over 20%. Don’t get me wrong, there’ve been several periods of IFMK breaking out. But the general trend from April to the present isn’t heading higher. Will that change after the company’s latest updates? You decide.

This week iFresh reported quarterly results. Its earnings came in at $0.15 per share. This is a 178.95% increase over losses of $(0.19) per share from the same period last year. The company also recorded $21.27 million in sales this quarter. This was a 7.87% decrease over sales of $23.08 million the same period last year. There was only the company filing to go off of and no formal press release so far.

Other key points from the results included an increase in gross profit from $4,798,495 to $6,043,658 year over year. Contributing to the EPS growth, iFresh reported a net income for the quarter of $3,603,388 compared to a net loss of $3,368,126 compared to last year’s same quarter. Considering these results amid a pandemic, it looks like the news has been received favorably in the stock market today. Can this trend continue during the remainder of the month? 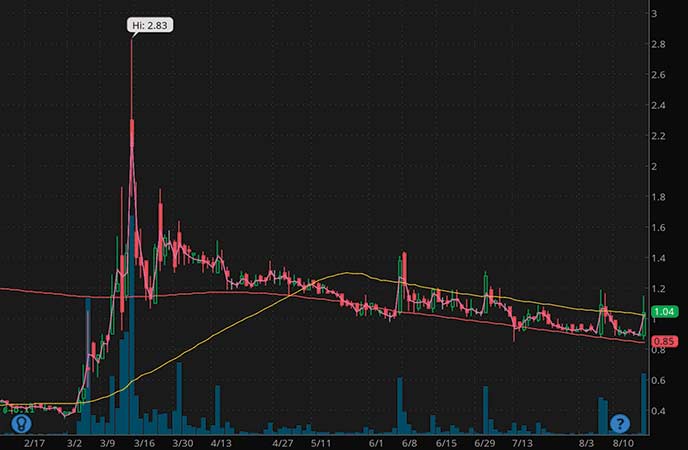 AutoWeb Inc. (AUTO Stock Chart) was on our list of penny stocks to watch this week. In fact, since the start of August, AUTO stock has climbed from around $2 to nearly $3.70 this week; 77%. The main point of focus was the company’s financial results.It reported select preliminary unaudited results for July 2020. Results show lower July revenues in 2020 compared to 2019. However, gross profit and gross margin were both noticeably higher as well as the posted net loss and adjusted EBITDA.

On top of this, Thursday saw analysts jump on the coattails of this recent bullishness. B. Riley upgraded the company’s stock to “Buy” from “Neutral”. It also raised its price target from $1.15 to $4. Analysts at Lake Street also upgraded AUTO. The firm went from “Hold” to “Buy” and raised its target from $2 to $5.

Jared Rowe, President and CEO of AutoWeb. “Our improved results over the past several months are further evidence of the strength of our turnaround. Gross margin has continued to hold above 35%, and we generated positive cash flow and adjusted EBITDA in both June and July. In fact, we drove a higher level of adjusted EBITDA in July than we did for the entire second quarter.”

But after such a huge day on Thursday, can AUTO stock really move higher before next week? 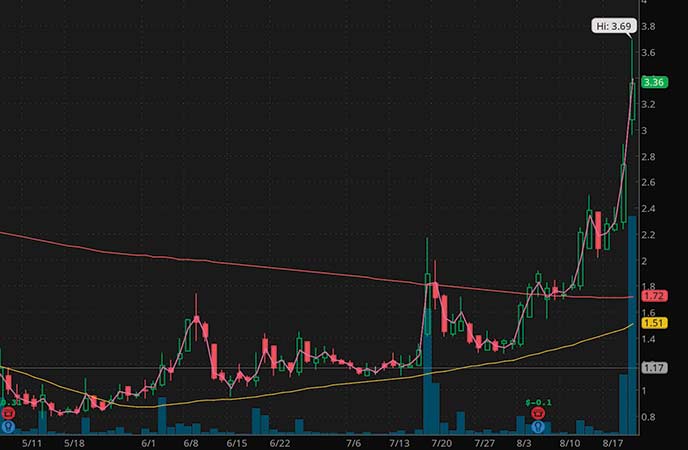 In March, the FDA accepted Zosano’s new drug application for the treatment and has set a Prescription Drug User Fee Act goal date of Oct. 20. In the meantime, the company signed a deal with Eversana to commercialize and distribute Qtrypta if it’s approved by the FDA. If approved, the company said Qtrypta would be the first and only microneedle patch indicated for the acute treatment of migraine. But that’s not all Zosano has targeted the microneedle patch technology for.

The patch was also in focus as a potential use in COVID-19. Zosano wrote on its website that “Zosano is eager to rise to the challenge of responding to the COVID crisis by collaborating with vaccine developers to provide the first microneedle vaccine for at home application.”

[Read More] Are These Penny Stocks To Buy After Recent Insider Actions?

This week attention continued to focus on ZSAN stock. This came after the company announced that it entered into a feasibility study agreement with Mitsubishi Tanabe Pharma Corporation. Zosano will evaluate the feasibility of formulating a pharmaceutical agent being developed by Mitsubishi for administration in humans, with its proprietary microneedle patch system.

ZSAN stock has been on fire in August. Since last Friday, shares have climbed as much as 44% so far. Will the trend continue? 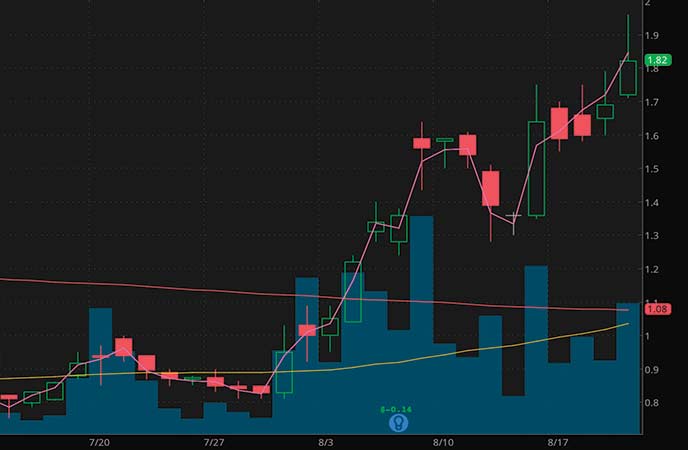