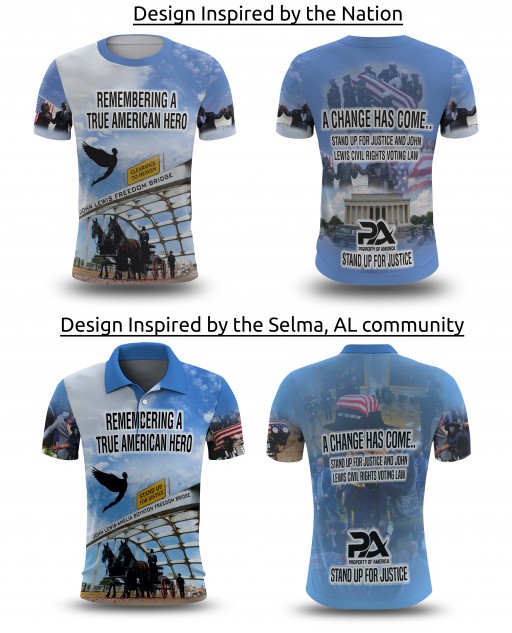 As part of a major national “Stand Up for Justice” initiative to support the Selma community, entrepreneur Dexter Morrison has released a new line of T-shirts and other merchandise to support the renaming of the famed Edmund Pettus Bridge to the John Lewis Freedom Bridge.

A portion of the proceeds from the sales will be shared with groups in Selma leading the campaign and fighting for social justice.

Morrison’s company, Property of America, has released a line of creative, colorful and eye-catching designs, paying tribute to the late Congressman John Lewis (D-Ga.) who recently died. Lewis led the historic, 1965 “Bloody Sunday” March on Selma where he and thousands of protesters were faced with a wall of law enforcement who beat up and arrested the peaceful group.

As part of the company’s business model, Property of America shares its profits with community organizations in Selma, Ala.

“We, as Black and Brown adults, must all come together to put a plan together that will protect them and bring hopes and dreams back into their lives,” Morrison said. “A change has come to America, and we want a seat at the table, on improving our communities and our children’s lives.”

Morrison is urging people to support this petition is an act to cement a REAL change in America.

Added Morrison, “I also want to inspire all Black and Brown kids with our V.P. Kamala Harris, ‘Ladies First’ design. I feel both of these designs are powerful and have global significance!”