Should you buy penny stocks? If you’re brand new to trading I highly suggest you ask yourself this question before dipping a toe in these volatile waters. The fact of the matter is armed with a few hundred bucks and a trading account, anyone can buy penny stocks.

But we’re not here to just buy, we’re here to sell and, most importantly, make money with stocks. Taking the time to learn how to trade and learn how to find the best penny stocks to buy is just as important as profit from your trades. The long and short of it is that these stocks move VERY quickly. Then, when you’re talking about low float penny stocks, you’re dealing with even more volatility.

This leads me to my next point. The stock market has seen a massive surge in the number of new traders looking to make money with stocks. The crazy part is that few have taken time to actually learn the skills necessary to do so both successfully and consistently. I’ll be the first to say, gurus online might make it look easy.

However, for the most part, they’ve been doing this longer than you have. They didn’t pick up overnight and become a successful trader. It took time and education and this is something that has been overlooked especially when it comes to penny stocks on Robinhood and other platforms. So, if you’re new, please do yourself a favor and get a bit of education before jumping headfirst into small cap stocks.

This is where the strategy begins. Are you looking to invest in penny stocks or are you looking at trading penny stocks? Each has its pros and cons and both require a plan. Obviously, if you’re an investor, you’re looking to make a gain in a longer timeframe, years, and decades in some cases. The likelihood of penny stocks hitting it big enough to become sound investments isn’t usually the modus operandi of the average person buying penny stocks.

For the millions of new traders on Robinhood, penny stocks are an obvious choice. Quick returns in lieu of smaller outlays of cash. It reads well on paper, but keep in mind what I said above. Have a strategy and a clear understanding of each stock in front of you. If we’ve learned anything, it’s that high volatility can create perfect scenarios for big wins and big losses quickly. With this in mind, are these Robinhood penny stocks on your list right now?

Gevo Inc. (NASDAQ: GEVO) has been on our list of penny stocks to watch for weeks now. The company is playing a big point of focus in the alternative fuels sector that has gained so much attention recently. We also introduced it this week as one of the “ESG stocks” to watch right now. If you’re not familiar with the term and are wondering what ESG stock are, I’ll briefly explain. ESG stands for “Environmental, Social, and Governance.” The basic idea behind it is in support of companies that leave a positive impact on those key areas of interest.

Gevo’s entire model focuses on reducing greenhouse gas emissions with sustainable alternatives. The company uses low-carbon renewable resource-based carbohydrates as raw materials. While the company has made many strides to take advantage of this trend. The most recent attention on a global scale has GEVO stock on the radar of many traders especially this week. Why? This Thursday, CEO, Dr. Patrick Gruber participates in the Water Tower Research Fireside Chat series to talk about Gevo’s growth plans.

If this is on your list of penny stocks to watch, keep that in mind. He presents tomorrow during the lunch hour. As GEVO stock managing to climb strongly over the last few days, it’s important to note any potential catalysts that could be in or out of play. 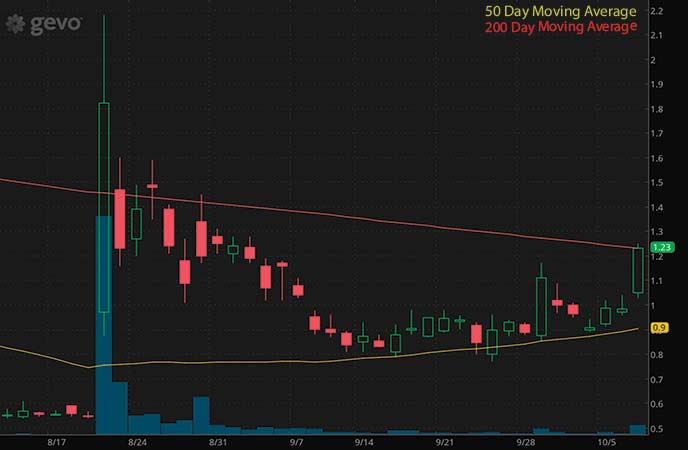 Enservco Corp. (NYSEAMERICAN: ENSV) is another one of the penny stocks we’ve discussed off and on throughout the year. The company provides oilfield services, including hot oiling, acidizing, frac water heating and related services. Monday the company grabbed early attention after inking its latest deal. It wasn’t to expand operations, per se, however, it did reposition it financially.

The literal ebb and flow of oil and gas penny stocks has contributed to a very volatile trading marketplace. But that doesn’t mean ENSV stock hasn’t been a bad stock to watch. In face, between March and October, there’ve been plenty of sporadic breakouts that the penny stock has experienced. The most recent came just a few days ago.

The company closed its refinancing agreement with East West Bank. According to the company, the refinancing “significantly strengthens Enservco’s balance sheet by cutting its bank debt nearly in half and increasing shareholders’ equity by approximately $17.5 million.”

This triggered a strong build-up in momentum that was further compounded by sector sympathy. What’s more, is after consolidating from what appears to have been profit-taking, ENSV stock has managed to find itself in a multi-day uptrend over the last few sessions. This week, in light of the refinancing, the company made several promotions to its leadership team. Will this momentum continue into the rest of the week? 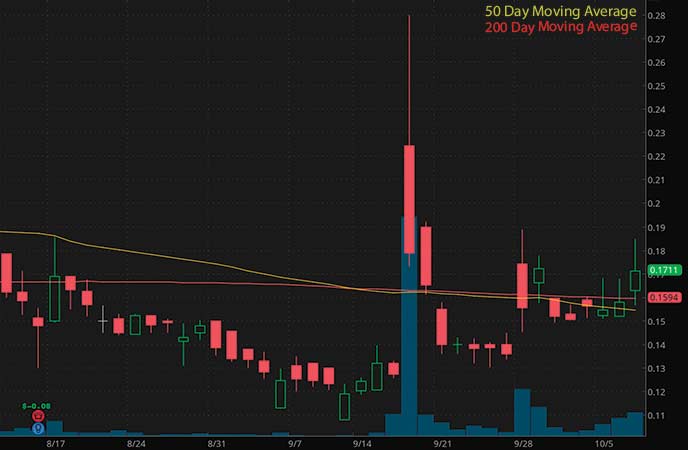 ION Geophysical Corporation (NYSE: IO) is similar to DARE in that volume hasn’t really been present in the stock. It’s very thinly traded and, for the most part, hasn’t managed to put up much of a fight to sellers this year. In fact, if you look at IO stock at the start of 2020, you’ll clearly see that the world of penny stocks is new territory. In any case, the company focuses on data-driven analytics to offshore energy , ports, and defense industries.

The most recent focus for traders this week is what happened on Wednesday. If IO stock is just hitting your screen and you’re not seeing any news catalysts, that’s ok. There weren’t any headlines as of Wednesday’s regular session. However, information surfaced from the European Patent Office late in the date.

It appears that ION Geophysical’s name was on a European Patent Specification letter. The title was, “METHOD AND APPARATUS FOR ANALYZING DATA IN TIME-LAPSE GEOPHYSICAL SURVEYS*,” and triggered a surge in shares of IO stock before the closing bell. We’ll have to see if the company makes comment to this later on. 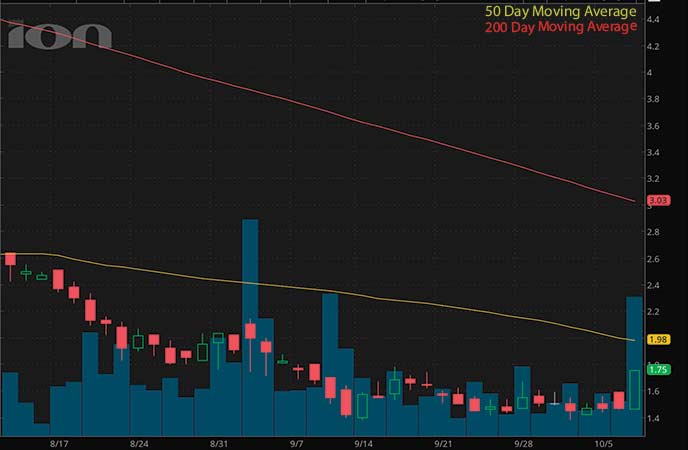