By: Stockmarket.com
Could Airline Stocks Brace Through The Storm?

Airline stocks started off Wednesday on a positive note. This came after President Trump signaled support for industry aid just hours after calling off talks for a new coronavirus relief package. Of course, airline stocks responded by initially rising during the day but somehow did not keep up during the rest of the tradition session. We all know that airlines are among the biggest casualties during the coronavirus pandemic. The reason many airlines are still staying afloat has got to do with both government and private funding. Essentially, obtaining funds during this trying time provides the liquidity airlines need to ride out the turbulence.

After the stock market crash in March, many retailers sensed an opportunity to pick up top airline stocks on the cheap. For those who did, congratulations. You have been a great trader, handily outperforming many veterans. Even the Oracle of Omaha sold his airline stocks at a loss. We can look at the US Global Jets ETF (JETS Stock Report) to get an overall sense of the airline industry. The problem here is, the plot has thickened with much of those gains in June being erased. With the US Global Jets ETF still down 45% year-to-date, investors are still anticipating a strong rebound in the short-medium term. Now that most of the best airline stocks to watch are trading near the March levels again, would you be tempted to buy at such a valuation again?

To combat the novel coronavirus, most top airlines have been announcing new safety and cleaning protocols to try to make consumers comfortable with their travels. For instance, airlines like United Airlines Holdings has teamed up with Clorox (CLX Stock Report) to ensure safer travels among passengers. More recently, the antibody cocktail by Regeneron (REGN Stock Report) appears to be working well for President Trump. Perhaps it is a validation that it could be a potential cure for the virus. But don’t hold your breath just yet. After all, the fact that the drug works on one person is no guarantee that it will work on others. But let’s put that aside. The possibility of a viable cure coupled with the stimulus is sending some of the airline stocks flying again. With all that being said, do you think buying airline stocks now is worth the risk?

Like most airline stocks, shares of American Airlines Holdings (AAL Stock Report) jumped 4.31% after Trump’s announcement of a stimulus aid. A potential injection of $25 billion in federal funds to airlines would serve as a boost to American Airlines. While that would not fully compensate for Tuesday’s dip, it would put AAL stocks at the higher range this month. But perhaps you are trading AAL stock with the hope for a strong rebound in the short-term. If so, I would suggest looking at the third fiscal report to see how the company is managing its balance sheet. But maybe that’s just me. I prefer to exercise caution with these epicenter stocks before diving in. 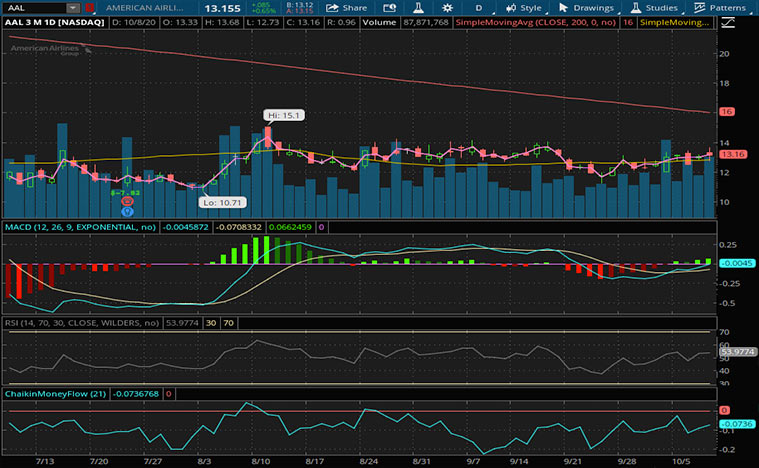 Analysts are expecting American Airlines to lose $2.5 billion during the third quarter. That’s the largest loss of any company in the S&P 500. And it’s even more than the $2.1 billion the company lost in the second quarter. From its latest quarterly report, the airline reported a $2.7 billion pre-tax loss.

Some analysts may say that serious investors might be better off buying AAL stock when it is trading at single digits. While it may be one of the top airline stocks to buy in the U.S., its debt levels are what concerns investors the most. Which makes it a more risky play compared to other airlines. But the question is, do greater risks translate to greater reward in this case?

According to analysts from JP Morgan, United Airlines (UAL Stock Report) is one of the best airline stocks to buy now. That is despite recent volatility in the airline industry. You see, analysts have high confidence UAL can endure the current downturn with sufficient liquidity and sees huge potential upside from current valuation. After the positive analyst coverage and Trump’s stimulus aid, UAL stocks closed 4.3% higher on Wednesday. 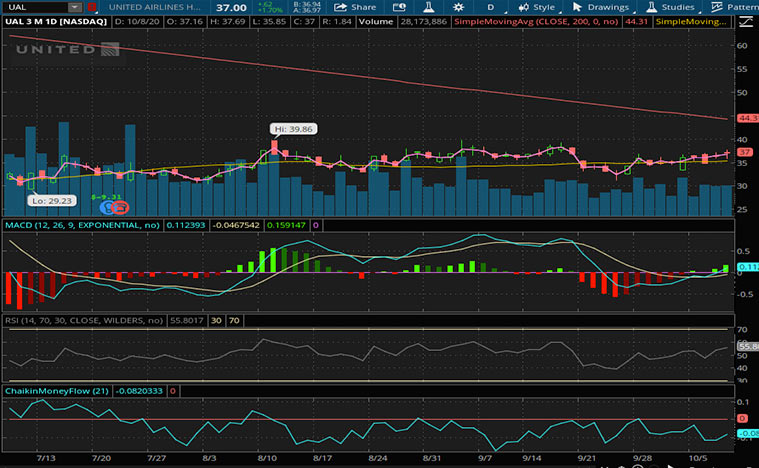 Truth be told, if there’s a rally in the airline industry, UAL stock is expected to go higher. In fact, UAL stock may be the best airline stocks to watch when there’s a rally. This is considering their stronger balance sheet compared to American Airlines. Sure, any developments that could speed up the introduction of vaccines would also drive the restart of airline businesses. New treatments for the virus could also boost demand for flights. However, investors shouldn’t get overly excited about any headlines concerning progress toward a vaccine or treatment for COVID-19. After all, promising developments don’t always lead to cures.

This is true even if the candidate is in its final phase of clinical trials. Of course, it makes sense for investors to celebrate the good news on the medical front. But without an approved vaccine or treatment available in the market yet, recovery is still a tall order. While JP Morgan has upgraded the price target for UAL from $44 to $52, just how long does it take to achieve that 40% upside? Your guess is as good as mine. After all, we are making a guess based on how quickly domestic and international flights return to their normal loads. And that in turn depends on the severity of the pandemic. Is UAL stock the best bet among its industry peers?

JetBlue Airways (JBLU Stock Report) led the sector higher on Wednesday. The shares rose by as much as 8% before closing 6.78% higher. This came after the airline received a double upgrade from “underweight” to “overweight” on the company’s strong cost controls and low valuation. 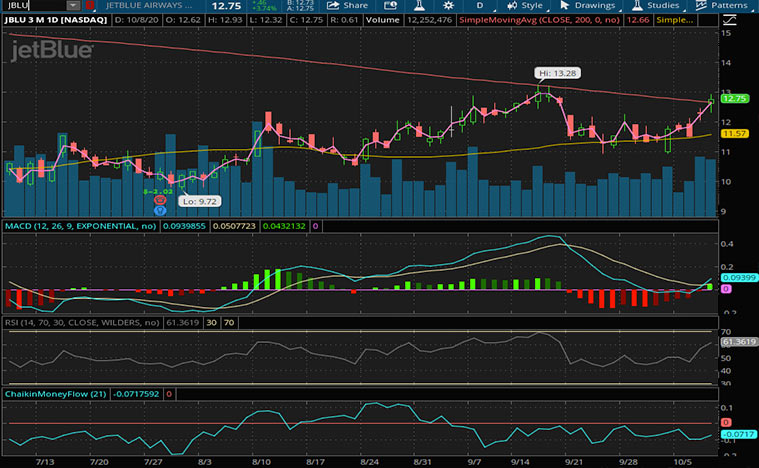 “We do not believe demand trends are recovering at the pace envisioned by management,” …That could result in airline companies reducing their cash burn even further as earnings season gets underway next week- JP Morgan.

JetBlue has been known for its high load factor. That has been crucial to the airline’s success thus far. If you are unfamiliar with the term, it is simply a measure of capacity utilization. A higher load factor means that an airline is able to collect higher revenue for the same fixed cost. Therefore, it is no surprise that higher load factor translates to higher profit. JetBlue, with its focus on discounted flights, achieved an average load factor of 83.9% between 2003 and 2019. That is much higher than the average load factor of 72.6% across US airlines. If you believe that travellers will be jumping back in when the pandemic appears under control, would investing in JBLU stock be an astute move?