5 Hot Penny Stocks To Watch Ahead Of A Stimulus Decision

Monday’s trading activity kicked things off with several hot penny stocks trading higher. There wasn’t a main sector in focus, however, market sentiment remained high ahead of the 48-hour deadline for the stimulus set over the weekend. Nancy Pelosi and Treasury Secretary Steven Mnuchin are set to speak later Monday afternoon to try and hash out a plan. What the outcome will be is obviously yet to be seen.

But one thing we can see is that traders have become cautious even with the markets opening higher. The obvious reason for this has a lot to do with the previous history surrounding this second round of stimulus. It’s gone from “we’re close to a deal” to “we are very far apart” and back again. In addition, we’ve also got news out of China to consider. Upbeat economic data had investors looking at global growth once again. In light of the recent decline across the world due to the coronavirus, China has become a standout for GDP expansion.

If you look at some of the hot sectors right now, tech, industrials, and biotech penny stocks are among the top to focus on. When you consider certain penny stocks to buy, sector momentum can become a huge driver. However, with such a broad array of hot industries right now, it could get a bit distracting. Let’s take a look at a few of the hot penny stocks today that’ve climbed higher during Monday’s morning session.

While AMC Entertainment Holdings (AMC Stock Report) has been on and off our lists of penny stocks, shares have recently picked up steam during the past few days. We discussed AMC stock late last week as optimism grew around the company’s latest hedge against remaining completely shut down. The company said it would begin renting out individual theaters to customers in a move to generate some sort of revenue from its locations.

This week, the company doubled-down on positive updates. AMC announced that several AMC locations throughout New York state will resume operations beginning this Friday. The reopenings are a result of the recent announcement by New York Governor Andrew Cuomo, allowing movie theaters throughout some of the state to reopen. Roughly 12 locations are expected to reopen mainly in upstate New York and Long Island.

On the heels of this latest development, the market has gained momentum. The company expects to have around 530 of its 600 theater circuit open and serving guests by the end of the month. 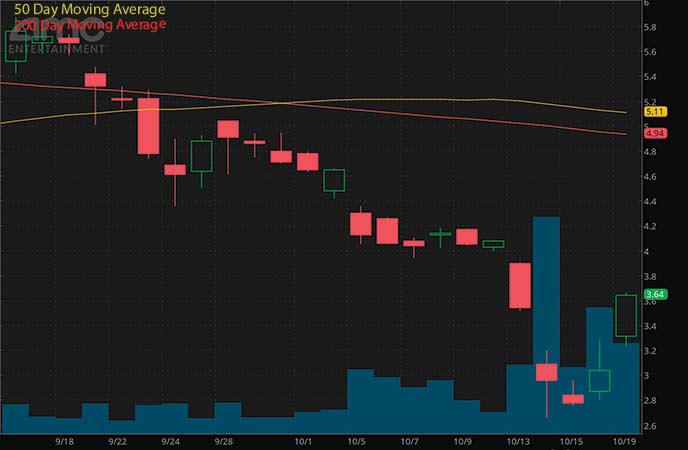 Another one of the penny stocks we’ve discussed recently is Nokia (NOK Stock Report). In so many words, Nokia is going to the moon, quite literally. Information began surfacing via reports and on Twitter, regarding this intergalactic move for the company. On Monday, the company put out a formal press release detailing its latest deal with NASA.

Nokia Bell Labs’ pioneering innovations will be used to build and deploy the first ultra-compact, low-power, space-hardened, end-to-end LTE solution on the lunar surface in late 2022. Marcus Weldon, Chief Technology Officer at Nokia and Nokia Bell Labs President, said, “Leveraging our rich and successful history in space technologies, from pioneering satellite communication to discovering the cosmic microwave background radiation produced by the Big Bang, we are now building the first-ever cellular communications network on the Moon.”

[Read More] What Are The Best Penny Stocks On Robinhood To Buy Right Now? 4 To Watch

The deal, worth around $14 million, is the first of its kind with a telecomm company putting such a thing on the lunar surface. NOK stock has responded favorably on Monday, reaching early highs of $4.19. The next thing to consider with this hot penny stock is whether or not it can maintain itself at these new, higher levels. 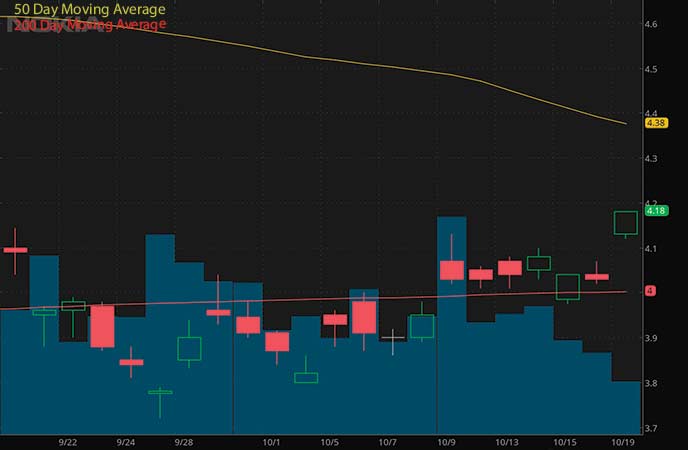 We discussed Emerson Radio Corp. (MSN Stock Report) at the start of the week last week. At the time, MSN stock was trading around $0.70. Since then, we’ve seen, first-hand, a rally to highs of $1.35 on Friday with surging volume to back it up. That momentum continues on Monday in what has become a week-long 90%+ move.

Companies like Emerson have received some attention recently as stimulus talks continue. You’ve likely seen the logo on plenty of electronics and appliances. One of the things to consider is this push for stimulus, on a basic level, means money in consumers’ pockets. Emerson’s customers include Kroger, Wal-Mart, Amazon.com, and Fred Meyer to name a few.

In any case, MSN stock has spiked once again on Monday. A big focus for traders will likely be the outcome of today’s 3 PM meeting between Pelosi and Mnuchin. 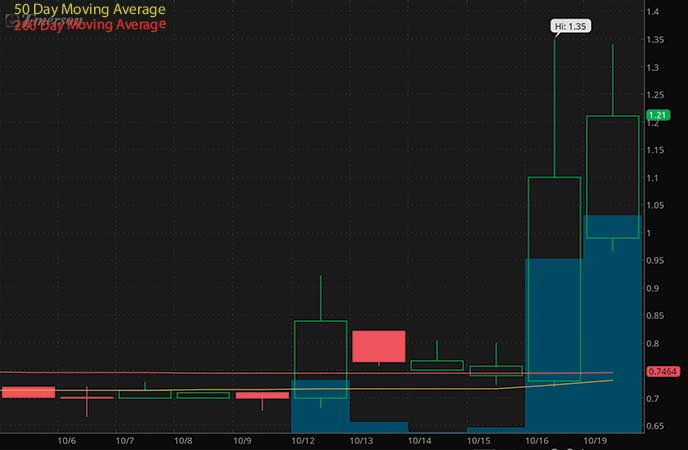 OPKO Health Inc. (OPK Stock Report) maintained its recent uptrend on Monday. Since the beginning of this year’s second quarter, the biotech company’s stock has been in a strong uptrend. After reaching highs of $6.47, OPK stock took a breather and consolidated a but in August, followed by yet another rally this month. As discussed over the weekend, OPK could be seeing some speculative momentum heading into its next earnings release. in 10 days OPKO releases its second quarter financial results.

One of the things the company’s been working on includes a COVID-19 testing program for New York City Schools. In a press release earlier this month the company said it would begin collecting specimens from over 950 schools. What’s more is that OPKO has also continued its work on other pipeline treatments including one with biotech heavyweight, Pfizer.

The company released results of a recent Phase 3, randomized, multicenter, open-label, crossover study. It evaluated somatrogon dosed once-weekly in children 3 to 18 years of age with growth hormone deficiency (GHD). The trial met its primary endpoint of improved treatment burden compared to GENOTROPIN® (somatropin) for injection administered once-daily. In 2014, Pfizer and OPKO entered into a worldwide agreement for the development and commercialization of somatrogon for the treatment of GHD. 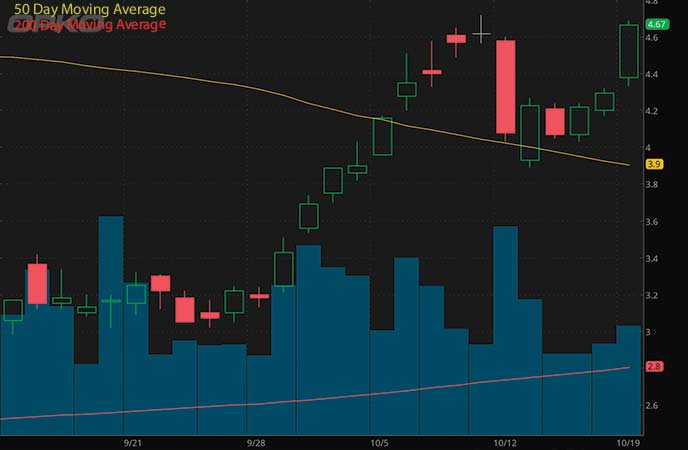 Senmiao Technology Limited (AIHS Stock Report) has been one of the hot penny stocks to watch since late September. Earlier this year, the company announced a strategic cooperation agreement with Sichuan Hongyu Enterprise Management Co., Ltd. It was to facilitate the purchase of electric vehicles and cross-promote their brands, products, and services for a term of three years. The goal is to further expand its automobile transaction and related services business.

Aside from that, however, there haven’t been many further updates from the company recently. What we can see, though is that Senmiao has an upcoming shareholder meeting in 10 days. The company’s shareholder are set to vote on several topics. One of which will be to authorize the Board of Directors to effect a reverse stock split of the company’s outstanding shares of common stock. This would be in a ratio of between one-for-five and one-for-ten. Right now, the market has continued focusing on things like alternative power and electric vehicles.

Whether or not this more recent activity has anything to do with that is yet to be seen. For now, AIHS stock continues rallying and extending its now 4-day uptrend in the market. 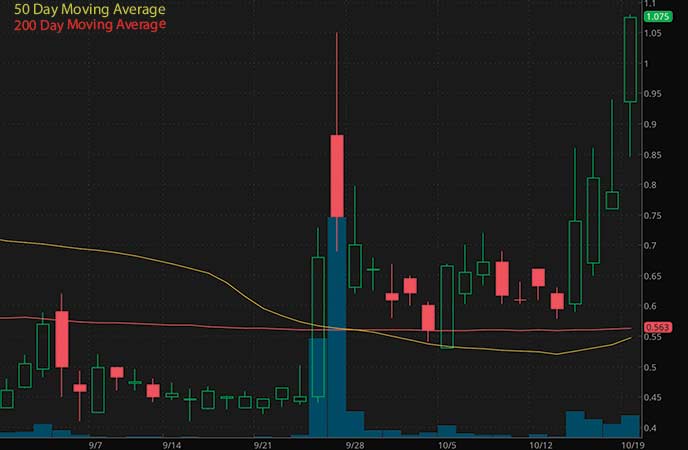