5 Penny Stocks On Robinhood To Buy Under $2; Are They Too Risky?

By: Penny Stocks to Buy, Picks, News and Information | PennyStocks.com - Feed
Looking For Penny Stocks On Robinhood? 4 To Watch This Week

Whether you’re looking for penny stocks on Robinhood, Webull, TD, Etrade, Interactive Brokers, or any of the other online trading platforms, the goal’s the same. Make money then repeat the process. That might sound simple and it is but traders tend to complicate that mission sometimes. The psychology of trading can play a big role in your strategy, overall. Millions of new traders flocked to the market this year due to lockdown measures. It actually boosted the retail market immensely for the simple fact that people wanted to learn a new skill for generating some cash flow.

Fast-forward a few more months and now we’ve got several schools of traders. The first has mastered a profitable trading style and sticks to a plan, for the most part. You’ve also got the “YOLO” traders who still feel like the market is a roulette wheel and let lady luck play a bigger part of their strategy. Then, you’ve got a group that’s somewhere in between. They still want to “bet it all on 00” but they’ve also put together a strategy to become somewhat consistent at times. Where do fall?

At the end of the day, a proven strategy to keep losses small and ride out winning trades longer is clutch. We’ve discussed tier trading before as a means to achieve that goal. Generally speaking, this involves adding to winning positions and cutting losing positions quicker. It also entails starting a trade with a small “test” position to feel out the trade and confirm that you’re right about your thesis on it. If it works out, tier traders add to the position, then tier sell out as the stock moves in the right direction. If that trade doesn’t end up working out, then the capital outlay is far less and the loss is only taken on a smaller sum. More information on tier trading here.

Penny Stocks On Robinhood To Watch

Whatever your strategy is, you should have one. Whether you’re trading penny stocks on Robinhood or other platforms, this is key for consistent profitability. With millions of new accounts on the mobile-first platform, there’s plenty of traders looking for trending penny stocks to watch right now.

Inuvo, Inc. recently saw an uptick in trading activity last week. The daily trading volume went from around 1 million shares previously to upwards of 12.8 million last Wednesday. While there weren’t any headlines last week, there was a filing that came out Friday to note. Inuvo filed the annual meeting of shareholders proxy giving a record date of October 26th for eligible voters. Among the topics to vote on, Inuvo would like to increase its authorized share count to 150 million from 100 million. Many times, companies will do this with a goal of having additional shares to issue for fundraising efforts.

In light of this, INUV stock surged late in the afternoon on Friday. Shares jumped from mi-day lows of $0.3712 to a close of $0.4091. The penny stock continued higher after-hours as well. What’s more is that Inuvo reported preliminary Q3 revenue figures this month. While the pandemic has hurt many businesses in 2020, these results showed a stark difference with an optimistic outlook by management. 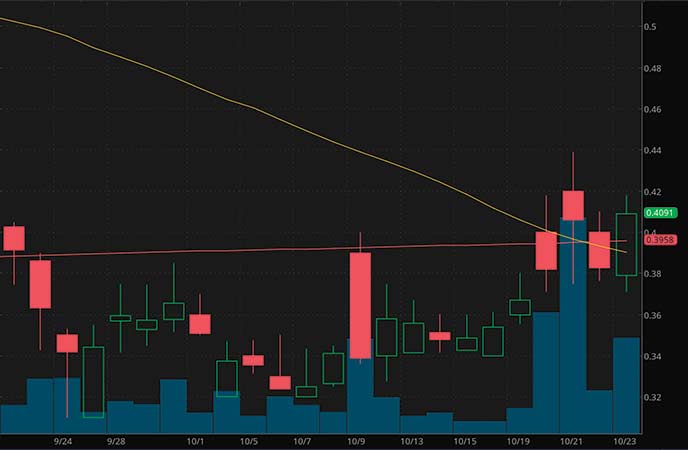 We’ve watched Remark Holdings Inc. since April of this year. Since then, MARK stock has seen explosive breakouts and dramatic breakdowns but remains up nearly 280% since our initial report on Remark’s developments. A lot of the hype has stemmed from Tweets more than it has formal press releases by the company. However, this has trained the market to look at the company’s Twitter page first, above other sources of info. Last week the company pushed off its special meeting of shareholders to November in order to get more time for votes. Similar to Inuvo, Remark is also trying to get an amendment passed to increase its authorized shares.

But this wasn’t the source of excitement in the latest spike for MARK stock. If you guessed that MARK stock jumped after a tweet, you’re right. As the trend remains in place, Remark Holdings tweeting a key piece of information on Friday. It included a video that apparently involved Intel. The tweet read, “First time $MARK @intel selling our technologies together #RemarkAI #KanKan #smartkitchen #computervision.”

This would obviously be big news for any company of Remark’s size. However, it’s important to remember that a deal might also correspond with a filing and/or press release. So far, since the tweet came out on at 2:53 PM on Friday, nothing new has come from the company with regard to either a PR or filing. Is this a move based on hype alone or will Remark confirm more details of this tweet? 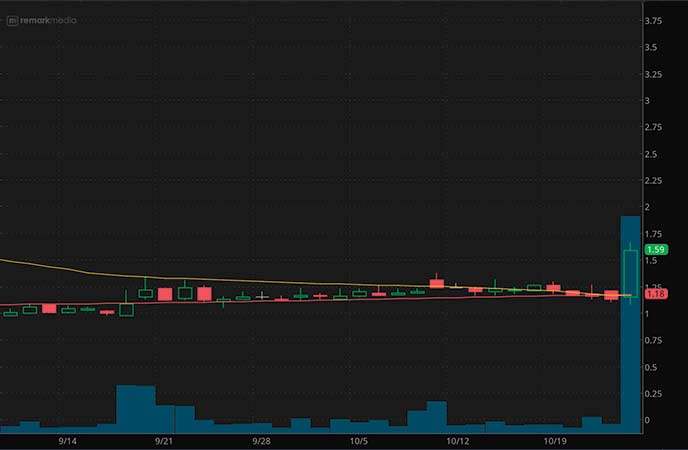 miRagen Therapeutics Inc. has been in rough shape for months and its latest update didn’t help. Its cobomarsen came short of the mark in a mid-stage blood cancer study. Lee Rauch, President, and Chief Executive Officer said, “We have completed this preliminary evaluation and will continue to analyze the final topline data and other secondary SOLAR data as we seek a partner for cobomarsen. Our research and development strategy remains focused on the advancement of our lead program MRG-229 for Idiopathic Pulmonary Fibrosis (IPF).”

[Read More] Are These The Best Penny Stocks To Buy On Robinhood With A Day Job?

This sent shares lower even further, triggering a multi-week downtrend right through the end of last week. What’s also important to note is that the Board of Directors is evaluating strategic alternatives for the company, which it says could include a merger or acquisition. Since reaching a high of $1.61 in July, MGEN stock has fallen nearly 70% as of Friday’s closing bell. So why even mention this ticker on a list of penny stocks right now? While this downtrend certain can continue, Friday’s action was something much different than what the penny stock had seen during the 2 weeks prior. It was the first trading day that MGEN shares didn’t close red. If you look at the chart, since October 9th, the penny stock saw a red close every day.

Furthermore, trading action continued to push shares higher during after-hours on Friday. The MGEN stock reached a high of $0.52 after the close. Whether or not this continues Monday is to be seen. But an irregular move like this could be noted by a few heading into the final week of October. 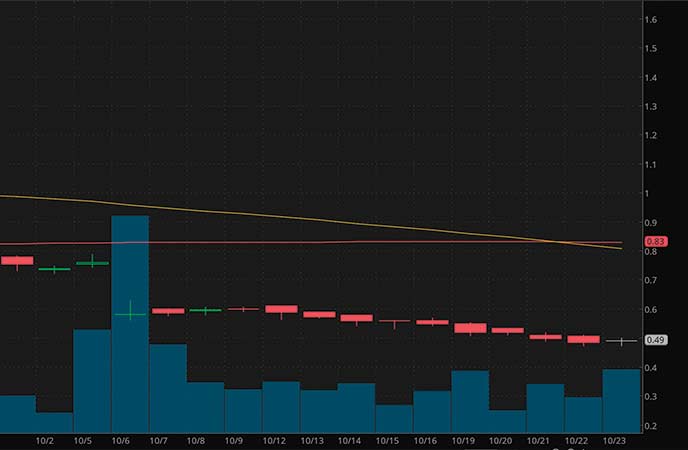 Aileron Therapeutics Inc. is another one of the penny stocks on Robinhood that can be bought for under $2 right now. Shares have been climbing higher since mid March and recently hit a new 52-week high of $2.47. Friday, however, marked a third down day for the penny stock. Shares hit a closing low of $1.90. However, the interesting part is what happened after the closing bell. ALRN stock ended up bouncing back to highs of over $2 during post-market trading. The anticipation might’ve been in advance of what the company would reveal over the weekend at the EORTC-NCI-AACR Annual (ENA 2020) Symposium on Molecular Targets and Cancer Therapeutics.

Saturday, the company announced new positive clinical data from its ongoing Phase 1b trial. The trial demonstrated clinical proof of concept that treatment with ALRN-6924 prior to second-line topotecan administration resulted in a protective effect against severe anemia, thrombocytopenia and neutropenia. This was in patients with p53-mutated small cell lung cancer. The results were featured in a late-breaking poster presentation entitled, “Prevention of Chemotherapy-induced Myelosuppression in SCLC Patients Treated with Dual MDM2/MDMX Inhibitor ALRN-6924.”

Considering this happened over the weekend, it will be interesting to see how the market responds Monday morning. 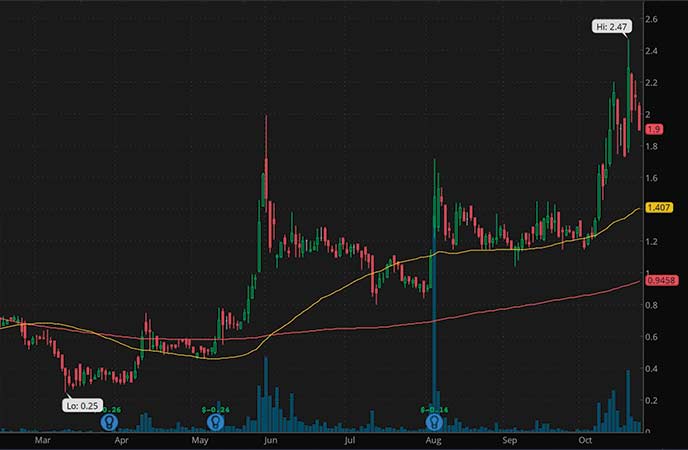 Genius Brand International Inc. saw another big day of trading activity on Friday. This is in comparison to the previous week’s trading action. Since October 14th, the highest share volume day for the penny stock was around 24.2 million shares. Thursday and Friday, GNUS stock traded more than 27 million and 43 million respectively. What’s more, is that the penny stock continued trading after the closing bell on Friday.

Genius Brands is an entertainment-focused company, specifically digital entertainment. During most of 2020, GNUS stock has been one to watch. However, most recently, the trend is relatively sideways with intermittent spikes in price here and there. While there hasn’t been an established trend since the summer, the last 45 days have seen an uptick in price. Since September 9th, the price has climbed from around $1 to a closing price last week of $1.55

The move comes on the heels of a few key updates. Toward the end of September, Genius inked a deal with Samsung for its Kartoon Channel! to be carried across Samsung’s Smart TVs. The company has also been licensing new content to feature in its digital lineup. While there haven’t been many new updates recently, the late-week momentum is something to note. Will that continue into Monday’s opening session? 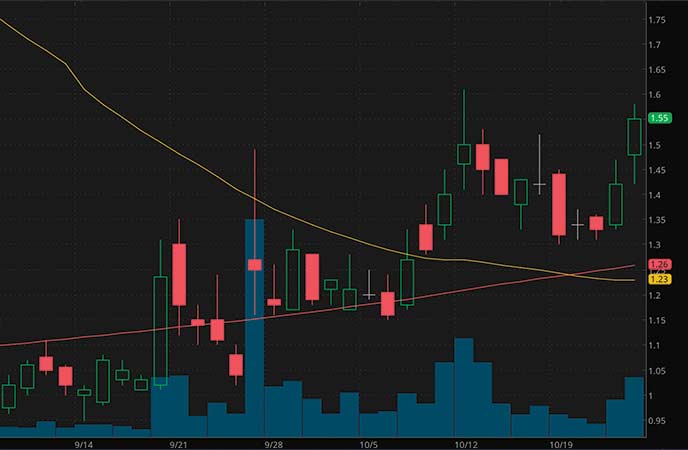