Are These The Best Renewable Energy Stocks To Watch Before December 2020?

Renewable energy stocks are having an interesting year. To say that energy companies have had a volatile ride in the stock market throughout 2020 is putting it lightly. Two key happenings are to blame for this. First, the COVID-19 pandemic interrupted most energy supply chains. Specifically, it has done so by reducing the demand for transport fuel as planes are grounded and general movement restrictions are set. On the positive side, Joe Biden is the current president-elect of the U.S. and will be inaugurated on January 20, 2021. As Biden is a big advocate for the industry, his victory has reinvigorated investors’ interest in the sector.

Most top renewable energy stocks have been seeing surges in their stock prices. Evidently, key industry players like Enphase Energy (ENPH Stock Report) and SolarEdge Technologies (SEDG Stock Report) are seeing gains upwards of 100% this year. The shift towards renewable energy has been happening despite all the chaos of 2020. Clearly, the industry shows no signs of slowing as the stage appears to be set for renewable energy in 2021. This is no doubt because of the growing climate change concerns in the last few years, if not decades.

An emerging player in the industry that could be worth watching is FuelCell (FCEL Stock Report). It is a Connecticut-based fuel cell power company. The company focuses on designing, manufacturing, operating, and servicing Direct Fuel Cell (DFC) power plants. DFC power plants run on natural gas and biogas. FuelCell is the largest publicly traded fuel-cell manufacturer in the U.S. Furthermore, it operates over 50 plants globally, one of which is the largest fuel-cell park in the world, Gyeonggi Green Energy Fuel cell park. The company’s two key markets are ultra-clean power and renewable power which rely on renewable biogas.

FuelCell has seen a colossal 97% rise in share price over the last week. Investors have clearly been eyeing this top renewable energy stock since Biden was elected president. In its third-quarter fiscal posted in September, the company reported a 21% year-over-year decrease in revenue. CEO Jason Few explained that the company is currently focusing on long-term investment into its current assets. He elaborates by saying the results for the quarter reflect the impact of investments made towards maximizing the efficiency of its plants. Eagle-eyed investors seem to notice that FuelCell is prepping for a busy time ahead. 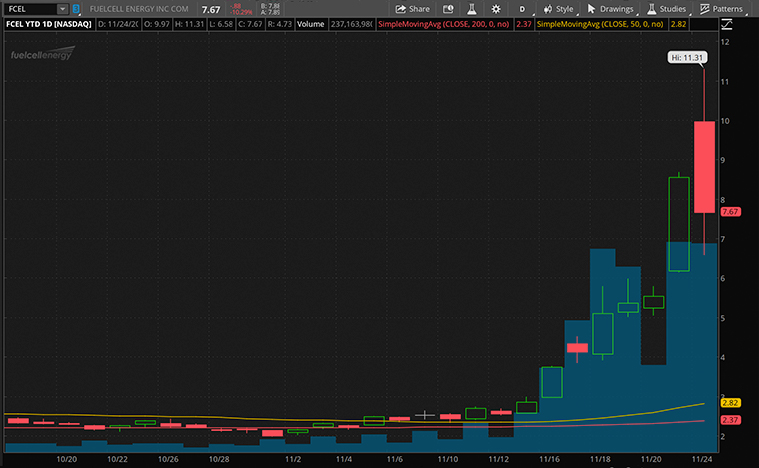 Notably, these preparations are likely due to the company obtaining $8 million in funding from the U.S. government. The U.S. Department of Energy announced this last month. It will support the design and manufacture of FuelCell’s SureSource electrolysis platform. This project represents a key step in FuelCell’s path to commercializing its high-efficiency solid oxide electrolysis technology. Fundamentally, this could possibly be a milestone expansion in the form of a new business model for the company. Investors are evidently eager to see what the future holds for this upcoming contender in the industry. In closing, would you be watching FCEL stock today?

Next up is Ballard (BLDP Stock Report). The Canada-based company is a global provider of innovative clean energy and fuel cell solutions. It develops and manufactures proton exchange membrane (PEM) fuel cell products. The primary markets for these PEM fuel cells are the heavy-duty motive, portable power, material handling, and engineering services. Surprisingly, Ballard has seen a 27% rise in share price over the last week.

The company reported its latest third-quarter fiscals earlier this month. It saw a 4% year-over-year increase in total revenue. A key contributor to this was a 161% year-over-year increase in Heavy Duty Motive revenue. The company reported higher shipments of fuel cell products to China in the quarter. Furthermore, it also saw a 540% increase in Backup Power revenue at the same time due to an increase in shipments to European customers. The company appears to be doing well internationally. As a result, this could attract investors regardless of its single-digit rise in total revenue over the last year. 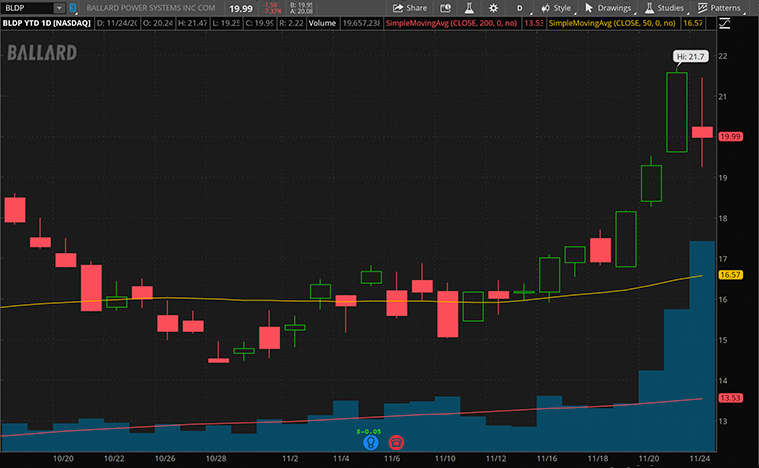 Recently, Ballard signed a definitive agreement with Audi AG in late October. This involves the FCgen®-HPS which is a high-performance, zero-emission PEM fuel stack. In essence, the FCgen®-HPS is fully designed and developed by Ballard and Audi AG via their joint Technology Solutions program. This fuel stack boasts industry-leading propulsion for a wide range of vehicles. The deal marks another power density milestone for the company as it expands Ballard’s rights to distribution. With its expanding repertoire, could BLDP stock deserve a spot on your watchlist?

[Read More] Looking For Best E-Commerce Stocks To Buy That Are Not Named Amazon Or Shopify? 3 Names To Know

Finally, we have Bloom (BE Stock Report). Bloom is no newcomer to the renewable energy scene. The California-based company manufactures and markets solid oxide fuel cells that produce electricity on-site. Its Bloom Energy Server is currently operating at approximately 700 locations across diverse industries in four countries. In essence, the server is an advanced distributed energy platform that operates 24/7 even during power outages. Namely, this is a crucial selling point as it provides constant power allowing its clients to operate without disruptions.

Undoubtedly, Bloom is having an exciting week on the stock market. Its share prices are up by 16% in the last week. What is causing all this commotion with Bloom? To add to the mystery, the company posted a seemingly lackluster third-quarter fiscal in late October. It saw an 11% decrease in revenue year-over-year with a 2.6% year-over-year increase in acceptances. Investors are likely watching Bloom as it has been improving its balance sheet over the last quarter. CEO K. R. Sridhar explained this in the latest shareholder letter. Bloom was able to secure $230 million in financing through 2.5% Green Convertible Notes due 2025. Furthermore, the company cleared outstanding debts worth $328 million. This has substantially improved its capital structure. 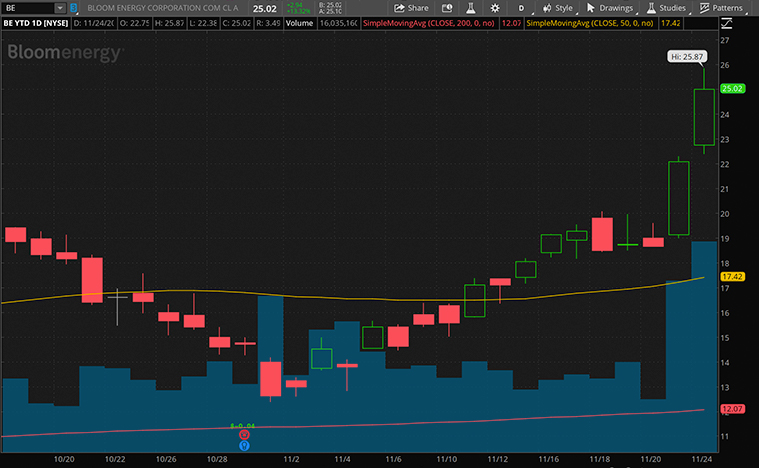 On the positive side, Bloom and SK Engineering and Construction (SK E&C) have recently secured a massive deal. Essentially, Bloom will be working to supply fuel cells powered by green hydrogen. These fuel cells will be put to use in an industrial complex in South Korea. The company is set to deliver 1.8 MW of solid-oxide fuel cells. Admittedly, this is a step in the right direction for the upcoming energy company as the South Korean government is looking to shift towards renewable energy. Could this be enough to make BE stock a top renewable energy stock to buy? You be the judge.