By: TechCrunch
Fiberplane, an Amsterdam-based early stage startup that is building collaborative notebooks for SREs (site reliability engineers) to collaborate around an incident in a similar manner to group editing in a Google Doc, announced a ​​€ 7.5M (approximately $8.8 million USD) seed round today. The round was co-led by Crane Venture Partners and Notion Capital with […]

Fiberplane, an Amsterdam-based early stage startup that is building collaborative notebooks for SREs (site reliability engineers)  to collaborate around an incident in a similar manner to group editing in a Google Doc, announced a ​​€ 7.5M (approximately $8.8 million USD) seed round today.

The round was co-led by Crane Venture Partners and Notion Capital with participation from Northzone, System.One and Basecase Capital.

“We were always going back and forth between metrics, logs and traces, what I always call this sort of treasure hunt, and figuring out what was the underlying root cause of an outage or downtime,” Hernandez van Leuffen told me.

He said that this experience led to a couple of key insights about incident response: First, you needed a centralized place to pull all the incident data together, and secondly that as a distributed team managing a distributed system you needed to collaborate in real time, often across different time zones.

How you react when your systems fail may define your business

When he left Oracle in August 2020, he began thinking about the idea of giving DevOps teams and SREs the same kind of group editing capabilities that other teams inside an organization have with tools like Google Docs or Notion and an idea for his new company began to take shape.

What he created with Fiberplane is a collaborative notebook for SRE’s to pull in the various data types and begin to work together to resolve the incident, while having a natural audit trail of what happened and how they resolved the issue. Different people can participate in this notebook, just as multiple people can edit a Google Doc, fulfilling that original vision. 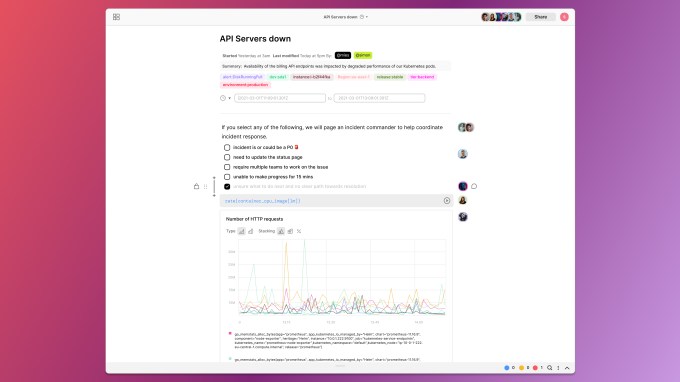 He doesn’t plan to stop there though. The longer term vision is an operational platform for SREs and DevOps teams to deal with every aspect of an outage. “This is our starting point, but we are planning to expand from there as more I would say an SRE workbench, where you’re also able to command and control your infrastructure,” he said.

Today the company has 13 employees and is growing, and as they do, they are exploring ways to make sure they are building a diverse company, looking at concrete strategies to find more diverse candidates.

“To hire diversely, we’re re-examining our top of the funnel processes. Our efforts include posting our jobs in communities of underrepresented people, running our job descriptions through a gender decoder and facilitating a larger time frame for jobs to remain open,” Elena Boroda, marketing manager at Fiberplane said.

While Hernandez van Leuffen is based in Amsterdam, the company has been hiring people in the UK, Berlin, Copenhagen and the US, he said. The plan is to have Amsterdam as a central hub when offices reopen as the majority of employees are located there.