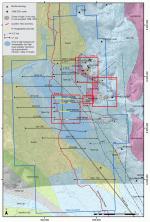 VANCOUVER, BC--(Marketwired - August 04, 2016) - Copper North Mining Corp. ("Copper North" or the "Company") (TSX VENTURE: COL) announces that it has commenced exploration of its Thor property in north west British Columbia. Initial exploration will focus on evaluation of targets in the Thor East area followed by drilling in both the Thor West and Thor East areas. Diamond drilling of these targets is scheduled for late August (see map Appendix A).

The Thor project provides Copper North an opportunity to explore for porphyry copper-gold type mineralization in the slopes and valleys adjacent to the shutdown Kemess South mine and mill complex in North Central BC.

Copper North completed additional geophysical surveying in the fall of 2014, covering much of the claims area in Thor West, and further defined targets for reconnaissance drilling in the Moose Valley portion of the property. The geophysical surveying defined a large induced polarization target in Moose Valley initially identified as Area 1 (see map Appendix A) and now referred to as the Thor West target. The Thor West area is hidden by overburden on lower slopes in the valley bottom. Magnetic data indicate a large anomaly of elevated magnetic susceptibility that hosts a smaller area of reduced magnetics and modest increase in chargeability from the induced polarization (IP) survey data. The Thor West IP target covers an area approximately 4 kilometres long by 2 kilometres in width.

The Thor East target is located in the more mountainous area forming the eastern portion of the property. Historical exploration work in the 1980's identified anomalous copper and gold in soil and rock geochemical samples in the steeper terrane that flanks Moose Valley (areas 2, 3, and 4 on the target map). Six shallow drill holes totalling 692 metres were completed in area 3 in 1997. Four holes tested shear zones in the Takla volcanic rocks. One drill hole tested the contact between granodiorite and volcanic rocks and intersected 60 metres grading 0.12% copper and 0.04 g/t gold (see map Appendix A). The potential quantity and grade is conceptual in nature, there has been insufficient exploration to define a mineral resource and it is uncertain if further exploration will result in the target being delineated as a mineral resource.

The anomalies for drilling flank the small granodiorite intrusions in contact with the Takla volcanic rocks. Widespread gossan zones are related to the oxidation of sulphide mineralization. The area is structurally complex, suggesting two intrusions, or perhaps a single intrusion that has been juxtaposed on faults, covering an area 6 kilometres long by 2 kilometres wide.

The technical information in this news release has been prepared, reviewed and approved by Dr. Harlan Meade, P.Geo, the President and CEO of Copper North and a qualified person within the meaning of NI 43-101.

On behalf of the Board of Directors:
Dr. Harlan Meade
President, CEO and Director

Copper North is a Canadian mineral exploration and development company. Its assets include the Carmacks Project located in the Yukon, the Redstone Property located in the Northwest Territories, and the Thor Property in British Columbia. Copper North trades on the TSX Venture Exchange under the symbol COL.

This news release includes certain forward-looking information or forward-looking statements for the purposes of applicable securities laws. These statements include, among others, statements with respect to proposed exploration and development activities and their timing. These statements address future events and conditions and, as such, involve known and unknown risks, uncertainties and other factors, which may cause the actual results, performance or achievements to differ materially from those anticipated in such statements. Important factors that could cause actual results to differ materially from the Company's expectations include, among others, the timeliness and success of regulatory approvals, the timing and success of future exploration and development activities, exploration and development risks, market prices, exploitation and exploration results, availability of capital and financing, general economic, market or business conditions, uninsured risks, regulatory changes, defects in title, availability of personnel, materials and equipment, unanticipated environmental impacts on operations and other exploration risks detailed herein and from time to time in the filings made by the Company with securities regulators. In making the forward-looking statements, the Company has applied several material assumptions including, but not limited to, the assumptions that the proposed exploration and development of the mineral projects will proceed as planned, market fundamentals will result in sustained metals and mineral prices, and any additional financing needed will be available on reasonable terms. The Company expressly disclaims any intention or obligation to update or revise any forward-looking statements whether as a result of new information, future events or otherwise except as otherwise required by applicable securities legislation.