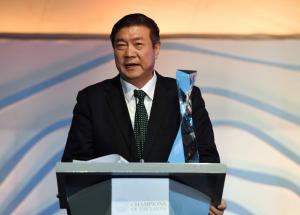 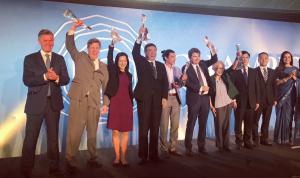 2017 Champions of the Earth Awards Ceremony

PHOENIX, ARIZONA, THE UNITED STATES, December 7, 2017 /EINPresswire.com/ -- On 5 December, 2017, six environmental leaders received the Champions of the Earth award during the 3rd UN Environment Assembly, including three from China:the Saihanba Afforestation Community was awarded for inspiration and action; bike-sharing startup Mobike for entrepreneurial vision; and Chairman of Elion Resources Group Wang Wenbiao, who leads the Kubuqi desertification control, was given a lifetime achievement award. It is noteworthy that Wang is the first Chinese national to receive this award.

“The wealth of Chinese ecological civilization” has become the hot topic of the award ceremony. Naysan Sahba, spokesperson and Director of the UNEP Division of Communications and Public Information, told reporters that winners of the Champions of the Earth award were chosen through the most rigorous selection process, and the most outstanding figures worldwide in the field of environmental protection. “We are delighted to see Chinese winners who have dedicated themselves to environmental protection. Their action lets us know about many inspiring projects China has done for environmental protection.”

The UN Environment Assembly is the world's highest-level decision-making body on the environment. This year’s Assembly, held in Nairobi, Kenya, on 4-6 December, gathers over 4,000 heads of state, ministers, business leaders and civil society representatives to brainstorm ideas for a pollution-free planet.

Launched in 2004 and awarded on an annual basis, Champions of the Earth is the UN’s most influential and the world’s highest environmental honor to recognize individuals and organizations whose actions have had a significant positive impact on the environment.

Building an ecological civilization, as put in Comrade Xi Jinping's report at the 19th CPC National Congress, is vital to sustain the Chinese nation's development, and has been attached with an elevated importance and an expedited schedule. The honors for Kubuqi, Saihanba, and Mobike demonstrate to the world China’s ecological conservation achievements under President Xi’s leadership.

Saihanba Forest Farm is a vivid example of China’s vigorous endeavour in its ecological civilization development. Saihanba, situated on the southern edge of Otindag Sandy Land, Inner Mongolia, was home to dense forests, birds and other wild animals, but due to over-exploitation, the land gradually became barren and sand from deserts in the northern part of China was blown heavily to Beijing and other cities. Since 1962 when the farm was built, its constructors have dedicated themselves, for three generations, to building the world’s largest artificial forest that now covers 1.12 million Mu (acres), turning its forest coverage rate from 11.4% to the current 80%. They have created a miracle to turn desert into forest, and proved the ideology that clear waters and green mountains can become gold and silver mountains through action. They are the embodiment of the Saihanba spirit of ‘mission, entrepreneurship and green development’. In August this year, Xi Jinping, General-secretary of the CPC Central Committee, made important instructions to the inspiring stories of Saihanba constructors, and emphasized that we should consistently promote the development of ecological civilization and strive to achieve a new mode of harmonious development between men and nature.

The Kubuqi, China's 7th largest desert, was once a seemingly lifeless dust bowl where inhabitants lived in dire poverty. In order to improve the harsh condition, Wang Wenbiao and his team have been striving persistently for 30 years to transform over 6000-square-kilometers of desert into a land of green and lift more than 100,000 people out of poverty. In his congratulatory letter to the 6th Kubuqi International Desert Forum, President Xi noted that China had always attached great importance to combating desertification and made remarkable achievements, contributing to the building of beautiful China as well as the global cause of ecological conservation, and tjat Kubuqi was a good example of China's endeavor and success.

“Without President Xi’s instruction that clear waters and green mountains are invaluable assets, or China’s great strategy of building an ecological civilization, or the strong support from the UN and the international community, the marathon-style combat with desertification would not have yielded such results, nor would I have become a world champion,” said Wang Wenbiao when he received the award. He also pledged that “Combating desertification is a lifelong career for me and I always value green mountains and clear waters as silver and gold mountains. From Kubuqi to One Belt One Road and to the whole world, I will continue my work to turn more and more desert areas into lands of green and happiness.”

BON Cloud is a China content supply platform featuring stories from China cities and organizations, encompassing topics such as travel, CSR, arts, business, and technology. BON Cloud invites publishers and broadcasters from around the world to bid to publish China content for profit.