FONAR Celebrates the 50th Anniversary of the Origination of the MRI 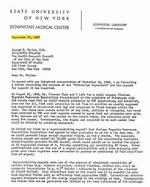 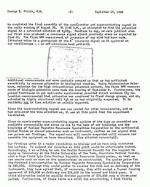 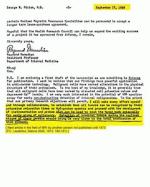 On September 17, 1969, Dr. Damadian sent a letter to Dr. George Mirick of the Health Research Council of the City of New York requesting financial support for equipment to follow up his promising line of research.

In that letter, Dr. Damadian wrote, “I will make every effort myself and through collaborators, to establish that all tumors can be recognized by their potassium relaxation times or H2O-proton spectra and proceed with the development of instrumentation and probes that can be used to scan the human body externally for early signs of malignancy.  Detection of internal tumors during the earliest stages of their genesis should bring us very close to the total eradication of this disease,” marking the origination of the MRI scanner.

It was during the following year, on June 18, 1970, that Dr. Damadian performed the first experiments whereby he discovered the distinctly elongated time-lapsed signal marking differences between normal and cancerous tissue, as well as differences among various normal organs themselves that make the MRI image.  “That was my ‘Eureka!’ moment,” said Dr. Damadian.  The results of his experiments were subsequently published in the journal Science on March 19, 1971.

Today thousands upon thousands of MRI scanners are scanning millions of patients every year all over the world. According to December 4, 2003 issue of The Economist, “About 22,000 MRI machines around the world were used in 60 million examinations in 2002 last year.”

Perhaps Professor Donlin Long, M.D., former Chairman of Neurosurgery, Johns Hopkins University, says it best: MRI is “The Single Most Important Diagnostic Discovery in the History of All of Medicine.” Professor Long made this statement on November 10, 2018, when Dr. Damadian was awarded the Excellence in Medicine Medal of Honor from the Chiari & Syringomyelia Foundation at Brooks’s in London, England.  He was joined by Fraser Henderson, M.D., a neurosurgeon and member of the steering committee for the Chiari & Syringomyelia Foundation, who said, “Raymond Damadian revolutionized medicine with the discovery and development of MRI.”

Dr. Damadian’s September 17, 1969 letter to Dr. George Mirick may be viewed online at http://fonar.com/nobel.htm#1969_letter.  The letter may also be viewed in the three attachments to this release.

FONAR, the Inventor of MR Scanning™, is located in Melville, NY, was incorporated in 1978, and is the first, oldest and most experienced MRI company in the industry. FONAR introduced the world’s first commercial MRI in 1980, and went public in 1981. FONAR’s signature product is the FONAR UPRIGHT® Multi-Position™ MRI (also known as the STAND-UP® MRI), the only whole-body MRI that performs Position™ Imaging (pMRI™) and scans patients in numerous weight-bearing positions, i.e. standing, sitting, in flexion and extension, as well as the conventional lie-down position. The FONAR UPRIGHT® MRI often detects patient problems that other MRI scanners cannot because they are lie-down and ”weightless” only scanners. The patient-friendly UPRIGHT® MRI has a near-zero patient claustrophobic rejection rate. As a FONAR customer states, “If the patient is claustrophobic in this scanner, they’ll be claustrophobic in my parking lot.” Approximately 85% of patients are scanned sitting while watching TV.

FONAR has new works-in-progress technology for visualizing and quantifying the cerebral hydraulics of the central nervous system, the flow of cerebrospinal fluid (CSF), which circulates throughout the brain and vertebral column at the rate of 32 quarts per day. This imaging and quantifying of the dynamics of this vital life-sustaining physiology of the body’s neurologic system has been made possible first by FONAR’s introduction of the MRI and now by this latest works-in-progress method for quantifying CSF in all the normal positions of the body, particularly in its upright flow against gravity. Patients with whiplash or other neck injuries are among those who will benefit from this new understanding.

FONAR’s substantial list of patents includes recent patents for its technology enabling full weight-bearing MRI imaging of all the gravity sensitive regions of the human anatomy, especially the brain, extremities and spine. It includes its newest technology for measuring the Upright cerebral hydraulics of the central nervous system.  FONAR’s UPRIGHT® Multi-Position™ MRI is the only scanner licensed under these patents.

UPRIGHT® and STAND-UP® are registered trademarks and The Inventor of MR Scanning™, Full Range of Motion™, Multi-Position™, Upright Radiology™, The Proof is in the Picture™, True Flow™, pMRI™, Spondylography™, Dynamic™, Spondylometry™, CSP™, and Landscape™, are trademarks of FONAR Corporation.

This release may include forward-looking statements from the company that may or may not materialize. Additional information on factors that could potentially affect the company's financial results may be found in the company's filings with the Securities and Exchange Commission.

Attachments accompanying this announcement are available at: