South Bay Religions Come Together in the Name of Peace

Gathering at the Church of Scientology to ignite a grassroots movement for tolerance and peace. 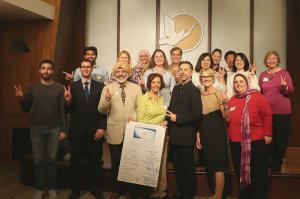 Uniting in support of tolerance and peace.

Church of Scientology San Jose and the local chapter of United for Human Rights organized an interfaith roundtable to discuss challenges and solutions to peace.

The Church of Scientology of San Jose hosted the event attended by religious leaders, local human rights groups and individuals who strive for tolerance and peace.

“Peace begins with us,” said Joey Percival, Director of Public Affairs of the Church of Scientology San Jose and emcee of the event. “We have to be a personal example of peace before we can inspire others to follow. It grows from the individual to the family, groups and activities, and ultimately impacts mankind.”

Religious leaders shared their experience in animated roundtable discussions that took up the challenges they have encountered and offered suggestions on how to overcome them.

Those attending signed a Pledge for Peace and agreed to bring an additional person with them to attend the next meeting and to keep doing so to create a ripple effect throughout the entire region.

The Church of Scientology works with representatives of many religions to support and encourage interreligious dialogue, religious freedom, constitutional law and respect for religion in society. Article 18 of the Universal Declaration of Human Rights states: Everyone has the right to freedom of thought, conscience and religion; this right includes freedom to change his religion or belief, and freedom, either alone or in community with others and in public or private, to manifest his religion or belief in teaching, practice, worship and observance.

The Church of Scientology and Scientologists support United for Human Rights and make its educational materials available free of charge. For more information, watch 30 Rights Brought to Life on the Scientology Network.