5 Penny Stocks To Buy For Under $2 After Fresh News

By: Penny Stocks to Buy, Picks, News and Information | PennyStocks.com - Feed
These Penny Stocks Are Soaring After Big News

You could say that when it comes to penny stocks, catalysts are big. Right now, there’s someone (maybe you) putting together a list of penny stocks searching for anything from breaking news to technical chart patterns. You might even be looking for reasons why a particular stock made “that move” today.

Well, the “reason” is known as a catalyst. This can be anything from a simple low-float breakout because people are buying or it can be a big piece of penny stock news. In either case, it’s important to understand the catalyst because some may give a more lasting trend in the market.

Of course, that trend can be in either direction. But I would hope that if you’re looking for stocks that could make money, the catalysts would have a chance at triggering a bullish move. In any case, here’s a list of penny stocks that can be bought for under $2 apiece; many of which just came out with big news this week.  But does that mean they are a “Buy” right now?

This week, Reebonz Holding (RBZ – Free Report) had a relatively flat first half. On Monday, the stock began its Monday session trading around $1.10 and stayed there right up until about 2:20 PM EST on Wednesday. It was at that point that the market turned its attention to this penny stock, seemingly out of nowhere. Before I get into what happened, understand one thing: on average, this stock trades less than 900,000 shares per day around $1. So, it wouldn’t appear that there’s any sort of major built-in trading.

Why I mention that is because today, RBZ stock traded more than 4.39 million shares before the close and the continued on well after. Today the penny stock closed at $1.84 after hitting highs of $1.99. The big news today which could be on traders’ minds tomorrow has to the with the company’s latest partnership with TWIST. It is one of Hong Kong’s luxury fashion boutiques.

Harry Lam, E-Commerce Manager of TWIST, stated, “Following the decade-long success of Reebonz in Southeast Asia and Asia Pacific, we felt that this partnership will benefit both companies in the long run. In addition to the opportunity for us to amplify our brand awareness, we believe that by working with Reebonz, we will be able to further improve our consistency in delivering high-quality products to aspiring consumers across the region. 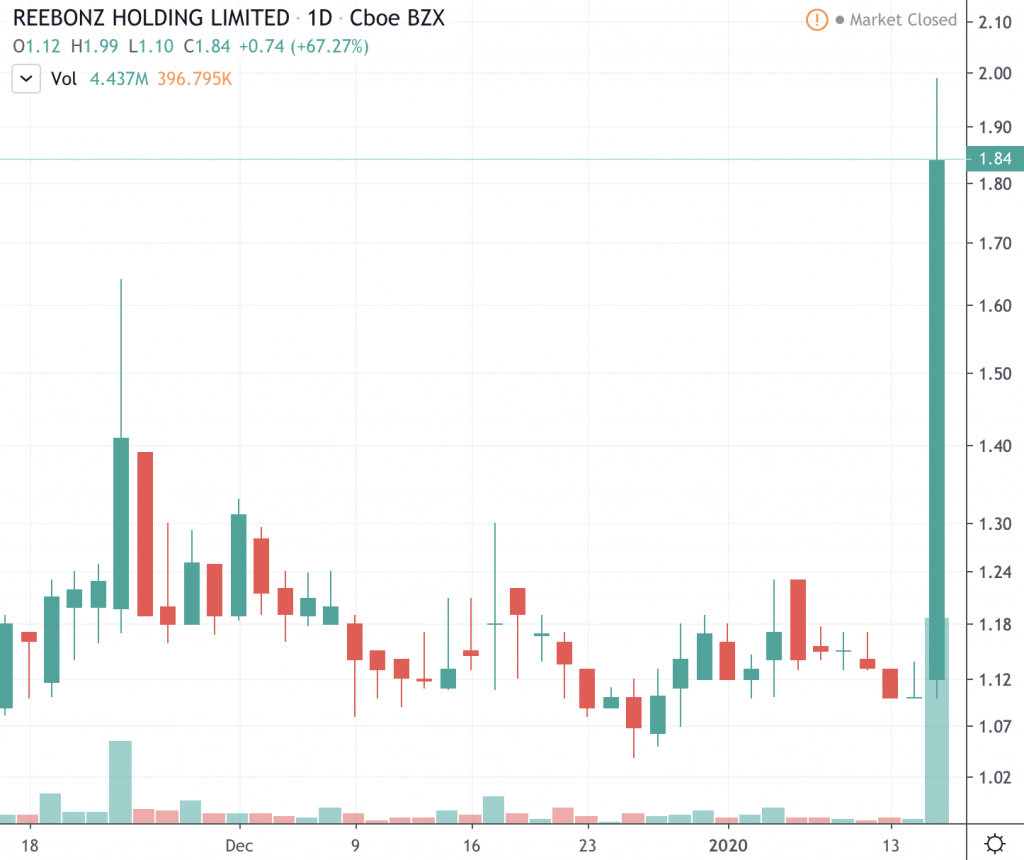 This has been one of the top penny stocks to watch on our site for a while now. We first covered Dare Bioscience (DARE – Free Report) back in November. At the time it was trading around $1. Since then, the biotech penny stock has managed to reach highs of over $2.20. Of course, it pulled back later this week, however, momentum is still in motion as of Wednesday’s late afternoon trading.

Earlier this week, Dare announced a licensing deal with Bayer, one of the biggest companies in the sector. That obviously helped boost interest in the company. But following this, the company followed the news up with yet another big update on Wednesday.

Dare announced that it will host a live conference call to discuss its agreement with Bayer. This could give more insight into the specifics of the deal in my opinion. Something to note is that Dare’s press release also stated that the company will discuss the broader partnering strategy as well. As this is about a week away, January 22 will become a date to keep in mind. 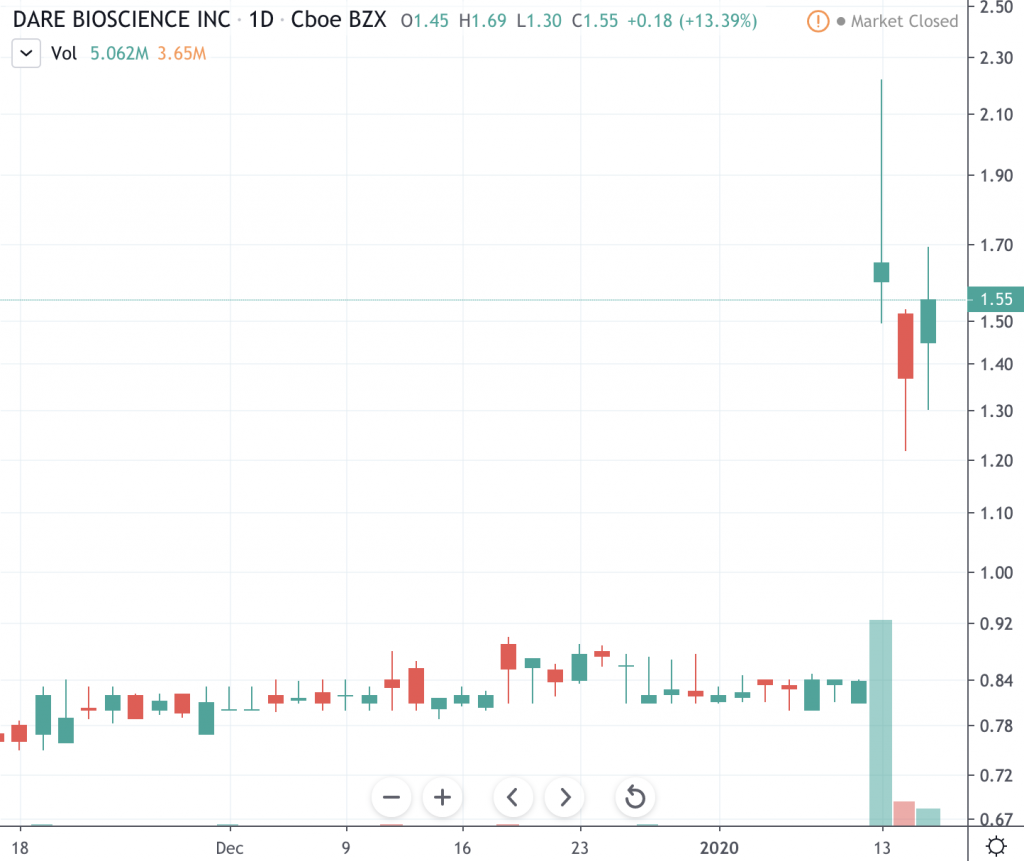 Penny Stocks To Buy Under $2: Cemtrex

This was one of the penny stocks we discussed in today’s morning update, “4 Penny Stocks To Watch on Wednesday.” It was also a company we discussed a day prior to announcing financial results. Certainly, Cemtrex (CETX – Free Report) lived up to the hype as shares skyrocketed to highs of $2.75 from a previous close of $1.18.

Now that you’ve got the lay of the land, Cemtrex actually had a strong open but ended up pulling back to $1.82 by the close on January 15. However, the company followed up Tuesday’s news with 2 more big updates. First, before the open, Cemtrex announced a $700k deal for video surveillance systems.

But then after the close, the company reported that its board had authorized a buyback of 2 million shares of common stock of the company and Series 1 Preferred stock over 3 years. That news seems to have resonated well with the market as the penny stock started to see more aftermarket volume pour in on the 15th. Will that continue again into the Thursday session? 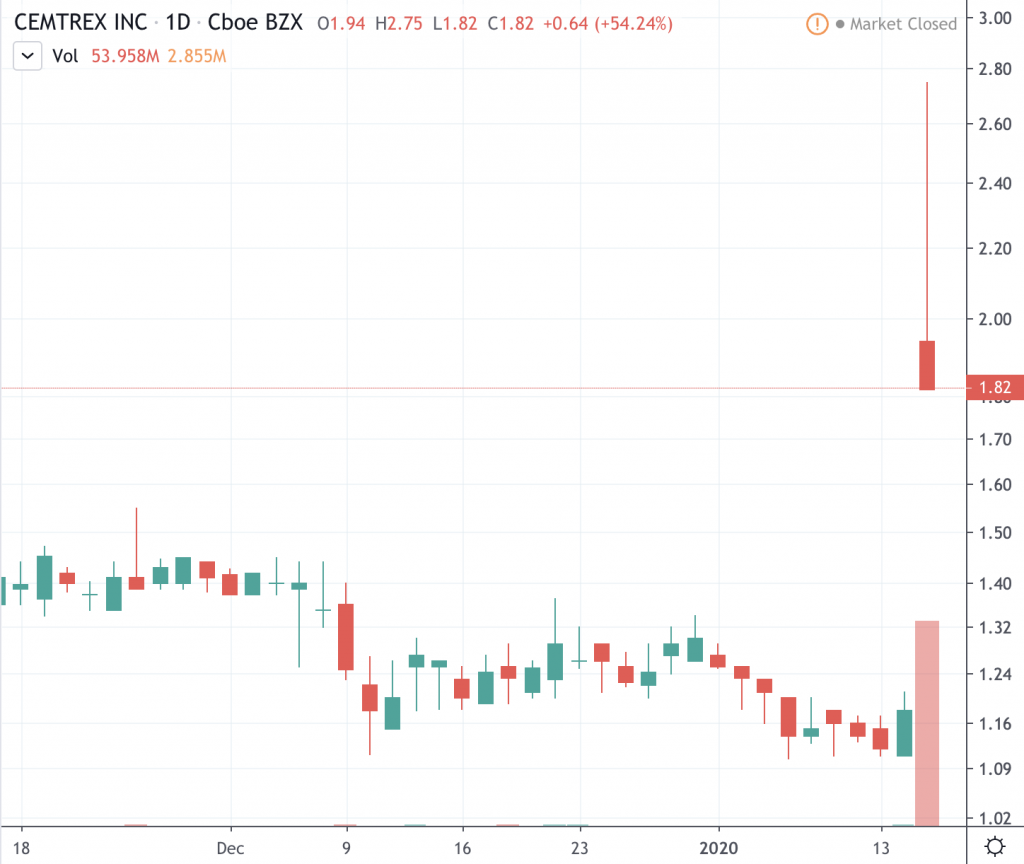 Next on this list, Ritter Pharmaceuticals (RTTR – Free Report) didn’t have the same kind of after-market news as the previous companies. However, it did see a strong close on Wednesday. In fact, since hitting 52-week lows in late December, RTTR stock has been back on the move.

The interesting part as I said above is that there hasn’t been any news. There also hasn’t been any filings from the company. So, is this just a momentum fueled move? In any case, momentum has built up and the stock traded highs during the after market hours on Wednesday. 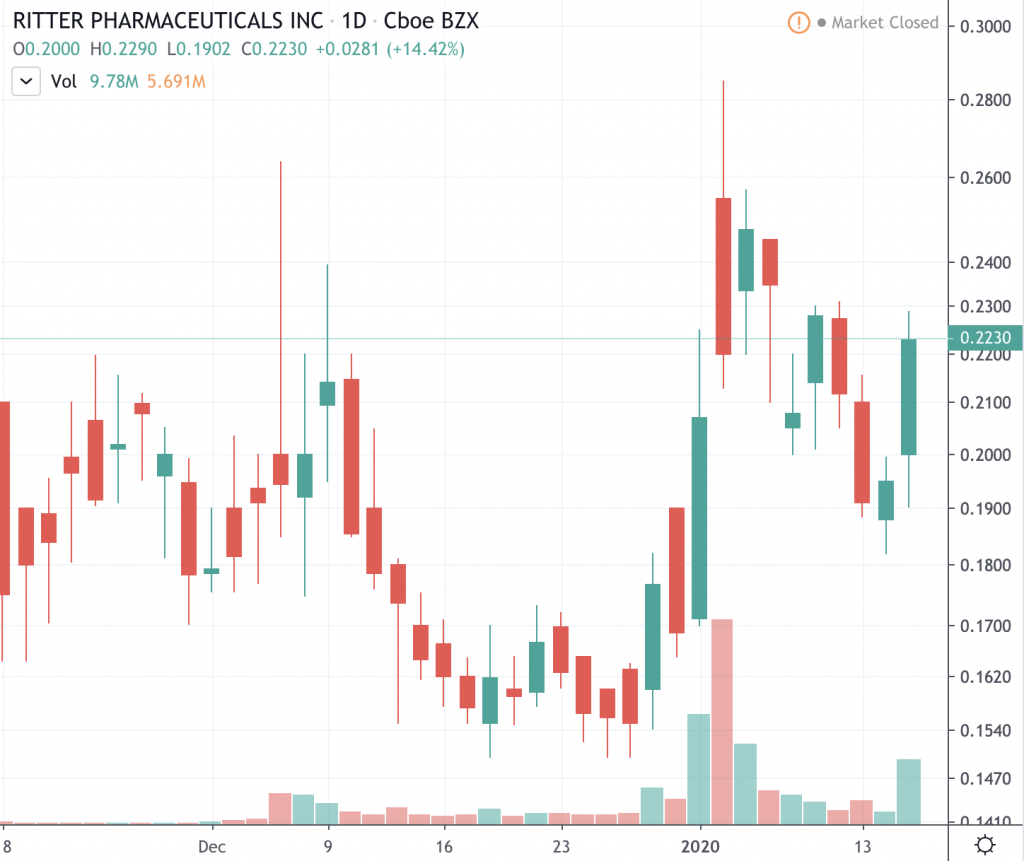 Finally, DropCar, Inc. (DCAR – Free Report) saw a surge in trading late on Wednesday afternoon. For most of the session, DCAR stock traded very quietly and in a tight range between $0.83 and $0.87. However, with about 20 minutes left in the session, DropCar stock exploded to highs of $0.98 by the closing bell.

Again, there was no news from the company and the last filing was made on December 20. However, as far as speculation goes, we’ve still got something to look at. DropCar signed a merger deal with AYRO, an electric vehicle company. The merged company would effectively focus on creating an electric car company for things like campus management, last-mile delivery, transport, and the like. So what’s that got to do with right now?

In its official press release announcing the merger, specifics of the deal show that the “merger is expected to close in the first half of 2020.” But, no updates have been made since then. Considering the late-breaking move, it could be one of the names on a few penny stocks watch lists on Thursday. 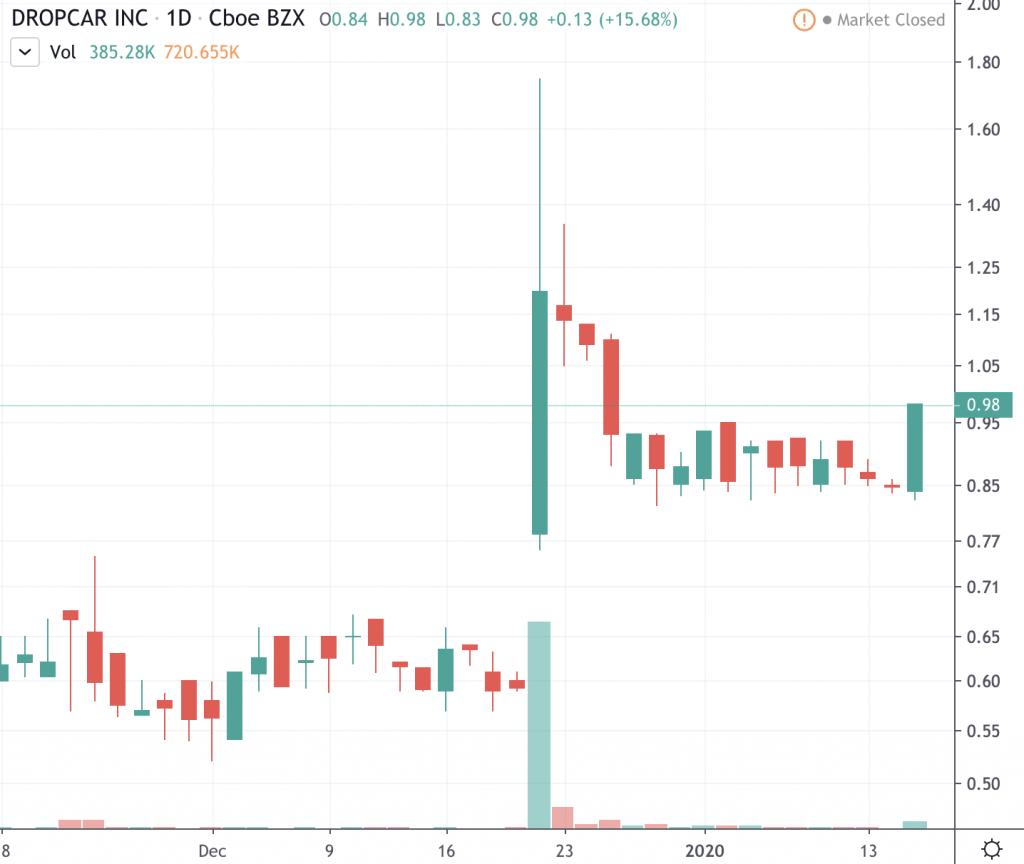