By: Penny Stocks to Buy, Picks, News and Information | PennyStocks.com - Feed
Penny Stock News Has These 4 Names Trending This Week

When it comes to penny stocks, the news is easily one of the top catalysts to look for. Key developments are important for investors to pay attention to, obviously. Aside from the initial headlines, you’ll also want to actually read the press release or filing in detail. All too often I see traders just react based on a single headline without reading a PR.

“But isn’t the headline all you need” is a frequent topic of discussion believe it or not. My answer to that is a resounding “no” for a few reasons. First, some headlines can be misleading, plain and simple. There’ve been cases where certain penny stocks breakout big simply because the headline had the right keywords in it.

What usually follows is a big sell-off. On the flip side, other penny stocks didn’t initially breakout because the headline didn’t reveal the size and scope of what the company was announcing. Once traders actually took time to read that news, the stock ended up climbing. In both cases, reading the news and not just the headline could’ve protected traders from loss or positioned them early for a big move.

This week we’ve got a whole new round of headlines turning heads. On top of that, we’ve also got another round of earnings and data readouts to look for. As Monday gets off and moving, here are a few penny stocks to watch after releasing big news.

Xeris Pharmaceuticals (XERS Stock Report) has been on our watch lists since July. This came just after Xeris announced a $20 million public offering. That was when XERS stock dropped under $2.50. However, during the 3rd quarter, shares have seen a slow and steady uptrend. Instead of attention focusing on a COVID-related strategy, Xeris has pursued its main pipeline treatments.

In July, Xeris reported additional data from a Phase 1b Comparative study of its concentrated diazepam formulation: XP-0863 for seizures. The FDA provided feedback that Xeris’ drug development program for XP-0863 could advance directly into a Phase 3 registration study in both pediatric and adult patients with epilepsy. On top of that Xeris launched its Gvoke HypoPen™ and implemented a $0 copay offer for commercially insured patients.

However, after beating on its latest round of earnings, it appears that things are back in focus. This week, Xeris reported an EPS and sales beat versus Wall Street expectations. The company reported an EPS loss of $0.63, which came in higher than the ($0.73) expected. Sales also came in at $1.99 million compared to estimates of $1.86 million. Paul R. Edick, Chairman, and Chief Executive Officer said that the company is “building on our momentum with the recent Gvoke HypoPen launch that has already accelerated prescription growth, recent and upcoming regulatory dialogue around our clinical programs, and an anticipated European regulatory decision for our ready-to-use glucagon application later this year or early next year.” 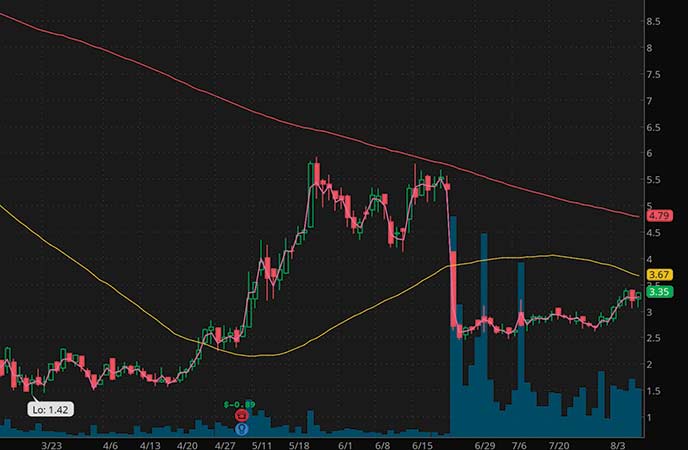 Another one of the biotech penny stocks to watch this quarter has been Ocugen Inc. (OCGN Stock Report). While earnings are expected to come out later this week, that’s not wy OCGN stock is in focus right now. On August 10th, the company announced receipt of the 4th Orphan Drug Designation for OCU400 from the U.S. FDA. This Designation is for OCU400 in the treatment of PDE6B gene mutation-associated retinal diseases.

If you’ve followed the Ocugen story, you’ll remember what happened last month. At the end of July, Ocugen announced that the U.S. FDA granted Orphan Drug Designation for its OCU400 in the treatment of rhodopsin mutation-associated retinal degeneration. Why is Orphan Drug Designation important? Typically, the FDA Office of Orphan Products Development grants orphan designation for novel drugs or biologics that treat a rare disease or condition affecting fewer than 200,000 patients in the U.S. OCU400 was designed for restoring retinal integrity and function across a range of genetically diverse inherited retinal diseases.

[Read More] Are These Penny Stocks On Your Watchlist In August 2020?

“I am very encouraged by the potential for OCU400 given the uniqueness of Ocugen’s Modifier Gene Therapy Platform and the fact that FDA has issued four ODDs for this product. I look forward to Ocugen commencing clinical trials for OCU400 next year,” said Carl D. Regillo, M.D., F.A.C.S., member of Ocugen’s Retina Scientific Advisory Board. The next chapter in the story likely comes Friday. August 14th is when the company reports its quarterly results. Will OCGN stock be higher or lower by this time on Friday? Comment below if it’s on your list of penny stocks to watch this week. 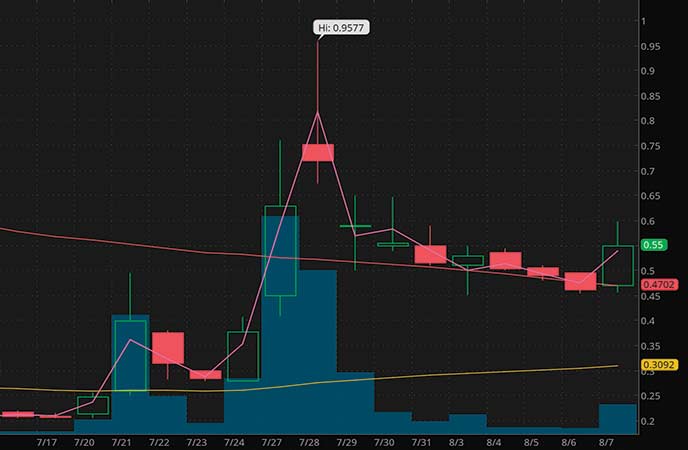 iBio Inc. (IBIO Stock Report) is no stranger to big moves. It has been on the list since last December. While it has worked toward a coronavirus vaccine, it has also achieved strong industry relationships. For example, IBM Watson Health selected iBio to receive 18 months of use of the IBM Clinical Development solution, free-of-charge.

iBio previously reported that it anticipates data from the preclinical immunization studies of its two COVID-19 vaccine candidates, IBIO-200 and IBIO-201 will be available in Q3-2020.

Monday morning saw an update from the company on its IBIO-201. The company said early functional testing of mouse antisera from IBIO-201 immunized mice demonstrates the presence of antibodies that interfere with the binding of SARS-CoV-2 spike protein sequences to human ACE2 in ex vivo assays. Essentially, that translates to IBIO-201 produced antibodies against SARS-CoV-2.

“We are encouraged by these pre-clinical data, which demonstrate IBIO-201’s ability to generate an immune response to SARS-CoV-2 sequences and neutralize protein interaction,” said Tom Isett, Chairman & CEO of iBio. “We expect to gain more insight as we complete data analysis of both of our COVID-19 vaccine candidates.” 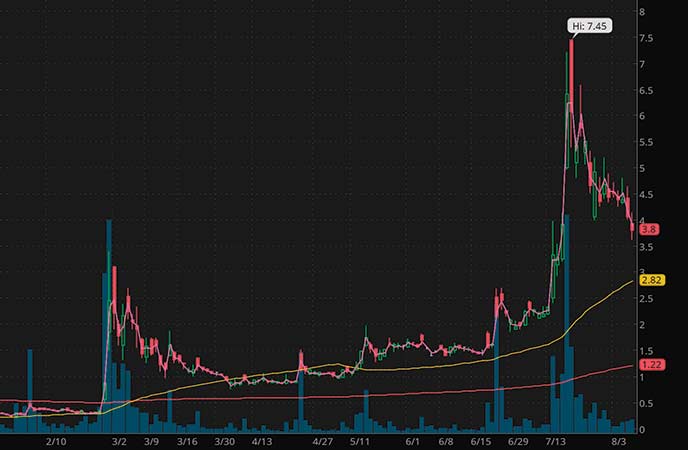 One of the less assuming coronavirus penny stocks to watch this year was actually iFresh Inc. (IFMK Stock Report). Originally speculated on as a food delivery company, momentum built further after another big development for the company. iFresh announced that it signed a purchase agreement to acquire a 70% interest in a face mask company. After paying $600k, iFresh will be the proud new owners of 70% interest in Xiamen DL Medical Technology Co. It then began offering face masks through its chain and online retail sites.

It was night and day different from when we first began following the company last November. This week, iFresh is back on the radar after another key update. Monday morning, the company announced entry into a definitive agreement to acquire Jiuxiang Blue Sky Technology (Beijing) Co. Ltd. Jiuxiang is a technology company that engages in supply chain financial services, integrated payment systems, and prepaid card marketing systems.

The company also developed a unique supply chain platform that includes online shopping malls, prepaid card payment systems, and online-to-offline shopping. “iFresh believes it will be able to expand to a broader customer base that the Company had previously limited access to, unlocking a key market for our online grocery business. We are confident that the deployment of Jiuxiang’s integrating supply chain platform will help us operate more efficiently, while simultaneously gaining an edge on the competition,” said Long Deng, Chairman of iFresh. 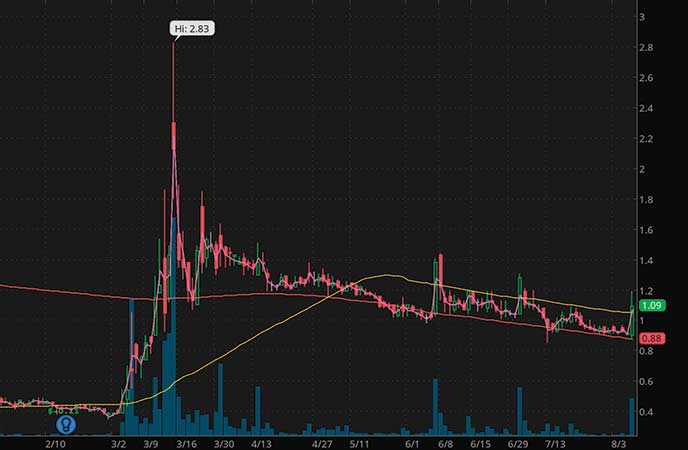