This morning, like every morning, we discussed some trending penny stocks to watch premarket. While all three showed strength at the open, one has clearly become a standout in the stock market today. That one penny stock is SPI Energy Co. Ltd. (SPI Stock Report) and it has become a force to reckon with on Wednesday.

Shares were trading below $1 on Tuesday and so far today, have reached highs of more than $46 per share. Quite literally overnight, $1000 in SPI stock is now worth $40,000. While no one can predict such a huge move like this, we can look for cues as to what triggered it and how SPI stock got from 0-100 so quickly.

Was this just a random act of momentum or was there something else going on with this penny stock. To answer that question, let’s first look into the company itself. What does SPI Energy do? Despite what the chart shows after today, SPI stock has actually been in a nice uptrend for the better part of the last 2 quarters. Here’s a chart from this morning that shows what I’m talking about: 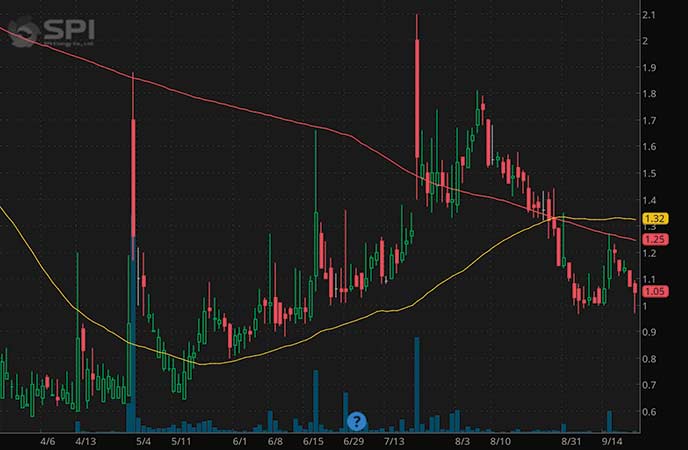 As you’ll quickly see, shares moved up from around $0.60 in April to highs of around $2.10 in July then back around $1 recently; $1.05 to be exact as of yesterday’s close. Overall, the uptrend held and was intact going into today’s session. The writing may have already been on the walls as to a transition for SPI Energy. Earlier this year the board approved a spin-off of the company’s SP Orange Power subsidiary. This is SPI’s independent power producer in Europe.

What some thought to have been the initial spark was sympathy with solar stocks. As we discussed in an earlier article today about better earnings from leading solar company JinkoSolar (JKS Stock Report). Jinko crushed estimates in its quarterly. The Street expected the company to report an EPADS of $0.61. Jinko came with EPADS of $0.93 for the quarter. Sales also beat estimates during the quarter. This triggered a spike in JKS stock of 20% during the morning session alone. Considering JKS is a $28+ stock, it’s a considerable move.

Even this being a factor today wasn’t the spark that light this 4,340+% move.

Today’s breakout stemmed from news that SPI launched of EdisonFuture, Inc. Not only will EdisonFuture develop electric vehicles, but it will also create EV charging solutions. Obviously there’s plenty of attention on EV stocks following Tesla’s Battery Day on Tuesday.

Mr. Xiaofeng Peng, Chief Executive Officer of SPI Energy, commented, “This is an important milestone for SPI Energy. As Tesla has demonstrated, an end-to-end business model in the renewable energy space can generate significant value. With the addition of EV and EV charging segments to our diverse solar business, we are positioning SPI Energy for the future of renewable energy.”

EdisonFuture is a U.S.-based company. In today’s press release, the company also said it would focus on partnering with “major manufacturers.” Whether or not this becomes another NKLA type scenario is yet to be seen. This is a fresh deal for SPI that it said compliments its photovoltaic solutions including solar and battery storage technologies. 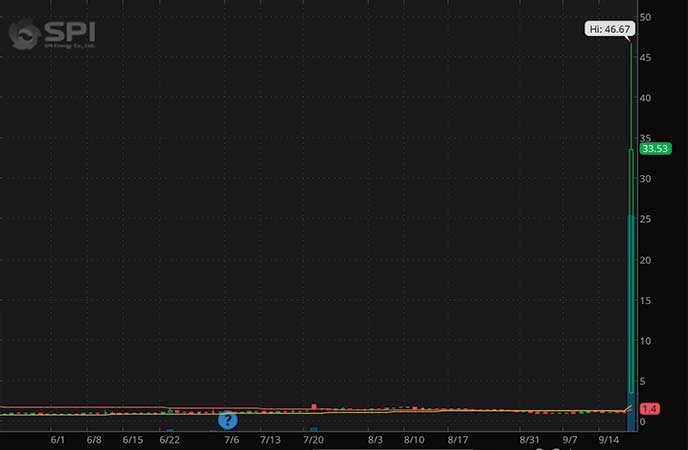 Along with this news, we’ve also got a stock with a lower float. There are varying figures that point to a roughly 7 million share float. However, at the very most, we can go off of the last reported outstanding share count. This shows a figure just shy of 15 million shares. By all accounts, this is a low float penny stocks, and with that comes volatile swings.

What Are Low Float Penny Stocks?

If you’re newer to trading penny stocks, you might not be familiar with the term, “Float”. This is essentially the total amount of shares available to trade in the open market at a given time. It doesn’t include restricted shares or anything like that. So this is the raw number that average trades have access to. The float will also never be larger than the Outstanding Share count. That’s why I referenced this figure above.

[Read More] Aurora Cannabis: One Of The Penny Stocks To Watch In 2020?

The float can change depending on restricted shares becoming unrestricted and selling or insiders selling shares via FORM 4. However, those shares are accounted for in the Outstanding Share count, which is reported each quarter. Needless to say, the fundamentals may not mean as much as what the technical outcome can be. This is what we’re seeing today. What is considered a Low Float? Everyone has their own definition but I would say the highest-end would start at 20 million. Most low float penny stocks won’t have an O/S above 15 million shares.

The lower the float, the fewer the shares available to trade in the open market. Simple economics teaches us that low supply and high demand pushes prices higher. This is what we saw with former penny stocks like Kodak (KODK Stock Report) and countless others earlier this year. We even saw it with one of the sympathy trades as a result of the SPI breakout, Sunworks (SUNW Stock Report). The solar stock broke out hugely following SPI’s mega run. Its outstanding share count is under 17 million. Just remember, in almost every case of a short-term 1,000+% move, you need to keep your head on straight and ask yourself, can this stock really sustain itself at these levels? In the more recent case of KODK, we know how things have transpired in the market.

There Are Risks To Consider

Just because SPI stock ran so aggressively, that doesn’t mean it’s worth the added risk following the big move. Low floats also mean high volatility creating big wins but also opening the door to big losses. Furthermore, there could be other factors beyond technicals here. As we discussed earlier this morning, last month the company filed a prospectus for a public offering price of up to $100,000,000.

Essentially, the company can choose at any point to offer some or all of this $100m in the form of stock at a determined price “from time to time”. In light of this, it might be wise to keep this piece of info in the back of your head while FOMO has started fueling the market in SPI stock. In any case, it was a huge move and a big win for readers especially those who’ve followed since our first update in May. Leave us a comment below if SPI stock was a big winner for you on Wednesday.