With Eric “Goose” Gustafson Behind the Wheel, Coast Packing’s ’69 Noonan Hemi ProCharger Pro Mod Camaro ‘Made the Ground Shake’ – And Grabbed the Big Prize at 3.66 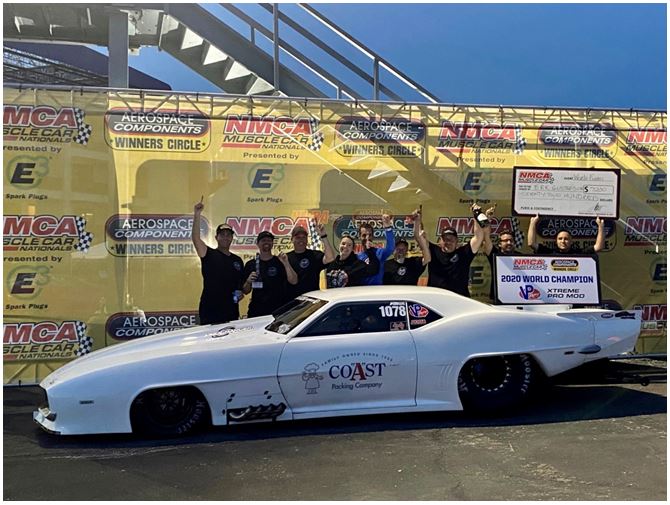 “While a global pandemic made parts of the 2020 season problematic, racers persisted and put it all on the line at the 19th Annual Nitrous Supply NMCA World Street Finals presented by Chevrolet Performance, Sept. 24-27 at Lucas Oil Raceway in Indiana,” wrote Mary Lendzion in NMCA Digital.

“High horsepower from VP Racing Lubricants Xtreme Pro Mod cars made the ground shake, and it was felt for sure when Eric Gustafson goosed the gas pedal in his Coast Packing and PTP Racing-tuned Camaro for a big, smokey burnout and a 3.66 to set the pace in the category.  He went on to another 3.66 to win over Randy Adler, who was absolutely no slouch with a 3.74 in the final round of eliminations.”

It was that kind of a weekend.  On Saturday, Lendzion described R&E’s explosive power in this way: “Making a bullet of a pass was Eric Gustafson, who lit the board with a 3.68 and 204 mph to set the pace in the second round of VP Racing Lubricants Xtreme Pro Mod qualifying.”

“This win could not have been sweeter – the team delivered when it mattered most and everyone contributed throughout a season that just got better as it went on,” Gustafson enthused.  “As I’ve been saying since racing resumed, I could not be more proud of our team and their ‘never quit’ attitude and execution.  My deepest thanks to my family, our employees at Coast Packing, our sponsors, and all the racing fans that support drag racing.  We’ll all savor this for a bit… and then get back to the strip for a record-shattering 2021.

“As it has all season long, the on-track crew of Cameron Hensley, John Urgo, Jason Lee, Patrick Barnhill, and off-track team of Tim Lyons and his talented crew at Lyons Custom Motorsports, Jimmy Rector, Darrell Makins at Noonan Race Engineering, Procharger and many others that support us helped the team meet the challenge of traveling the eighth of a mile quicker than our rivals,” he said.  “Likewise, veterans Nick ‘Dumbo’ Strohbeen and Ben Liedel made invaluable contributions to the R&E Racing/Coast Packing team during the 2020 season.”

Now marking its 98th year in business, Coast Packing Company (www.coastpacking.com), a closely held corporation, is the number one supplier of animal fat shortenings – particularly lard and beef tallow — in the Western United States. The company sells to major manufacturers, distributors, retailers, smaller food service operations and leading bakeries. The company participates actively in diverse ethnic markets – from Hispanic retail chains, with its VIVA brand, to various Asian specialty markets. Based in Vernon, Calif., Coast Packing Company is regional, national and, increasingly, global. In some cases, supplier relationships are multigenerational, extending back 50 years and more. Coast is a founding member of the Healthy Fats Coalition (http://www.healthyfatscoalition.org/).