VANCOUVER, BC, Oct. 21, 2020 /PRNewswire/ - Trillium Gold Mines Inc. (TSXV: TGM) (OTCQX: TGLDF) ("Trillium" or the "Company") is pleased to report that it has entered into an agreement to acquire 293 units in 90 claims covering a total of 5,960 hectares (the "Property") east of Great Bear Resources' Dixie property, underlain by the Confederation Greenstone Belt of metavolcanic and metasedimentary rocks.

Bill Paterson, Vice President of Exploration comments "Most of the property package which we have entered into an agreement to acquire in The Confederation Greenstone Belt was explored mainly for base metals in the past. Many operators either ignored numerous occurrences of gold mineralization or never assayed for gold. This acquisition presents an opportunity to explore a large package of rocks with high potential for hosting gold in the Birch-Uchi greenstone belt. The structural corridor, which is associated with Great Bear's Dixie Project, appears to be continuous along this large land package with similar stratigraphy and fault structures as those on the Moose and Caribou Creek blocks. We see similar characteristics on the Copperlode West claims which we have also acquired."

Russell Starr, CEO of Trillium Gold comments "The land packages being acquired are prospective exploration targets given they lie along and near the structural corridor that includes the Great Bear Dixie Lake Project. The property acquisition fits our strategy of investing in opportunities that have high gold discovery potential."

Trillium Gold will pay C$180,000 and issue 200,000 Trillium gold shares and 200,000 purchase warrants exercisable for a period of 2 years and having an exercise price of C$5.00 under the acquisition agreement. Completion of the acquisition is subject to the approval of the TSX Venture Exchange.

There is a high probability that the Great Bear Resources' Dixie Project lies along the Confederation-Balmer contact. The high-strain structural zone hosting the LP Fault mineralization, is traceable from the Dixie Property eastwards based on regional aeromagnetic data, through the favourable Confederation rocks of the Birch-Uchi greenstone belt. This relationship is suggested to exist for many of the fault splays cutting the Confederation Greenstone Belt.

The LP Fault target on Great Bear Resources Dixie Project is reported to contain high-grade gold mineralization controlled by structural and geological contacts, with lower grade disseminated gold surrounding and on the flanks of the high-grade intervals. The dominant gold-hosting stratigraphy consists of felsic volcanic and sedimentary rock units. Trillium Gold believes that the same stratigraphy within the Dixie LP Fault target is also present on the Moose and Caribou Creek blocks as well as the Copperlode West claim block, hence the Company's interest in these newly acquired, highly prospective claims.

The Moose Creek and Caribou Creek claim blocks are contiguous to a former Noranda property containing the Dixie 18 deposit with a historic, non-NI 43-101 compliant resource reported by Noranda as 110,000 tons (99,820 tonnes) grading 0.5% Cu and 12.5% Zn to a depth of 150m. These properties also appear to lie along the "Mine Trend" that hosts the Cochenour and Red Lake Mines operated by Evolution Mining. There is excellent road access to the east and west ends of the claim blocks.

On the Caribou Creek claims, 6 historical holes were drilled by Lightval Mines and Selco. The four holes by Lightval Mines comprise a total of 633.3m drilled, yet only 15 samples were collected. Of these samples, two showed anomalous gold values at less than 200 ppb Au.

The Moose and Caribou Creek claim blocks are northwest of the Otter Property where Portofino Resources recently sampled gold-bearing quartz veins in close proximity to sulphide mineralization on surface.

The Copperlode West block of claims is contiguous to the east with the Joy Zone, Creek Zone, South Zone, the Caravelle Zone and the Diamond Willow Zone. 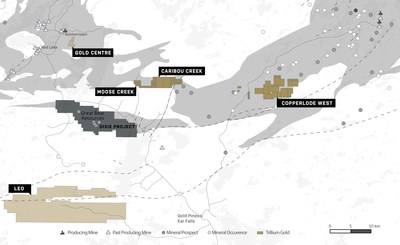 The technical information presented in this news release has been reviewed and approved by William Paterson QP, PGeo, VP of Exploration of Trillium Gold Mines., as defined by NI 43-101.

Trillium Gold also reports that it has granted incentive stock options, exercisable to purchase up to an aggregate of 1,125,000 shares of the Company, to officers and consultants of the Company pursuant to the Company's stock option plan (the "Plan"). The options are all exercisable at the price of $1.70 per share until October 20, 2025, subject to any earlier termination in accordance with the Plan. The grant of options is subject to regulatory approval.

All securities issued in connection with the Shares for Debt Settlement are subject to a statutory hold period expiring on February 9, 2021 in accordance with applicable securities legislation.

On behalf of the Board of Directors,

Trillium Gold Mines Inc. is a British Columbia based company engaged in the business of acquisition, exploration and development of mineral properties located in the highly prospective Red Lake Mining District of Northern Ontario.

This news release contains forward-looking information, which involves known and unknown risks, uncertainties and other factors that may cause actual events to differ materially from current expectation. Readers are cautioned not to place undue reliance on these forward-looking statements, which speak only as of the date of this press release. The Company disclaims any intention or obligation, except to the extent required by law, to update or revise any forward-looking statements, whether as a result of new information, future events or otherwise.