By: Penny Stocks to Buy, Picks, News and Information | PennyStocks.com - Feed
Looking For Penny Stocks Under $1 Right Now? Here Are 3 To Watch

Whether you’re using ThinkOrSwim, Webull, Etrade, or Robinhood, penny stocks have become synonymous with big gains this year. However, with that high reward also comes higher risks. The fact of the matter is simple: lower prices tend to lead to higher volatility. Earlier this week we talked about low float penny stocks. In these cases, we’re talking about a low supply of shares in the overall retail market.

If there are periods of higher demand, the general economic theory steps in and says a low supply/high demand environment means higher prices. In light of this, we saw plenty of these low float penny stocks taking off recently. It doesn’t matter if they were $4 stocks or stocks under 10 cents. The make-up of low floats lends themselves to some of the most extreme volatility.

But what about the “average” share structure? Let’s say all things are the same no matter the price of the penny stock you’re looking at. In that case, we’re just talking about price fluctuations. The lower the price, the higher the volatility is generally the situation to factor in. Obviously, any penny stocks under 10 cents that move by a penny will shift in value by 10% or more, instantly.

The same move from something like a $3 penny stock and you’re barely noticing a percentage change. It’s just up to you as a trader to decide how much risk you’re willing to take on. No matter what, just have a proper trading strategy in place to navigate whatever volatility you may encounter.

In the case of penny stocks on Robinhood, this is where things can get “interesting”. Earlier this year, millions of new traders flocked to the gamified trading application. Easy set-up and easy money transfer were two key factors cited by new users. Furthermore, the ease of actually placing a trade was attractive enough to bring in some3 million new users at the start of 2020.

While it has experienced its share of technical issues, it’s still a very popular platform, especially among the Reddit penny stocks crowd. Regardless if you use or don’t use the platform, the social discussion among traders who do could be a barometer of social sentiment for certain penny stocks. In light of this, are any of these penny stocks under $1 on your watch list right now? Remember, just because they’re “cheap” may not mean they’re a sure thing when it comes to securing profit.

IMAC Holdings Inc. (IMAC Stock Report), from a technical perspective, has had a tough time breaking above its 50 day moving average over the last 2 months. What’s more is even when it has, IMAC stock retreats soon after. Thursday saw shares of the penny stock testing this technical level for the second time this month. It also experienced some of its highest share volume in several weeks.

What was behind the move? There weren’t any new updates from the company and the last filing was from last week. As far as sector momentum goes, medical stocks are always on watch. IMAC owns and manages outpatient clinics that provide regenerative, orthopedic and minimally invasive procedures and therapies. In September, the company partnered up with Safe Balance, LLC to implement multi-factorial fall risk assessment services for individuals with balance deficiencies.

Something else to note is that IMAC received FDA Authorization to begin clinical studies of its umbilical cord-derived allogenic mesenchymal stem cells for the treatment of bradykinesia. This disease is the gradual loss and slowing down of spontaneous body movement, due to Parkinson’s disease. It’s a 12 month trial that we haven’t seen any updates on since the August update. Other than that, IMAC hasn’t posted any potential fundamental catalysts to justify the recent momentum. 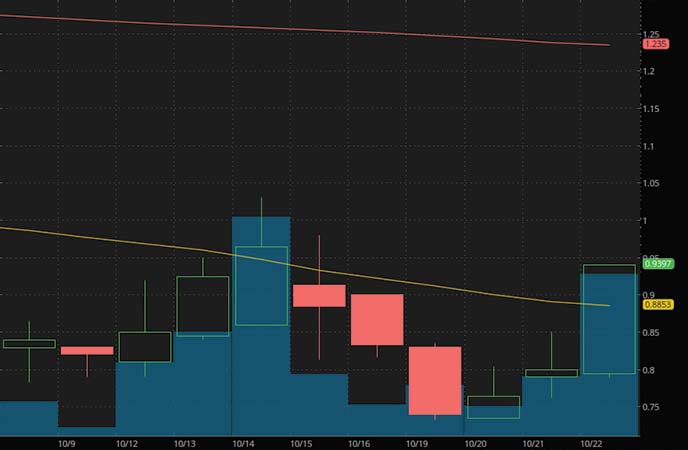 Similar to IMAC, Orbital hasn’t posted anything that would be considered a fundamental catalyst in its news or filings recently. However, it’s worth mentioning that sector sympathy might play a role with companies like it. We saw a surge of interest in energy stocks over the last few months. You’ll see that in late-September, OEG along with plenty of other oil & gas, alternative fuel, and alternative power stocks took off running. That trend hasn’t concluded quite yet.

Today, former breakout energy stocks like Sunworks (SUNW Stock Report) and CBAK Energy (CBAT Stock Report) were also surging without any evidence of a headline catalyst. Given the nature of the move, it’s going to be important to monitor volume closely. Especially when you’re talking about stocks under $1, a slight 10 cent move can change the entire outlook of your trade. Right now, OEG stock’s 52-week high sits at $1.31. Will that be the case if this type of momentum continues? 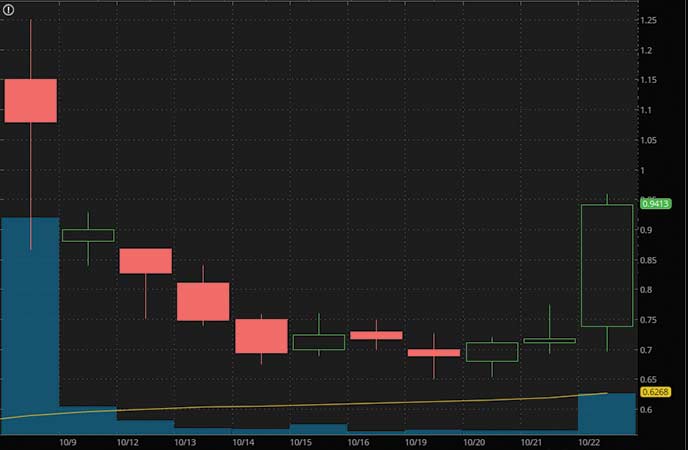 Novan Inc. (NOVN Stock Report) is another one of the penny stocks on Robinhood trading under $1 right now. The company isn’t in the energy sector. However, Novan is in one of the more popular industries for volatile penny stocks: biotech. We discussed the company earlier this week as it has gained some nice momentum late in October. The company announced positive in vitro results of its NITRICIL™ platform technology earlier this month.

Results showed the potential efficacy of its NITRICIL™ as an antiviral against SARS-CoV-2. Novan initiated in vitro assessments targeting the reduction of viral burden on human bronchial epithelial cells to evaluate NITRICIL™ as a potential nasal treatment option.

Earlier this week the company hosted a key opinion leader roundtable discussion with investors. While there wasn’t much reaction in the market around the timing of that KOL roundtable, NOVN stock has begun moving later this week. On Thursday, shares held support around its 50 and 200 day moving averages. Furthermore, NOVN stock saw another day of above-average trading volume.

Something to keep in mind is that last week Novan received a decision to grant a European patent application titled, “Topical Compositions And Methods Of Using The Same”, which has also become a point of focus for traders recently. 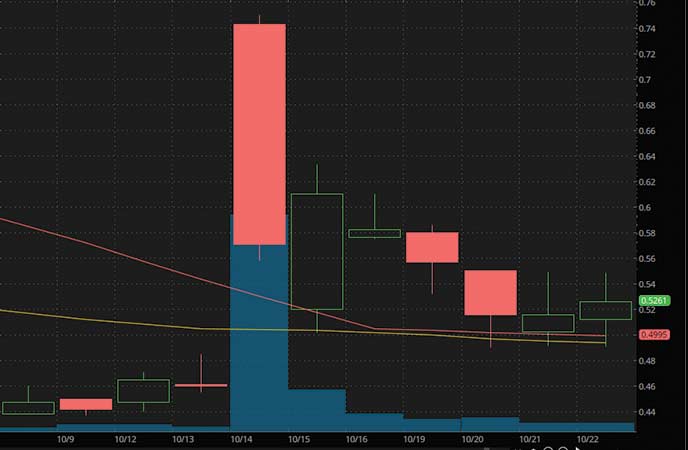