Twitter vs. Snap: Which Stock is a Better Buy?

By: StockNews.com
With coronavirus cases increasing at a rapid rate in the United States, people are spending more time on social media platforms while staying at home. With this ‘Stay-at-home’ trend, both Twitter (TWTR) and Snap (SNAP) are likely to see increased ad revenue. Let’s find out which of these two stocks is a better buy now.

Twitter, Inc. (TWTR) and Snap Inc. (SNAP) are two of the largest social media platforms. While staying at home amid the pandemic, people have been spending more time on social media. As a result, both TWTR and SNAP have been witnessing significant growth. 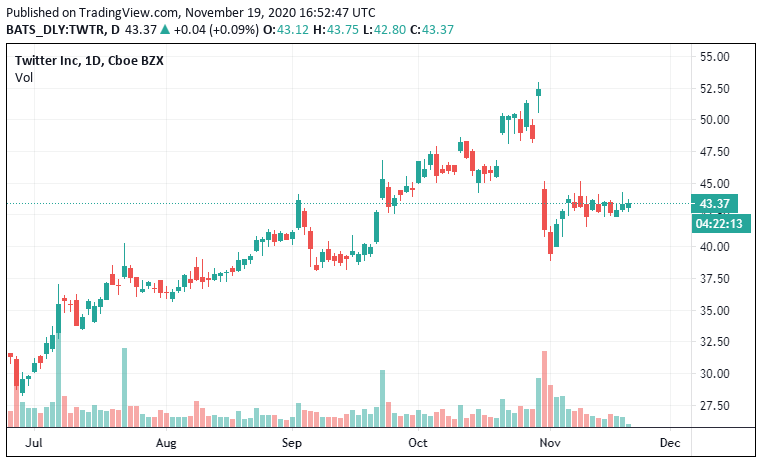 Both stocks have generated significant returns over the past three years. While TWTR returned 108.7% over this period, SNAP gained 212.8%. In terms of year-to-date performance, SNAP is a clear winner with 148.8% returns versus TWTR’s 35.2%. But which of these stocks is a better pick now? Let's find out.

TWTR launched ‘Fleets’ this week. Unlike tweets, Fleets cannot be retweeted or shared, liked, or publicly commented on. It disappears after 24hours enabling the users to post spontaneously. It is aimed at increasing the time spent by the users on the platform. The company appointed ‘ethical’ hacker Peiter Zatko as the new head of security.

Miquela, the virtual pop star and digital influencer launched a new Snapchat creator show called ‘Get real, Miquela’ on November 18th. It has 10 episodes which will be aired weekly on the platform through January 20th. SNAP is expected to acquire Voca.ai which builds AI-based voice assistants for customer support services.

TWTR’s revenue for the third quarter ended in September 2020 increased 13.7% year-over-year to $936 million primarily driven by greater investments from the advertisers.

Past and Expected Financial Performance

Thus, SNAP has an edge over TWTR here.

TWTR’s trailing-12-month revenue is 1.59 times what SNAP generates. Moreover, TWTR is more profitable with a gross margin of 63.7% versus SNAP’s 51.3%.

While TWTR is rated “Neutral” in our proprietary POWR Ratings system, SNAP is rated “Buy”. Here’s how the four components of overall POWR Rating are graded for both these stocks:

TWTR has a “B” for Trade Grade, a “C” for Buy & Hold Grade and Peer Grade, and an “A” for Industry Rank. It is currently ranked #21 out of 58 stocks in the Internet industry.

SNAP holds an “A” for Trade Grade and Industry Rank, and a “B” for Buy & Hold Grade and Peer Grade. It is currently ranked #9 in the same industry.

Both TWTR and SNAP are good investment bets considering their market dominance. However, SNAP appears to be a better buy despite trading at a marginally higher valuation based on its higher earnings growth potential, innovative features, and continued expansion.

About the Author: Manisha Chatterjee

Since she was young, Manisha has had a strong interest in the stock market. She majored in Economics in college and has a passion for writing, which has led to her career as a research analyst.

The post Twitter vs. Snap: Which Stock is a Better Buy? appeared first on StockNews.com
Data & News supplied by www.cloudquote.io
Stock quotes supplied by Barchart
Quotes delayed at least 20 minutes.
By accessing this page, you agree to the following
Privacy Policy and Terms and Conditions.