(NewMediaWire) - November 23, 2020 - Nightfood, Inc. (OTCQB: NGTF), the company pioneering the category of nighttime snacks for better sleep, today announced Nightfood’s Pickles For Two ice cream is being featured along with a Double Cheeseburger Papadia from Papa John’s in a gift pack as part of a promotional partnership.

“We’re honored to have been invited by Papa John’s to participate in this national promotion satisfying late-night cravings,” commented Nightfood CEO Sean Folkson. “We’re excited to be able to introduce our Pickles For Two, and the entire Nightfood brand, to so many new consumers.” 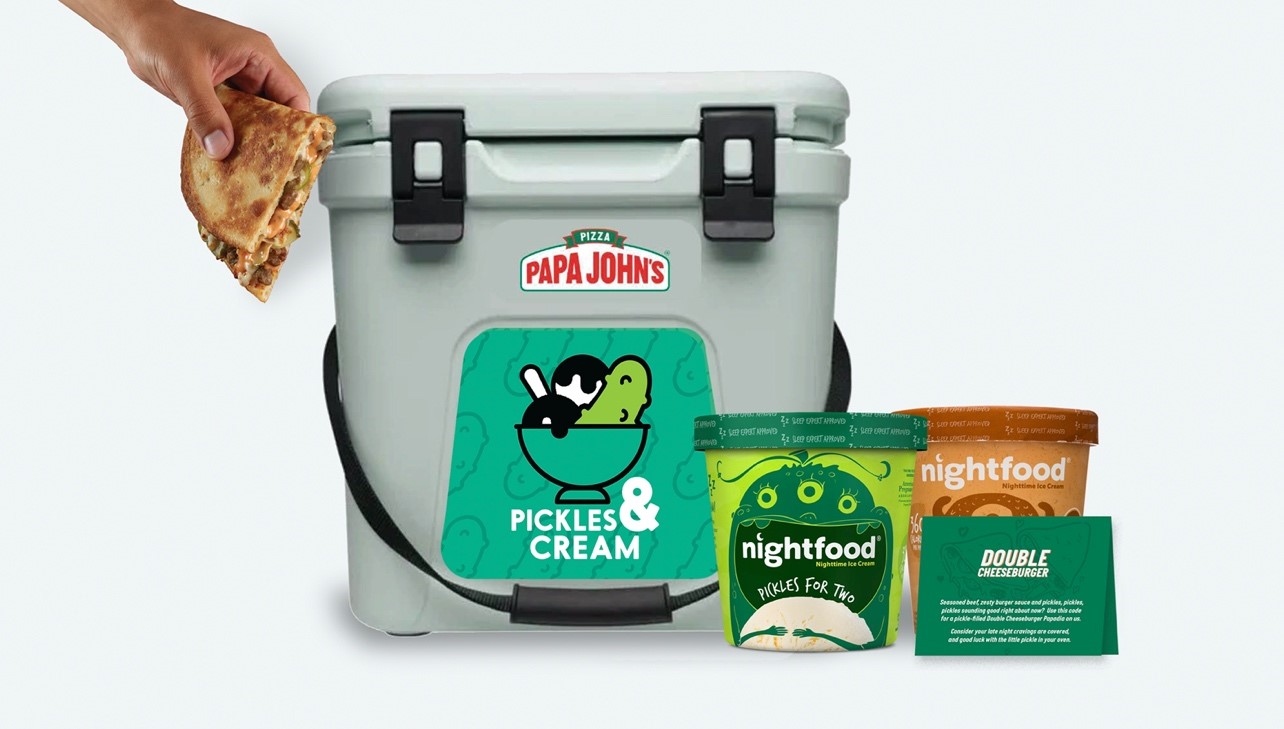 The company recently launched the Pickles For Two flavor to satisfy the two most popular pregnancy cravings: pickles and ice cream. Nightfood was named this year as the official ice cream of the American Pregnancy Association. And now, the two companies are bringing consumers the opportunity to satisfy all of their late-night pickle cravings with Pickles for Two ice cream and the Papa John’s Double Cheeseburger Papadia, which also features crunchy pickles.

As part of the promotion, influencers and other consumers were selected to receive a custom cooler, pints of Nightfood’s Pickles For Two, and of course, a Papa John’s Double Cheeseburger Papadia, delivered by their local Papa John’s location.  Nightfood ice cream is not available for consumer purchase from Papa John’s as part of this promotional partnership.

Nightfood won the 2019 Product of the Year award in the ice cream category in a Kantar survey of over 40,000 consumers. Nightfood was also named Best New Ice Cream in the 2019 World Dairy Innovation Awards.

Nightfood has been endorsed as the Official Ice Cream of the American Pregnancy Association and is the recommended ice cream for pregnant women.  There are approximately 3,000,000 pregnant women in the United States at any given time, and ice cream is the single most-widely reported pregnancy craving.  With more calcium, magnesium, zinc, fiber, and protein, less sugar and a lower glycemic profile than regular ice cream, Nightfood has been identified as a better choice for expectant mothers.

Nightfood is not just for pregnant women.  Over 80% of Americans snack regularly at night, resulting in an estimated 700M+ nighttime snack occasions weekly, and an annual spend on night snacks of over $50 billion dollars, the majority of it on options that are understood to be both unhealthy, and disruptive to sleep quality.

Nightfood was formulated by sleep and nutrition experts with ingredients that research suggests can support nighttime relaxation and better sleep quality.  Scientific research indicates unhealthy nighttime cravings are driven by human biology.  Willpower is also weakest at night, and stress is another contributing factor.  A majority of night snackers report feeling both guilty and out-of-control when it comes to their nighttime snacking.

MJ Munchies, Inc. was formed in 2018 as a new, wholly owned subsidiary of Nightfood Holdings, Inc. to capitalize on legally compliant opportunities in the CBD and marijuana edibles and related spaces.  The Company is seeking licensing opportunities to market such products under the brand name “Half-Baked”, for which they’ve successfully secured trademark rights.

Questions can be directed to investors@Nightfood.com

Management also encourages Nightfood shareholders to connect with the Company via these methods:

E-mail: By signing up at ir.nightfood.com, investors can receive updates of filings and news releases in their inbox.

YouTube: The company has established a new YouTube series which will feature weekly videos with team members, insights into latest industry developments, and provide a behind the scenes look at the latest company developments.  Click here to subscribe to Nightfood’s YouTube channel.

Papa John’s International, Inc. opened its doors in 1984 with one goal in mind: BETTER INGREDIENTS. BETTER PIZZA.® Papa John’s believes that using high quality ingredients leads to superior quality pizzas. Its original dough is made of only six ingredients and is fresh, never frozen. Papa John’s tops its pizzas with real cheese made from mozzarella, pizza sauce made with vine-ripened tomatoes that go from vine to can in the same day and meat free of fillers. It was the first national pizza delivery chain to announce the removal of artificial flavors and synthetic colors from its entire food menu. Papa John’s is headquartered in Louisville, Ky. and is the world’s third largest pizza delivery company with more than 5,360 restaurants in 48 countries and territories as of September 27, 2020. For more information about the Company or to order pizza online, visit www.PapaJohns.com or download the Papa John’s mobile app for iOS or Android.

This current press release contains "forward-looking statements," as that term is defined in Section 27A of the United States Securities Act of 1933 and Section 21E of the Securities Exchange Act of 1934. Statements in this press release which are not purely historical are forward-looking statements and include any statements regarding beliefs, plans, expectations or intentions regarding the future, including but not limited to, any products sold or cash flow from operations.

Actual results could differ from those projected in any forward-looking statements due to numerous factors. Such factors include, among others, the inherent uncertainties associated with distribution and difficulties associated with obtaining financing on acceptable terms. These forward-looking statements are made as of the date of this news release, and we assume no obligation to update the forward-looking statements, or to update the reasons why actual results could differ from those projected in the forward-looking statements. Although we believe that the beliefs, plans, expectations and intentions contained in this press release are reasonable, there can be no assurance that such beliefs, plans, expectations or intentions will prove to be accurate. Investors should consult all of the information set forth herein and should also refer to the risk factors disclosure outlined in our most recent annual report for our last fiscal year, our quarterly reports, and other periodic reports filed from time-to-time with the Securities and Exchange Commission.