By: Penny Stocks to Buy, Picks, News and Information | PennyStocks.com - Feed
These Insiders Decided To Buy Penny Stocks This Month

Penny stocks, blue-chips, small-caps, whatever your focus, sentiment is starting to play a leading role. It’s not just about the next round of Reddit stocks to watch. What began on the social media forum site has exploded across myriad outlets. Now you can find popular topics coming up on TikTok, Facebook, Twitter, StockTwits, and other sites all about “The next AMC” or “this could be like GameStop.” But cutting through all of the hyped-up “ape” posts and haphazard “research” are small nuggets of information you can use to put together a sounds list of penny stocks to watch.

The downside of social media “research” is obvious. Not all people are there to spread valuable information. Many are touting things for their own personal interests. But with such a wide birth of people looking for penny stocks to buy, there are other pieces of useful information that can send you down a rabbit hole of due diligence. For example, one of the more popular topics among retail traders, besides the next round of “short squeeze stocks,” focuses on insiders. I’m not talking about the scandalous Martha Stewart type of insider trading. I’m talking about full transparency from insiders who report their purchases with the SEC.

As far as insider activity goes, most will look for Form 4 filings. These show insiders and their different transactions. The information you’ll see is the date of the transaction(s), the number of shares purchased/sold/issued, the average price per share paid, and any footnotes accompanying the transaction. While this is the most popular Form for insider trades, there are also a few other types you’ll want to be aware of.

These are usually less frequently filed but worth knowing about. Form 3s get filed when someone first becomes an insider. Examples of this include new employees/management brought on as officers or directors of a company. This Form shows the initial ownership position in the company’s securities and gets filed within 10 days of becoming an insider.

Then you’ve got Form 5’s. These are somewhat of the “clean up” form. They’re typically filed 45 days after a company’s fiscal year-end and only required when an insider makes at least 1 transaction because of failing to report earlier or from an exemption that wasn’t reported during the year. Certain insider purchases for less than $10,000, for example, may not be required via a Form 4. But they have to get disclosed eventually, and this is where Form 5s come into the picture.

Penny Stocks To Buy [based on insider activity]

Just like analyst ratings, just because insiders are bullish, that doesn’t mean certain penny stocks are guaranteed to go up. Furthermore, some insiders subscribe to predetermined schedules of buying and selling. You’ve also got stock awards for things like employment anniversaries and stock options from contracted work for the company. This is where the footnotes come into play. Keep this in mind when you’re looking for penny stocks with insider buying. Now that we’ve got the basics covered, let’s take a look at some companies with bullish insiders in June.

Precipio has been one of the hot biotech penny stocks to watch this year. While it was bullish during the early months of 2021, the bigger attention came after announcing that its rapid COVID-19 test would be available on the Amazon platform. This news sparked a movement in the stock from under $2 to over $9 within a few days. The stock has since settled out but remains above $4 during June.

The company focuses on diagnostic products. This month Precipio launched its HemeScreen Anemia panel. The testing tool is used to help physicians address anemia of unknown causes. This news has helped spark a move in PRPO stock for most of June. Something else to keep in mind is that insiders appear to be bullish as well.

Earlier this month, Co-founder Ahmed Zaki Sabet and CEO Ilan Danieli purchased shares of company stock. Average prices ranged from $3.369 to $3.3713. Though their trades weren’t the largest on this list of penny stocks, they were notable following the big move the stock saw in May. 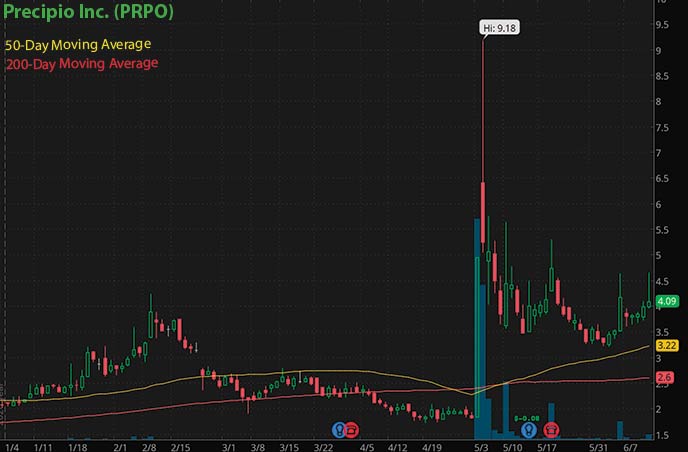 Entasis is another one of the biotech penny stocks catching a wave of trading momentum this quarter. Since early May, shares have climbed nearly 80%. The company specifically focuses on antibacterial products and currently expects Phase 3 trial data in its ATTACK study during the second half of the year. The trial is for multidrug-resistant Acinetobacter infections. Healthcare facilities are one of the more common places where this can be spread. The company also has a Phase 3 trial for its zoliflodacin treatment, which Entasis believes can provide a solution for gonorrhea.

In its last update, President & CEO Manos Perros stated that “2021 is poised to be a transformative year for Entasis as we conclude our Phase 3 ATTACK registration trial and initiate preparations to become a commercial-stage company.”

Some insiders appear bullish, ahead of any potential commercialization and the topline data readout from the ATTACK study. In this case, however, it isn’t management buying up shares but rather other biotech companies. This month, Innoviva Inc. (NASDAQ: INVA) reported the purchase of over 6.2 million shares of ETTX stock for $2. This was done via a securities purchase agreement with the company directly. Following the purchase, Innoviva showed a 75.5% stake in Entasis. Innoviva has a portfolio of royalties with respiratory assets partnered with Glaxo Group Limited (NYSE: GSK). 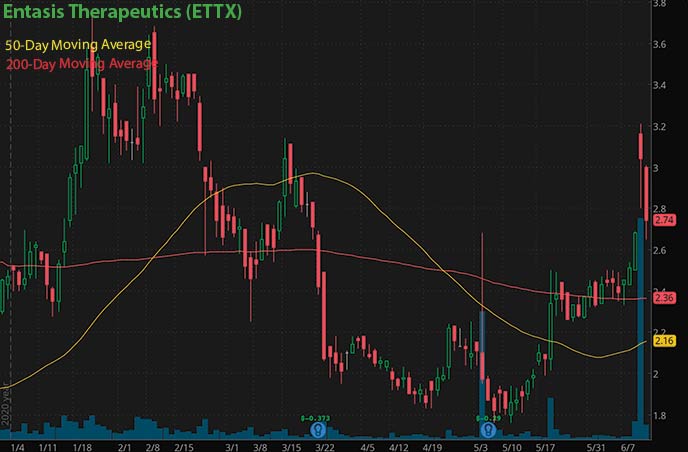 Evofem has a long history of both bullish and bearish insider activity. Last year, insider selling was a big culprit to the slide in shares of EVFM stock dropping. Despite what has happened since then, the focus is on what’s going on right now. Shares of EVFM stock have been in recovery mode for most of the last 30 days. The stock dropped in early May thanks to news of a discounted share offering.

While money is great to have, how an offering is translated in the market can be a very different scenario. Needless to say, it brought in a cool $50 million that the company earmarked for continuing the commercialization activities for its female contraceptive, Phexxi. Evofem also said it would use proceeds for ongoing developments of its EVOGUARD Phase 3 clinical trial evaluating EVO100 to prevent chlamydia and gonorrhea in women.

June has been a busy month for insider activity. In total, 6 insider trades were made, which totaled more than $124,000. The CEO, General Counsel, CFO, CMO, and multiple directors purchased shares between $1.025 and $1.31 between June 10th and June 14th. With fresh money from the recent raise and hopes of continued commercialization, do you think insiders appear bullish based on these latest buys? 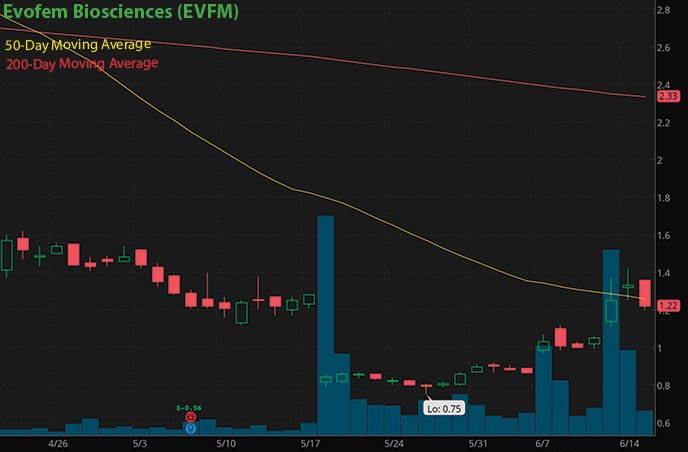 The interesting part of Ault Global is when you look at Form 4s, it’s not just for the company’s shares. Via its Digital Power Lending, LLC business, the company takes positions in other public companies. As a holding company, Ault has diversified its offering to gain exposure to everything from cryptocurrency to electric vehicles and, of course, investing. This week Ault announced that it acquired 1 million shares of common stock in the company itself.

The company’s Executive Chairman Milton “Todd” Ault, III, explained that, “This purchase of common stock by Ault & Company demonstrates belief in the progress being achieved by the Company and its subsidiaries, the strength and value of the assets of Ault Global Holdings today, and the confidence in our ability to increase shareholder value.”

With the company’s latest progress, including the latest purchase of 1 million shares, it’s important to see if any other insiders are taking a cue right now. Earlier this month, CEO William Horne purchased roughly $6k worth of DPW stock. A Form 4 showed he picked up 2,000 shares at an average price of $3.05. The purchase also included 750 shares of the DPW common stock issuable according to a stock incentive grant. 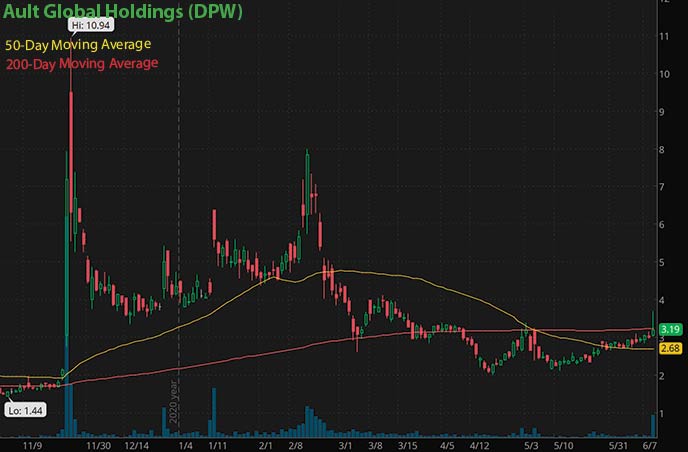 This week OpGen got off to an active start. In fact, between Monday and Tuesday, shares of OPGN stock jumped from around $2.15 to highs of $3.12 during premarket trading on June 15th. The company recently submitted an updated 510(k) summary to the FDA for its Acuitas AMR Gene Panel for isolates. It included all of the FDA’s previously requested updates and consistent with the FDA’s outlined timeline. OpGen was previously informed that the FDA intends to complete its review by the end of August.

Obviously, with infectious diseases taking up a lot of the news flow over the last year, diagnostics companies have grown in popularity. Along with subsidiaries Curetis GmbH and Ares Genetics GmbH, OpGen develops and commercializes molecular microbiology solutions to guide clinicians with rapid and actionable information about life-threatening infections.

One of the main catalysts for this week is actually based on insider activity. A few Form 4s were filed on the 14th, showing insider buys this month. Both COO Johannes Bacher and CEO Oliver Schacht picked up a total of 40,000 shares for just over $90,000. Purchases were made at prices ranging from $2.22 to $2.30. 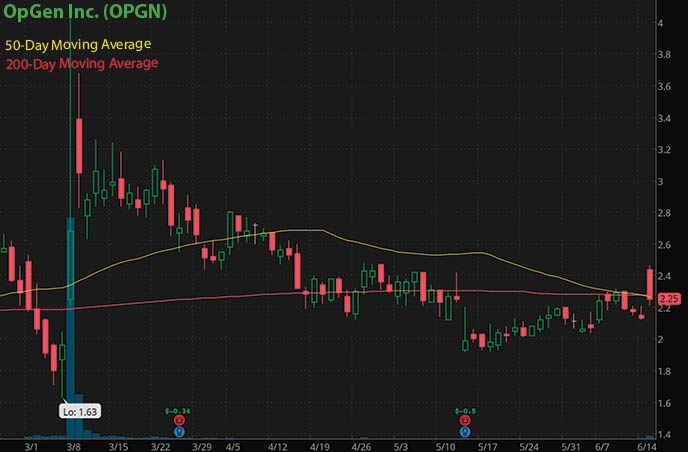 Are Penny Stocks Worth It After Insiders Buy?

This is the ultimate question. Just because insiders are buying penny stocks, does that mean you should follow? There’s no guarantee that things will perform well. But bullish sentiment from insiders is usually seen as a positive for other investors. Regardless of this as the case, make sure you are also researching more than just insider activity. Look at recent developments, see how money is being raised, understand the growth strategy (if any), and consider industry momentum.