Ripple (XRP) price explodes 40%, here is where it may go next

Ripple team has been trying to find new use cases for XRP and has started collaborating with Flare Networks to execute Ethereum’s smart contracts on the XRP ledger. As a result, the interface has allowed new possibilities to find new applications for XRP, driving Wietse Wind to come up with its own new function for smart contracts with “Hooks”.

Hooks is one of the long-awaited integrations for the XRP ledger which has offered the proprietary smart contract functionality for the first time. Head developer Wietse Wind wrote in a tweet that the code is accessible to anyone, allowing all node operators to use Hooks.

In addition to sharing the code, Wind has also published a number of commands for Docker, an application that allows executing software from code packages. The instructions were shared on Github, according to which developers must follow two essential steps.

The first step says that developers have to operate one node to see the logs and another one to enter the commands for executing the smart contracts. Wind said that new updates and adjustments will come, and added that this will be a group of key smart contract functions.

Furthermore, Flare Finance’s DeFi protocol is expected to introduce 6 different DeFi products to the market, all based on XRP that acts as a bridge currency. As a result, a multi-token ecosystem will be established that will allow users to utilize XRP in a number of different ways.

XRP/USD price gained more than 40% yesterday in one of the best daily performances in its history. The price action extended the bullish run further higher today to print $0.4967, the highest the price action traded since June 2019. 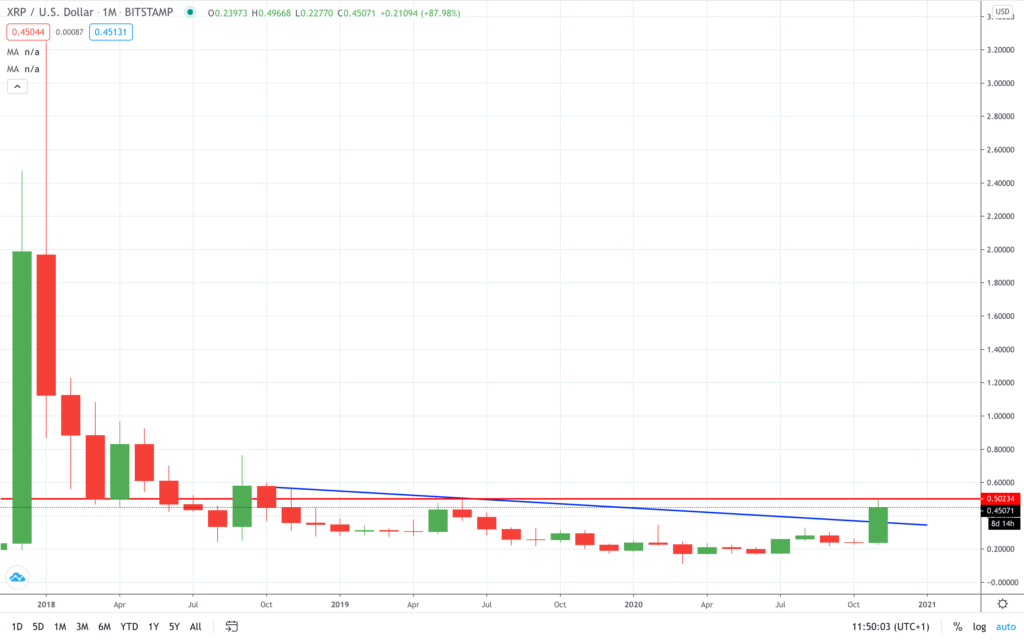 An almost vertical push higher means that Ripple now trades over 90% higher in November. Yesterday’s breakout means that XRP price now trades above the descending trend line at $0.36. A weekly/monthly close above this line will help XRP buyers to attempt a break above the next key resistance line at $0.50 and aim for $0.56.

XRP price exploded 40% yesterday to break print the 17-month high near $0.50. Elsewhere, the long-awaited smart contract feature “Hooks” launched and is now available to all developers and XRP node operators.

The post Ripple (XRP) price explodes 40%, here is where it may go next appeared first on Invezz.