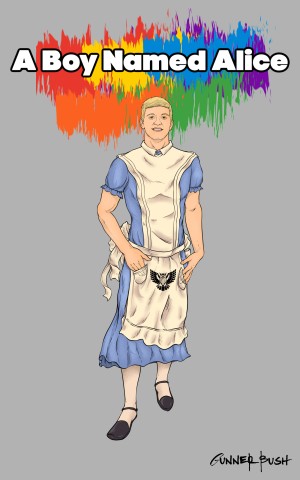 Time Upon a Once Publishing announced that their latest release, a novel by Gunner Bush, titled, A Boy Named Alice, will be available in numerous public libraries in these nine states: Alabama, California, Colorado, Georgia, Indiana, Kentucky, Nevada, Ohio, and Rhode Island.

This is the first book that Time Upon a Once, a publishing company formed in 2019, will appear in a public library, but vice president, Andrew Belcher hopes to continue this trend with future books.

“This is a fantastic opportunity for both our business and Gunner’s new book,” Belcher said.

The Time Upon an Once has created an enormous buzz around Gunner’s newest novel by giving away 2,500 copies of A Boy Named Alice during the month of August. These hard copies were all given out to free little libraries across the country.

“It was a unique idea, and we wrote in a lot of the books asking folks to email us what they thought of the book, and where they found it. It led to a lot of people actually reading the book which is what Gunner would have wanted,” Belcher said.

“Alice” is a coming of age novel written in a similar trope to Chuck Palahniuk’s Fight Club. The novel features hidden and imaginary characters, but instead of following a fight club, it follows high school students as they attempt to change the world. The novel was nominated for several major awards, and it was purchased by Time Upon a Once earlier this year.

The novel also features three different covers with one being only printed seven times.

“That’s the unique limited edition,” Belcher said. “A few (of the others) have already popped up for sale on ebay, and we did flag some of them because we really wanted people to pass this around first, but we are living in a capitalist country so we expected it. We know we cannot stop it, and we aren’t trying to stop it. The special seven with the limited edition cover are going to be worth a lot of money one day, and we put those in with the 2,500 we gave away. We haven’t seen any of those on ebay yet, so it could be that people do not know what they have yet.”