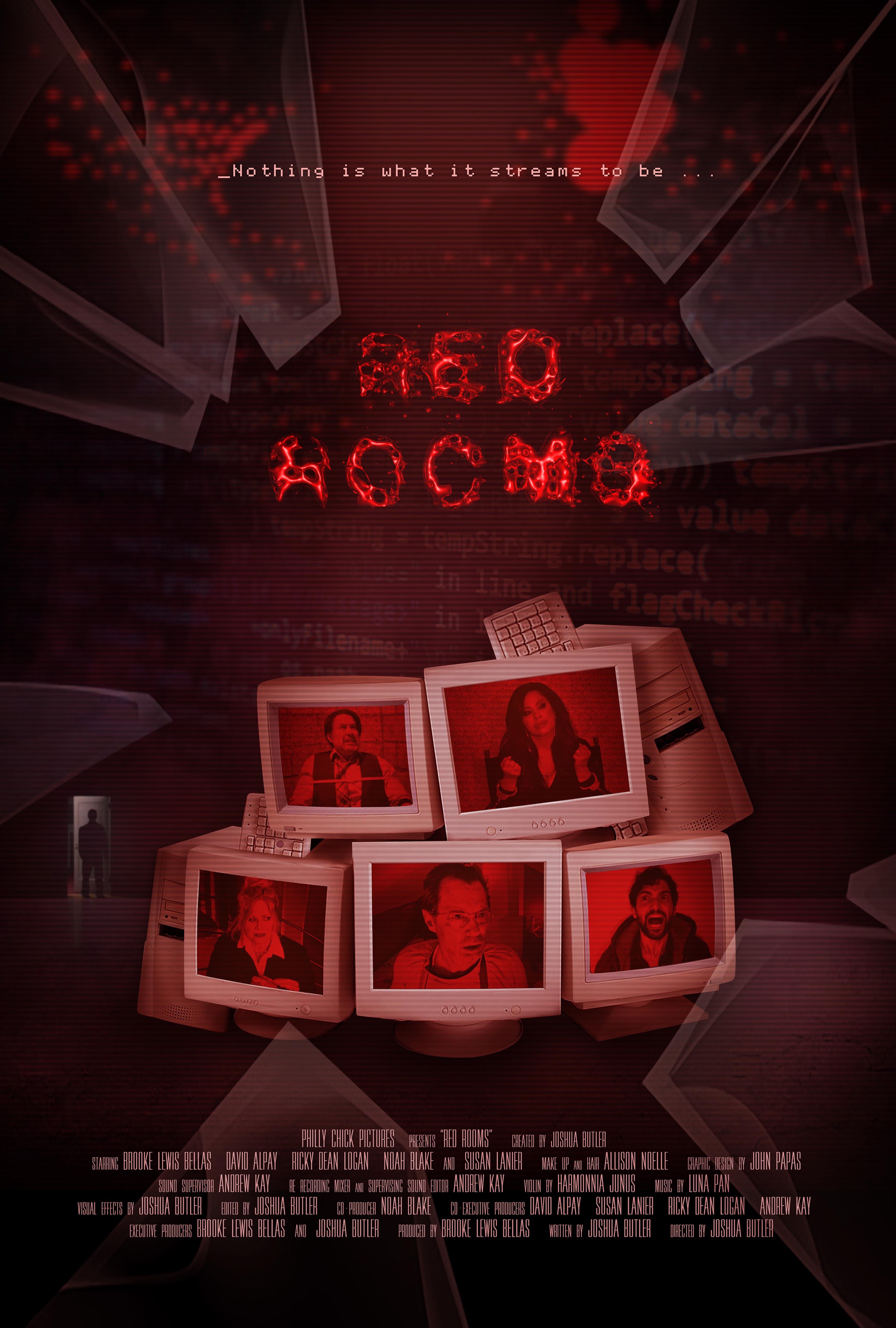 In the darkest corners of the darknet, there are terrifying places where the abducted are held captive, psychologically tortured and live-streamed. Victims are given the chance to escape if they agree to confess their worst sins to the world, preserving them online for eternity. Paid subscribers watch, listen and vote on who has committed the evilest crimes against humanity. The winner lives. The losers die. These are the infamous "Red Rooms" and this terrifying new web series invites you to take part in this diabolical dark web reality show, where nothing is what it streams to be.

Tagline: Nothing is what it streams to be.

“Red Rooms was conceived and completed out of“isolation inspiration”! Joshua Butler and I had been in-development on a project and had been reminiscing about our favorite industry days of yesteryear when we met on the horror film circuit. I had already been a superfan of Joshua’s work for years, as he truly has the creative and intellectual genius mind of a madman! In 2019, we shot a proof of concept for our project, which paid homage to his hugely successful film VLOG (2008) from the producers of SAW, that went on to become a hit TV series. I loved being directed by Joshua with his passion and intensity, so we committed to further collaborating. When COVID-19 hit Hollywood and we were all in isolation, I called for a virtual production meeting and suggested we attempt to experiment by filming each character virtually from their homes, and our incredibly talented actors David, Susan, Ricky, and Noah jumped into this virtual creative experience with us and gave more than we could have ever asked for!” - Brooke Lewis Bellas

“As a filmmaker, I have always wanted to work with the multi-talented Brooke Lewis Bellas. She is a legendary "Scream Queen", for sure, but she is so much more. Brooke is a talented actress, as well as a most savvy producer. Red Rooms was also a chance to make a kick-ass, terrifying, relevant piece of cinema within the new production-era rules that COVID-19 has written for us. During isolation, Brooke had suggested pulling a piece from another concept we had been developing, which inspired me to create Red Rooms. It's a privilege to direct such a superb cast—David, Susan, Ricky, and Noah—alongside Brooke. On a personal note, I am obsessed with the dark web. With a VPN and a Tor Browser, you can peek inside the 96% of the internet that is hidden from all of us. Once I stumbled across the infamous “Red Rooms”, available on onion sites that are untraceable and run by the most anonymous of anonymous. These sites present bitcoin-paying voyeurs with a real human being, trapped in a locked space, forced into interactive torture. I have had nightmares ever since, wondering how I would react under those horrific circumstances. As a director, I feel like the best horror always humanizes its characters, makes them relatable, and invites us to wonder how we would act at our most frightened. Red Rooms will present a world few have ever seen with characters that could be you or me.” - Joshua Butler