December 02, 2022 - Although tattoos are meant to be permanent yet at times people need to remove old tattoos for various reasons, ranging from breakup to desire for something new to job requirements. But a lot of people struggle to find the most effective tattoo removal technique. To make tattoo removal more convenient, leading Toronto-based laser treatment clinic, Laser Skin Clinic, has recently released a post about the most efficient and cutting-edge tattoo removal procedure today.

Titled “Tattoo Removal 101”, the post has shed light on the various kinds of tattoo removal techniques that have been and are followed since the yesteryears and till this date.

According to the post, there are broadly two kinds of tattoo removal techniques, non-laser and laser.

Regarding the Laser Tattoo Removal technique, the process was first invented in 1967. However, the initial laser removal method (ND: YAG laser and a 694 Ruby laser) was unsafe and crude. But the invention of the Q-Switch laser in the 1990s made the process somewhat safer. The Q-Switch process works by creating a pulsed output beam through laser light. The technique uses extreme high peak power to form light pulses that help to break the ink pigment of an old tattoo into smaller particles. The process works in just nanoseconds and has proven to be way more efficient than the traditional laser tattoo removal process.

Moving on, the advancements in laser treatment technology have led to the introduction of a far more efficient tattoo removal process today, called Picosecond laser. Cut to 2022, Picosecond Laser holds the crown of the gold standard in laser tattoo removal today for its high efficacy and safety. 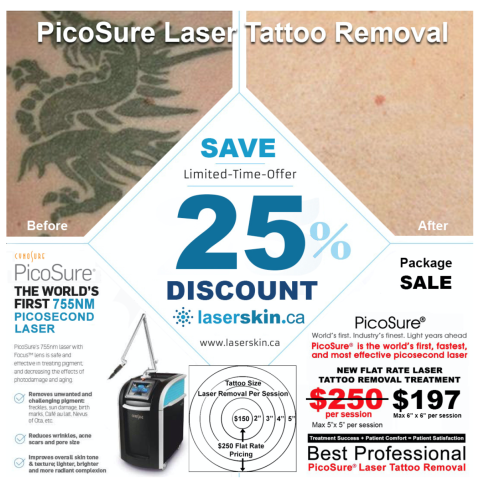 The post has especially emphasized on the new-gen Cynosure PicoSure laser that is a revolution in the laser tattoo removal scene. The PicoSure laser utilizes short pulse duration to remove tattoo pigment more efficiently than other methods.

“We use PicoSure for the most effective laser tattoo removal at our clinic because PicoSure is the #1 picosecond aesthetic laser in the world. Compared to all other tattoo removal techniques, PicoSure has proven to be more comfortable and faster than ever. Trial studies with PicoSure have reported over 80 percent overall greater tattoo clearance, and that too in case of multi-colored tattoos. Most importantly, PicoSure has been able to earn greater rate of patient satisfaction and more enhanced results in comparison to the Q-Switch technology”, stated the leading spokesperson from Laser Skin Clinic.

According to the post, the PicoSure laser treatment can fully remove an unwanted tattoo in 6-8 weeks. The process works extremely fast and takes no more than 15 minutes per session.