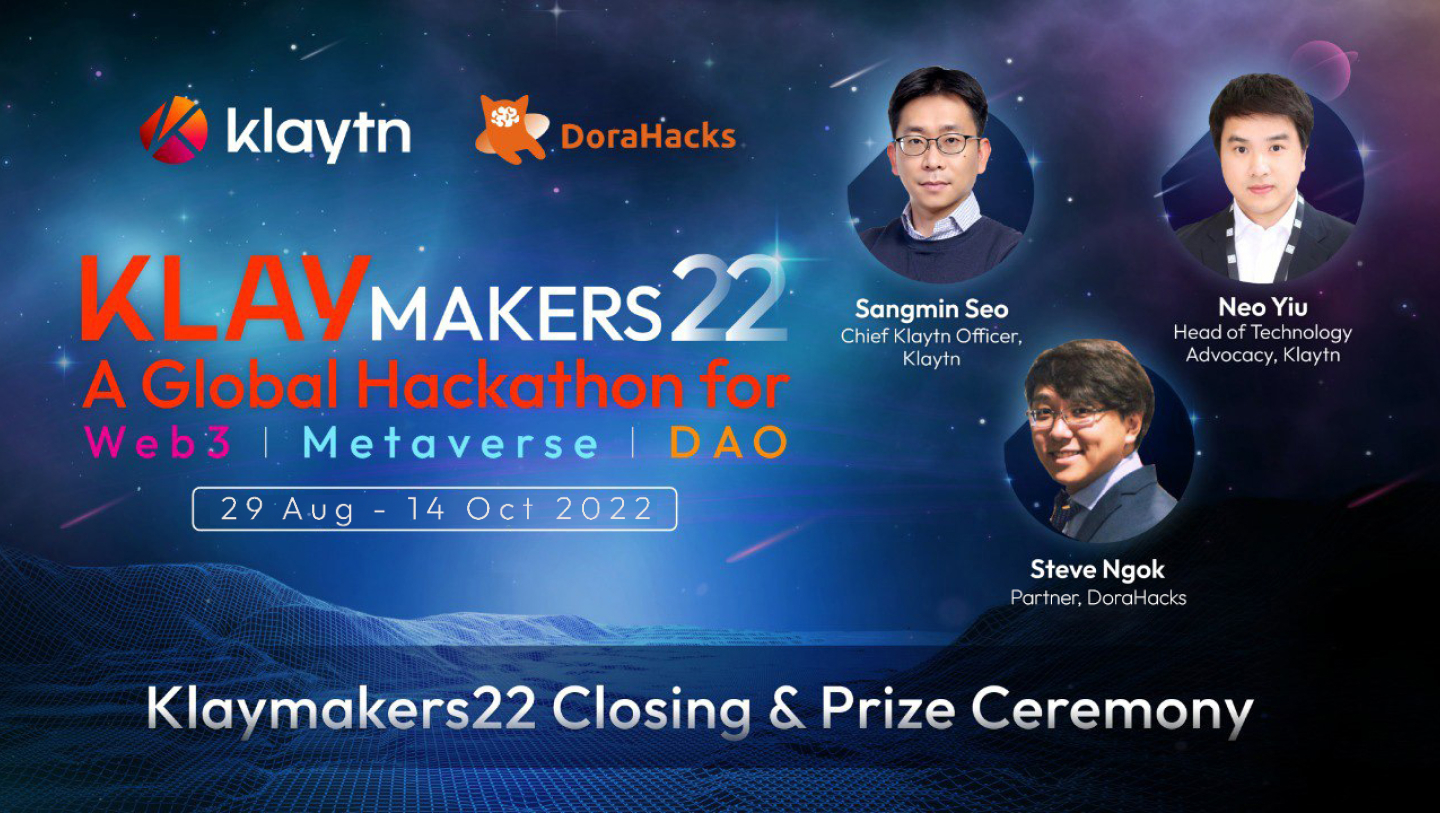 Klaytn Foundation, the non-profit overseeing growth of the Klaytn ecosystem, has announced the inaugural winners of Klaymakers22, the blockchain’s flagship web3 hackathon. 19 teams walked away with over US$1 million worth in prizes, sponsor bounty challenges, and grant and incubation opportunities.

The inaugural Klaymakers22 hackathon was conceived as a means of celebrating the web3 innovations being fostered on the EVM-equivalent network. In addition to engaging existing web3 developers, the hackathon served to onboard web2 developers to build use cases on Klaytn.

Going beyond the traditional confines of a hackathon, which gathers developers for a few days, Klaymakers22 also provided free business and technical workshops with a total attendance count of 22,948, access to Klaytn’s developer community via Discord, as well as 6 additional bounty challenges sponsored by Klaymakers22 hackathon partners.

Between August 29 and October 14, 174 submissions were made by teams building on Klaytn. At a virtual ceremony on November 18, 12 winners were announced, with use cases ranging from decentralised art generation to DAO creation and management without the need for prerequisite coding knowledge. 3 of the hackathon winners, alongside an additional 7 teams, received special mention for winning the bounty challenges.

Dr Sangmin Seo, Representative Director of Klaytn Foundation, said: “Our vision for Klaymakers22 has always been to grow the vibrancy of Klaytn’s developer community, convening bright minds worldwide to solve real-world problems. Through Klaymakers22, we’re pleased to incubate new ideas and provide a safe, helpful environment to turn such ideas into reality. We look forward to seeing how our winning projects will scale, contributing to the ease of building on Klaytn.”

Klaymakers22 was organized in partnership with Dorahacks, a global leading hackathon company connecting hackers to enterprise challenges and entrepreneurial ideas.

Steve Ngok, Partner, DoraHacks, said: “We are glad to join forces with Klaytn Foundation to support innovation, fund exciting ideas, and help global developers build their startups in Web3. We hope the teams graduating from Klaymakers22 will play essential roles in the Klaytn ecosystem. We look forward to extending our collaboration and introducing the powerful features of the Klaytn network and the strong support from the Klaytn ecosystem to more brilliant teams in the near future.”

The first round of judging was conducted by senior representatives from Klaytn and its hackathon partners. This resulted in 20 finalists being selected and tasked with pitching their builds via live demo sessions to the judging committee before the 12 winners were determined. Submissions were judged on criteria including originality, execution, and usefulness.

Klaytn is a public blockchain focused on the metaverse, gamefi, and the creator economy. Officially launched in June 2019, it is the dominant blockchain platform in South Korea and is now undergoing global business expansion from its international base in Singapore, led by the Klaytn Foundation.

Since unveiling its metaverse roadmap in early 2022, the Ethereum-equivalent L1 chain has seen many well-known companies come onboard its metaverse—including game developer and publishing powerhouses: Netmarble and Neowiz. It recently ramped up efforts to lay the foundation for the metaverse and to expand use cases.