Scientology volunteers in Hungary are helping the refugees 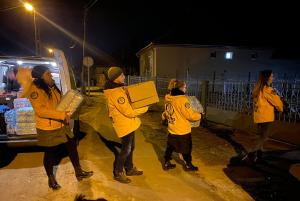 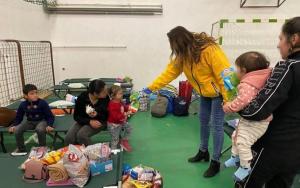 Since the outbreak of war in Ukraine, Hungarian Scientologists say they "have seen unprecedented unity" in their country

No self-interest can be so great as to demand the slaughter of Mankind. He who would demand it, he who would not by every rational means avert it, is insane. There is no justification for war”
— L. Ron Hubbard

ZAKARPATTIA OBLAST, UKRAINE, March 11, 2022 /EINPresswire.com/ -- The war is hitting once more in Europe, this time between Ukraine and Russia, with everyone else around holding their feet as to what to do and what not to do. While war keeps showing the worst consequences of it, it is also showing the best reactions of the lay people, wanting to help their fellow man in such difficult and dangerous times for society.

Scientologists are also actively involved in helping refugees. Since the outbreak of war in Ukraine, Hungarian Scientologists say they "have seen unprecedented unity in our country".

In addition to state measures, churches, NGOs, charities, foundations, companies and individuals are actively and continuously involved in providing the needed assistance in the massive flow of refugees arriving in Hungary.

The same day the war broke in Ukrain, Scientology staff and parishioners started collecting valuable goods and resources. Their volunteer ministers are distributing them day after day.

In Budapest, they have visited refugee shelters, shelter sites, and church relief organizations. In addition, they have travelled several times from the capital with several tons of donations; they visited small and large border crossings and found opportunities to deliver donations to several Transcarpathian settlements where the situation hits hard the local people. As a note, Zakarpattia Oblast (Transcarpathian region) is located in the Southwest of Ukraine; in the north, it borders on Lviv, in the east on Ivano-Frakivsk oblasts of Ukraine, in the south, it borders on Romania, in the southwest on Hungary, in the west on Slovakia and the northwest on Poland].

Many organizations donate all they can, and we can say that most of everything is needed. However, the required thing is often lacking or insufficient to fulfil the needs. Thay is the reason Time Vojtilla, the leader of the Hungarian Scientology volunteer movement, said that they "find it very effective to learn directly from each place where we go, what is it that they need. Then we rally our people and all our friends to obtain it and deliver it where is needed the most". The Hungarian volunteers are doing this with the local authorities and people working on the ground. It has proven to be what is needed. In addition to the usual durable food, hygiene, cleaning and sanitation products, soft drinks, fresh fruit, sweets for children, water and vitamins, their donations include items to fill current shortages such as mattresses, blankets, pillows, folding chairs, toys, heaters, pallets, foil, hoists, shower curtains and curtain rails, or other items needed to help accommodate the refugees.

In addition, Volunteer Ministers regularly transport refugees from the border to Budapest, where many Scientologists help to house them, provide temporary shelter for those who continue their journey, or even a home for refugees who do not know where to go nor how long they will stay. So far, they have helped more than 60 refugees in this way. A Scientology family with two young children, for example, has taken in a family of 11 from Transcarpathia for an indefinite time, as they have nowhere to go. So, in addition to the existing children, the house now has seven more children, from 2 months to 17 years old. All the children are well together now in their new home, with some cooking and helping with household chores and the others taking on tasks around the house and some already found jobs.

Scientologists from all around Europe and the world are also collecting and sending donations to Hungary and other neighbouring countries to support refugees. The Scientology Volunteer Ministers in Hungary have clearly stated that they are "ready to help the refugee situation for as long as it is needed".
Prayers and Scientology Founder L. Ron Hubbard’s Views on the Futility of War

As shown in a video that broadcasts the Scientology Prayer for Total Freedom in 10 languages, and extracted from Dianetics which was published more than 70 years ago, shortly after World War II (and relevant as if he would have written it yesterday):

“Man is now faced, by these pyramiding hatreds, with weapons so powerful that Man himself may vanish from the Earth. There is no problem in the control of these weapons. They explode when and where Man tells them to explode. The problem is in the control of Man.”

“No self-interest can be so great as to demand the slaughter of Mankind. He who would demand it, he who would not by every rational means avert it, is insane. There is no justification for war.”

Because of the above, and in addition to practical material assistance being provided to all those suffering the consequences, "Scientologists from Europe and around the world gather for prayers, to help ignite hope and collective spiritual power, to relieve those in need and to awaken the consciences of those behind the war, to put an end to it and seek peaceful understanding", said Ivan Arjona-Pelado, President of the European Office of the Church of Scientology for Public Affairs.