Naples divorce lawyer Russell Knight (https://divorceattorneynaplesfl.com/can-my-husband-or-wife-see-my-text-messages/) releases a new article that discusses how text messages are used in court during a divorce process. According to the lawyer, spouses often ask about the future during divorce proceedings. The spouse may also be wondering if the other spouse will have access to their personal text messages. 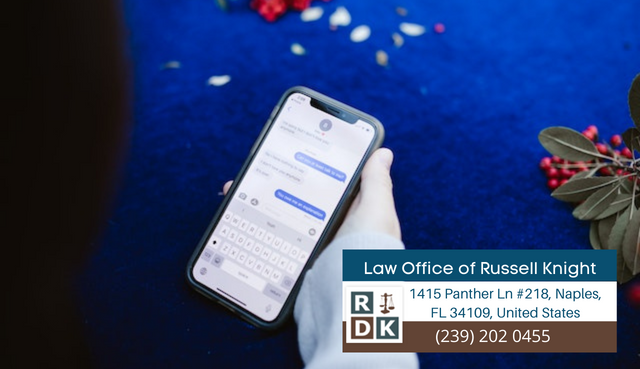 The lawyer explains that text messages can be used as any other communication. Text messages are often just a series of zeros that are recorded and stored somewhere, so it can be retrieved even after the owner turns off the phone. Once the owner turns their phone on, the messages will remain where they were.

The lawyer adds that the service provider may provide a copy of the text messages after a subpoena is served. The phone carrier can provide copies of several months' worth of conversations after the subpoena has been served. Attorney Knight also mentions that the lawyer might be able to ask the court for the husband or the wife to reveal text messages via formal discovery. Formal discovery is when one party is obliged to reveal anything requested by the other. This includes text messages.

The Florida divorce lawyer stresses that it is important to consult an experienced attorney when dealing with family law matters. A skilled attorney might be able to help clients understand their rights and responsibilities during the divorce or separation process.

About The Law Office of Russell Knight

The Law Office of Russell D. Knight was established in 2009 by the divorce attorney Russell D. Knight. The lawyer’s love for family law is demonstrated by the numerous articles personally written by the lawyer. Russell is a licensed lawyer throughout Florida and Illinois. The attorney has a legal practice in both states and employs an entire staff of paralegals and attorneys in the two states of Chicago, Illinois, and Naples, Florida. Contact them today at (239) 202-0455.

For more information about Law Office of Russell Knight, contact the company here: