OPPO Inspirational Games: Football is Full of Passion and Inspiration

SHENZHEN, CHINA - Media OutReach - 21 November 2022 - OPPO today published a documentary Inspirational Games based on three witnesses’ stories of the most inspiring games in the UEFA Champions League. The 67-year history of the UEFA Champions League is an epic full of passionate and inspiring memories. Looking at the throwback highlights, we can still feel the passion encapsulated in each moment.

For fans of the UEFA Champions League to relive the strong emotions of the most exciting games in history, OPPO hosted a global campaign to vote for the competition’s top three inspiring games of all time. This was followed by actually finding those who witnessed the game during the time, then interviewing them and finally bringing these stories of inspiration to everyone. As part of the campaign “Inspirational Games”, OPPO believes that these stories strike up conversations between even strangers and unify football fans. Furthermore, it rekindles the passion for the game to inspire more people around the world. 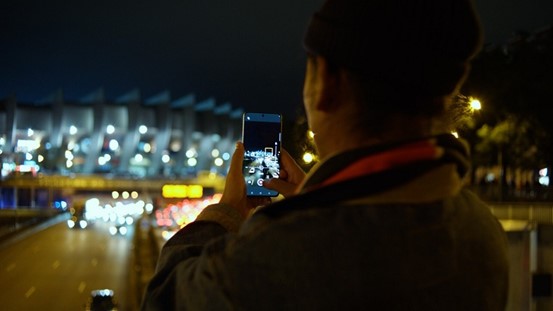 “Going to the stadium to watch a game always draws your best memory,” Nam Kunn, a graphic designer and photographer based in Paris told us, “Football always brings the strongest emotions and never makes you bored.” As a supporter of PSG since 2000, Nam was a field photographer that happened to witness the amazing 4-0 during the first leg between Paris Saint-Germain and Barcelona, and the histrionic 1-6 during the second. The strongest emotions that football gave him continue to inspire his life till this day.

As Nam puts it, supporting a club is more than a logo or a jersey. It describes your values, philosophy, and life. Deriving from his love for football, Nam was inspired to start a project to record the most inspiring moments of his travels, which include fashion, photography, and of course football. For him, football is a sport about cultural diversity. A sport for everyone to connect and share their passion.

Tonín el Torero, a hardcore fan who holds another identity as the owner of a famous pub in Madrid would agree with Nam. He shared with us the inspiring moments when his pub brought total strangers from different countries together with football. “The passion for Real Madrid builds bonds.” Tonín recalls the time fans went wild when their team scored an amazing goal. That memory was a perfect depiction of a community coming together to embrace joy and hope. 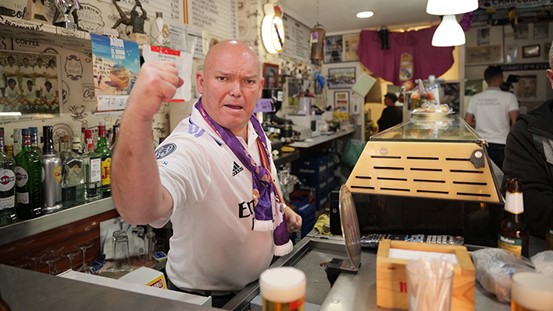 Football invokes our emotions and inspires underdogs to outperform their opponents. We’ve heard so many stories from football fans, however, OPPO is lucky to have interviewed Mike Ferney, a visually impaired fan who enjoys matches in a different way.

“How could someone who is visually impaired enjoy a football match in a stadium?” you might ask. The answer is passion. The passion for football he had since childhood has now turned into a lifelong habit, and all of the matches that he experienced have become an unstoppable force that drives him ahead.

Mike Ferney was diagnosed with visual impairment from birth, but this has not affected his zeal for football and Liverpool which started from a young age and has continued to this day. Though life with impaired vision is difficult at times, Liverpool’s victory at Istanbul moved him deeply at the age of 13. There he learned the life lesson “never give up,” and Mike describes it as his biggest takeaway from Istanbul 2005.

“It's being three nil down against one of the best teams in Europe,” Mike still remembers that feeling of intensity while recounting the story, “It could have been easy to roll over and give up, but they carried on. And I think the moment is short. Then things that happen help me believe that, even though it is football, it can be tied to a life lesson.”

Mike’s cousin Stephen assists him by giving him a visual description of everything that’s happening on the field, and he enjoys standing in the stadium to experience the matches. Because to Mike, there are more senses to feel at a matchup than simply watching. There is a special energy when you stand in the stadium with the crowd around, Mike calls it the “feeling of synergy,” and that goes beyond visual aspects to various sensations like the noise of fans celebrating and the ground beneath him shaking. Therefore, even with his visual impairment, Mike still experiences the games to a great extent and gains inspiration from football. 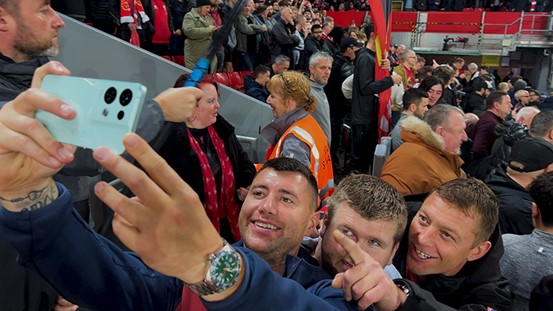 For Mike, inspiration also means never giving up his passion for life and inspiring more people with his story. When life gets tough, Mike chooses to go to matches to feel the vibe. The relentless attitude is deeply rooted into his life and also encouraged a group of fans through the bond of Liverpool. Mike started a podcast named “Unfair Rap”, where he retells his story and meets new friends with shared interests and passion. It is always a pleasure for him to inspire the people around him.

There are many people like Mike who are inspired by the passion for football, and advancements in technology allow us to better enjoy and record the game with pocket-sized devices, freezing the seconds of inspiration into everlasting memories. OPPO has been exploring more ways for people to enjoy sports under the brand proposition "Inspiration Ahead". Especially assistive technology for people like Mike who have visual impairments or other disabilities to experience more inspiration in their lives. For example, Color Vision Enhancement Technology, which made its debut on the OPPO Find X3 series, was designed to improve color identification abilities for those who suffer from color vision deficiency. Thanks to the technology, the screen displays more accurate colors.

OPPO Research Institute Innovation Accelerator, which issued a focus on accessible technology was also a success this year. The accelerator was aimed to turn world changing ideas into reality. Among the winning proposals, we were glad to see innovative ideas like “machine vision solutions for the visually impaired”, and “exclusive mobile phones for the hearing-impaired”. These proposals addressed pressing social issues that deserve our concern.

Guided by the brand proposition “Inspiration Ahead,” OPPO will continue to explore meaningful innovations regardless of the difficulties that lie ahead. The search for witnesses for “Inspirational Games” is not an ending, on the contrary, it marks a new beginning. OPPO will help more people enjoy the inspiration in life, and everyone can become a witness to their own moments of inspiration.

To watch the documentary of star witnesses, please visit: https://youtu.be/-AKaiGTHgwA